The second-quarter earnings announcement season is now underway, but reports will start coming in fast and furious in the next couple of weeks.

I also expect wave-after-wave of positive earnings results. Currently, FactSet estimates that the S&P 500 will achieve second-quarter earnings growth of 64% and sales growth of 19.7%. That represents the highest year-over-year earnings growth rate since 2009 and the highest sales growth rate since 2008. Analysts have also upped earnings estimates by 7.3% since the end of March, so even stronger results are anticipated.

Helping boost analysts’ predictions was the expectation that the big banks would release some of the billions in loss provisions they’d set aside to prepare for loan losses in the aftermath of the pandemic. That, in turn, would help boost the banks’ bottom lines.

The majority of the financial stocks climbed higher earlier in the week thanks to their better-than-expected earnings reports. Wells Fargo jumped 1.8% this week and Morgan Stanley climbed about 2.9%. However, JPMorgan fell 1.4%, Citigroup dropped 1.6% and Bank of America declined about 4.2%. 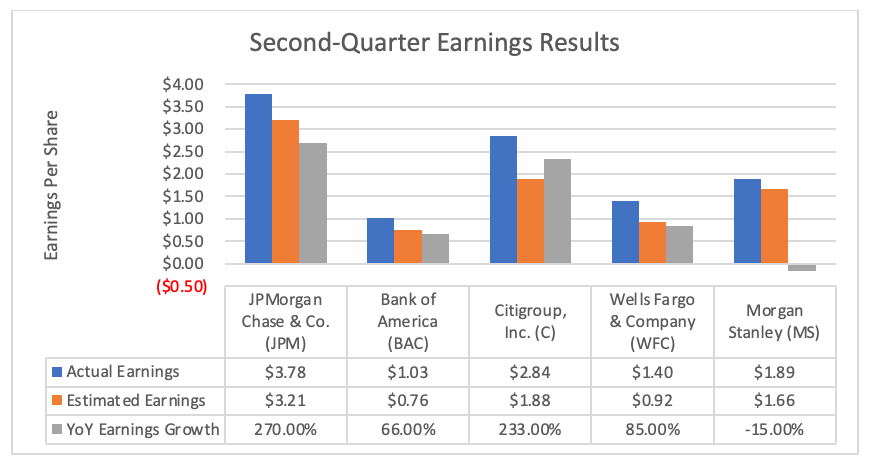 As you can see in the chart above, except for Morgan Stanley, year-over-year earnings rose in a big way for these big banks. Now, let’s take a deeper dive into their earnings results.

JPMorgan Chase beat Wall Street’s estimates on the top and bottom lines. Earnings per share of $3.78 beat consensus estimates for $3.21, while revenue of $31.4 billion beat estimates by roughly $1.5 billion. So, JPMorgan posted a 20% earnings surprise and a 2.7% revenue surprise.

The firm posted a $2.3 billion boost from releasing $3 billion in loan loss reserves after taking $734 million in charge-offs. The bank had a $5.2 billion reserve release in the first quarter.

Bank officials noted the U.S. economy appeared better off than previously estimated and expect a smaller contraction in GDP over the coming three quarters.

However, the company’s trading division declined in the second quarter, with revenue of $4.1 billion coming in just shy of estimates for $4.16 billion, and down 30% from last year.

Revenue also fell 4% from a year earlier. The company said the drop was driven by a 6% decrease in net interest income because of lower interest rates. Lower trading revenue and the absence of a $704 million gain a year earlier also hit revenue.

BAC’s results and subsequent sell-off  show the negative impact of falling interest rates on the financial sector. Banks gather deposits and extend loans; falling interest rates squeeze the margin between what they pay depositors and charge borrowers. The bank’s net interest margin of 1.61% in the quarter was below the 1.67% estimate of analysts surveyed by FactSet.

While the bank managed to barely top expectations for revenue, revenue still declined 12% from a year earlier. This was driven in part by lower results in fixed income trading, falling credit card loans and dropping interest rates.

Wells Fargo posted a second-quarter earnings beat, with earnings per share coming in at $1.40, compared to expectations for earnings of $0.92 per share. Revenue jumped 11% from a year earlier to $20.27 billion, crushing estimates of $17.72 billion. So, Wells Fargo achieved a 47.3% earnings surprise and a 14.4% revenue surprise.

Net income was $6 billion, compared to a loss of $3.8 billion in the second quarter of 2020. Income received an extra lift as the bank reduced its reserves for potential loan losses by $1.6 billion, or $0.30 per share.

My Outlook for the Rest of the Second-Quarter Earnings Season

Despite topping earnings estimates, I don’t believe the big banks’ momentum will continue in the longer term. The reality is that with the effects of the pandemic wearing off, these massive financial companies are scrambling to find a new driver of earnings.

Without special circumstances, like releasing the loan-loss reserves in the case of many of these banks, these companies would not have beat expectations.

Take JPMorgan for example. The company noted that had it not released $3 billion in loan-loss reserves it built up last year, earnings would have been $3.03 per share, just below the $3.13 per share forecast. With the release, profit came in at $3.78 a share.

Loan activity is also extremely low across the board, so investors are still wondering what the banks will use to accelerate growth in the coming quarters.

So, I’m not too excited about this sector right now.

Now, if you’re looking to shore up your portfolio with fundamentally superior stocks, look no further than my Platinum Growth Club.

Earnings reports for my Model Portfolio stocks will be coming in fast and furious over the next few weeks. And I expect their solid results to dropkick the companies’ stocks and drive them higher. If you want to get in before the stocks take off and get the most bang for your buck, now is the time to join.

My Platinum Growth Club service comes with my exclusive Model Portfolio. I handpick all of my Model Portfolio recommendations from my different stock services – Growth Investor, Breakthrough Stocks and Accelerated Profits – so you can rest assured that you’re always invested in the crème de la crème.

If you sign up now, you will be able to join my exclusive Platinum Growth Club Live Chat Event for July on Monday, July 19, at 12:00 p.m. ET. I will be discussing a wide range of topics, including my current market outlook, the second-quarter earnings season, and my latest thoughts on the “Goldilocks” environment. During this Live Chat event, I will also answer subscriber questions in real-time, so I encourage you to sign up now so you can jump to the front of the line with your question. If you’re interested, you can sign up now by clicking this link.