Tuesday kicked off with two major headlines. First, the Labor Department released its Consumer Price Index (CPI) report for June. Inflation climbed from 0.6% in May to 0.9% in June. Year-over-year, inflation jumped 5.4% – the biggest rise in 13 years. Core CPI, which excludes food and energy prices, increased 4.5% and topped economists’ estimates for a 3.8% rise.

Used vehicles accounted for the majority of the increase, rising 10.5% from May. However, this increase was largely due to the semiconductor chip shortage weighing on auto manufacturers. The truth of the matter is that new cars rely on chips. Dan Hearsch, a managing director in AlixPartner noted, “There are up to 1,400 chips in a typical vehicle today, and that number is only going to increase as the industry continues its march toward electric vehicles, ever-more connected vehicles and, eventually, autonomous vehicles.”

And second, two of the “Big Banks” – JPMorgan Chase & Co. (JPM) and Goldman Sachs (GS) – unveiled their second-quarter earnings results. JPM reported earnings of $3.78 per share on $31.4 billion in revenue. Analysts were expecting earnings of $3.21 per share on revenue of $29.9 billion, so the bank posted a 17.8% earnings surprise and 5% revenue surprise.

We’ll dive deeper into the Big Banks’ earnings reports in Saturday’s Market360 article after we hear from Wells Fargo & Co. (WFC), Bank of America (BAC) and Citigroup (C) later in the week. So, I’ll just say for now that despite the earnings and revenue beats, it’s clear the numbers didn’t impress Wall Street too much, as both stocks still opened lower this morning. I’m not very impressed either.

Personally, I’m anticipating wave-after-wave of positive results in the coming weeks, especially for my Breakthrough Stocks. My average Buy List stock is currently characterized by 94.3% annual sales growth and 477.2% annual earnings growth. And my average Buy List stock has had its consensus earnings estimate revised 33% higher in the past three months. So, the second-quarter earnings season should be stunning.

I should also add that small- and mid-cap stocks tend to act like bunnies and “hop” after their quarterly earnings announcements. Case in point: WD-40 Company (WDFC).

WDFC soared after crushing analysts’ earnings and sales estimates for the latest quarter, reported last Wednesday after the market close. Company management noted that “unprecedented demand” for its namesake products drove record sales results in the quarter, and it anticipates it will retain the customers that it gained during the global pandemic.

Thanks to the record third-quarter sales, WD-40 increased its full-year outlook. The company now expects total 2021 sales between $475 million and $490 million, or 16% to 20% annual sales growth. This outlook is nicely higher than analysts’ current forecast for full-year sales of $461.85 million. 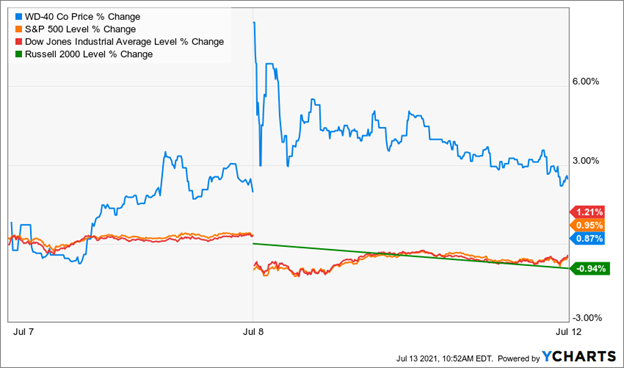 WDFC is a great example of a fundamentally superior company whose earnings dropkick and drive its stock higher. And my Breakthrough Stocks Buy List is chock-full of them. The fact of the matter is my Breakthrough Stocks have exhibited tremendous relative strength in 2021 so far. During the first six months of the year, my Buy List stocks posted an average 30% gain. This strength is certainly a good omen for the rest of the year.

It’s important to note that the second-quarter earnings announcement season will represent peak sales and earnings momentum for the S&P 500. Considering this, I fully expect the stock market to narrow. Remember, all bull markets tend to grow increasingly narrow as the stock market climbs higher, and individual and institutional investors alike will become more selective.

Considering that my Breakthrough Stocks represent the crème de la crème and the fact that many will sustain strong sales and earnings momentum, I don’t envision them being derailed any time soon. My Buy List stocks should continue to break out as market leaders in the upcoming weeks and months.

Earnings will come in fast and furious later in the month, so now is a great time to get into position before these bunny stocks start hopping again. Plus, you’ll have immediate access to my four newest buys, just released last Friday, as well as the other 33 stocks on my Breakthrough Stocks Buy list, special reports and Special Market Podcasts.