An object in motion tends to stay in motion. This expression about Newton’s first law or the physical law of inertia is true — as long as no other forces of nature act upon the object.

It’s also a notion that some people take to heart when it comes to investing – to their detriment. If a stock has gone up over the past six months, it surely will continue along its upward trajectory, or so the idea goes.

But information and circumstances change all the time, and what was great in the past may not continue to be great, and vice versa.

To believe a stock will keep going up, or down, just because of its past behavior is an example of Recency Bias in action. It’s yet another human tendency that we have to set aside before we take action in our investment portfolio. (That’s the goal of quantitative stock system like the one I’m deploying in my new Accelerated Income Project 2021, where I’m preparing a new buy alert for later today.)

In studying Recency Bias, researchers often focus on children, who display this tendency very strongly. In a 2018 study at the University of Rochester, developmental psychologists took a group of 24 toddlers and found that, given the choice between two options, the children chose the second option 85.2% of the time. The study was given the memorable title “Cake or Broccoli?”, suggesting that parents could use the technique to “trick” children into eating their vegetables.

A more recent 2020 study by Cerulli Associates and Charles Schwab Investment Management found that the investment advisors it surveyed believe recency bias is the most common behavioral bias impacting their clients’ decisions to invest.

Now, as I’ve mentioned, this is one of a series of articles: Your Accelerated Income Guide at Market360. Each day, we discuss about how I find “accelerated income” stocks like the ones I’ll recommend today. These stocks display all the signs of a huge future advance…that can provide you the extra income everyone can use … now more than ever.

So many investors have spent years getting lousy market returns and now they need a strategy to catch-up to live the life they’ve always dreamed. That’s why, in today’s essay, I’m detailing Recency Bias, how it works, and how you can avoid it.

In investing, Recency Bias occurs when a stock has momentum, either up or down. If a stock has been going up for the last 12 months, folks naturally believe it is likely to keep going up.

The inverse also happens. If a stock hasn’t gone up in a year, it seems likely to not turn around and go up any time soon.

But my strategies like The Accelerated Income Project 2021 use a consistent, proven set of criteria to lead the way. This is how you find the stocks that are about to break out to the upside – regardless of how they have performed recently.

In December 2016, the system that became The Accelerated Income Project 2021 found SINA Corporation (SINA) – an online gaming company in China. 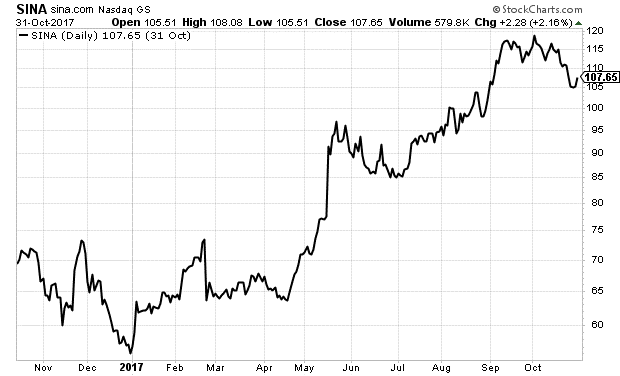 Most analysts don’t even cover this kind of stock, or they recommend one after its big run up. That’s where Recency Bias can cost you money.

However, as we just saw, if you can find the right stock BEFORE that next major event, you can make large gains in a much shorter period of time.

Don’t let your future be governed by Recency Bias. Instead of eyeballing a stock chart and seeing how it has performed lately, my system runs the numbers using thousands and thousands of points of data (fundamental as well as momentum indicators). It finds the very best names and sends me an alert that a stock is about to skyrocket. Because the alert is developed using only data, I don’t have to worry about falling victim to Recency Bias.

Instead, you can go back to investing in your retirement. And if you’ve already started investing, the gains with The Accelerated Income Project 2021 expecting some of the fastest gains in my career – we’re talking about moves of 100%, 200% and even 500% in weeks or months, not years.

That being said, the key is not to get impatient or greedy. My system isn’t capable of that; it simply looks for the same precursors that have portended every great stock play of my career. Click here to find out more and get my newest buy alerts.

I’ll detail these two new buys, a commerce media platform and a high fashion designer and retailer. They may sound very different – but crucially, both have the fundamentals required to keep them firing on all cylinders.

Both companies have been beating expectations and seeing Wall Street analysts revise future expectations higher. This is a reliable signal of a big stock surge – and I don’t want you to miss out.

Between the glimpse at this stock-picking methodology and potential access to its hottest stock picks, you’ll want to see what I’ve shared in my Accelerated Income Project 2021 presentation.