Back in his 2017 Berkshire Hathaway shareholders letter, legendary investor Warren Buffett addressed the matter of sudden stock price declines with a witty aphorism.

“The light can at any time go from green to red without pausing at yellow,” he wrote.

Buffett was making the case for why you shouldn’t borrow money to buy stocks. The bottom line is that you never know when a stock is going to experience a rapid selloff, resulting in a major loss and little left in your bank account.

However, Buffett’s traffic light analogy is even more relevant today as the S&P 500 and NASDAQ hit new intraday highs on Friday. Looking ahead, though, I expect the market will narrow as investors focus on stocks with superior fundamentals, while those with weak fundamentals will really take in on the chin.

Case in point: Nikola Corp. (NKLA). You might recall that the electric vehicle (EV) maker was all the rage when it IPO’d on the NASDAQ back in early June 2020, as investors flocked toward a host of companies with big plans for the massive EV trend.

On June 9, just five days after its IPO, Nikola skyrocketed to its 52-week high of $93.99 — rising 150% above its $37.55 per share IPO price. The company briefly reached a market cap higher than that of Ford Motor Company (F), without selling a single vehicle to the public.

Unfortunately, it’s been downhill for the stock ever since. And nowadays, it’s a cautionary tale of how even the biggest gain means nothing unless you make it a realized gain… cash in the bank.

I’d been critical in the past of electric truck company Nikola’s flamboyant founder and former chairman, Trevor Milton. Unfortunately for shareholders, in September 2020, U.S. securities regulators and the Justice Department began an investigation into whether the company under his leadership misled investors about its claims to own proprietary technology.

Milton quickly resigned on the news and the stock tanked over 19%… and kept falling.

General Motors (GM) initially announced it would partner with Nikola to help get its electric pickup truck off the ground, but later backed out of purchasing an 11% stake in the company as Nikola pivots to producing its hydrogen fuel cell technology.

In March, the stock began dropped heavily again after a major company investor, Hanwha of South Korea, said it would sell its 5.65% stake in the company. Nikola hit a low of $9.37 per share on April 21, dropping over 90% from its initial high. The stock has bounced back a bit, and is trading below $17 per share. That’s still a long way from its early peak. 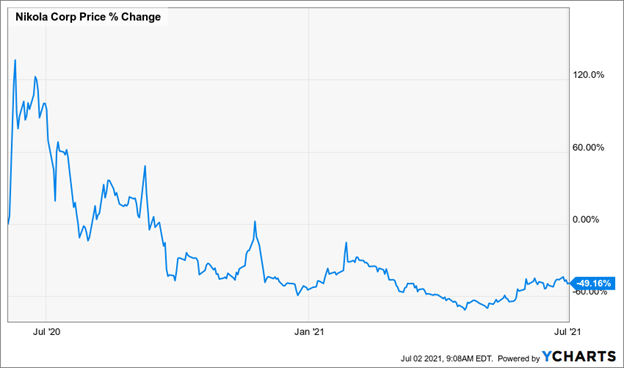 The reality is the stock doesn’t yet have the fundamentals to back up its performance. The company has missed half of its earnings estimates since going public in June 2020.

Sooner or later, that will catch up to you, and investors will wish they locked in profits while they could.

Nikola’s meteoric rise clearly has very little to do with the numbers…and a whole lot to do with investors’ emotions. In fact, there’s even a name for it: Crowd-Seeking Bias.

In contrast, I’ve adjusted my quantitative investing analysis to focus on “accelerated income” stocks: the ones that can shoot up quickly on their own merits … and thus provide you the extra income everyone can use … now more than ever. That’s what we’ve been discussing here in Market360, in this series of articles: Your Accelerated Income Guide.

But first, you’ve got to set your human emotions and biases on the sidelines. So, in today’s Accelerated Income Guide, I’ll detail Crowd-Seeking Bias, how it works, and how you can neutralize its negative effects.

But while following the crowd CAN result in great momentum plays… you don’t want to do so blindly.

The crowd-seeking I’m talking about – follow the herd, think later – is responsible for a lot of failed investments, just like Nikola. It means you won’t pick up on a shift in the trend. Thus, you’ll get your timing all wrong. You’ll often end up buying near the highs and selling near the lows.

In other words, look for a company that’s still growing like crazy – in terms of sales, operating margins, and especially earnings. Whenever its stock experiences a sell-off… then that’s a great opportunity. And those fundamental factors are exactly what I’ve designed my system to detect.

In total, there’s eight factors to look for. Apply them to the fastest-moving stocks around, and that’s the basis for my newest endeavor, The Accelerated Income Project 2021.

Once you have these eight indicators in mind, the results can be phenomenal. For example… 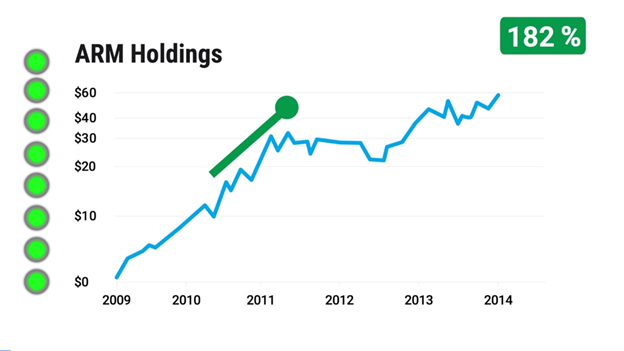 This stock was going nowhere for several years. During this time, the company showed six of the eight indicators for The Accelerated Income Project 2021.

Then one March, things changed. ARM registered all eight indicators…and shortly after, the company’s stock took off. Shares jumped 182% over the next 11 months! This would’ve handed folks the chance for $9,100 in extra cash for every $5,000 invested.

But in February of the following year, the company’s performance started to fade. Specifically, two of my indicators dropped off. That’s what The Accelerated Income Project 2021 picks up on, and I decided to take this cue to get out. Shortly after, the stock flattened out.

With this concept, we found:

And by locking in those gains, we’ve got literal cash in the bank. That’s the beauty of The Accelerated Income Project 2021: it gives you real income.

Secure Your Financial Future In Weeks Or Months – Not Years

People have used my quantitative system to invest in blue chip stocks, or to find small caps that can grow 10X. But now I’ve adjusted my proven investing analysis to focus on the stocks that are set to soar … like coiled springs … in just a short time period.

You won’t have to wait years for double- and even triple-digit returns with my Accelerated Income Project 2021. I’ve designed it so you can get the income you need on a regular basis. And no: It doesn’t require using options or any “trick” investing.

So many investors have spent years getting lousy market returns and now they need a strategy to catch-up to live the life they’ve always dreamed. In my next article for Your Accelerated Income Guide, we’ll talk more in-depth about my quantitative approach and the extra criteria that indicates an “accelerated income generator.”

Then make sure to keep an eye out for my next article to learn how to achieve financial freedom much faster. Or you can get started by signing up now. If you sign up now, you’ll have immediate access to two brand-new stock recommendations I released this past Tuesday and will be first in line to receive my next recommendation on Wednesday, July 7.

Every stock features strong earnings and sales growth, as well as increasing institutional buying pressure. That makes now the right time to embark on our new hypergrowth initiative.

P.S. In observance of the July 4th holiday, the stock market and the InvestorPlace offices will be closed Monday, July 5. I hope you have a happy and safe Fourth of July holiday!