As you may recall, PFE, which partnered with BioNTech (BNTX), and MRNA both received an emergency use authorization (EUA) from the FDA in early December 2020 for their mRNA vaccines. PFE’s vaccine was found to be 95% effective at preventing symptoms of COVID-19. Moderna’s vaccine was said to be nearly as effective, at about 94%. Both vaccines required two doses.

Johnson & Johnson’s one-dose COVID-19 vaccine revealed it was approved by the FDA for emergency use authorization in late February. However, the FDA and CDC recommended pausing the vaccine on April 13, 2021, following reports of six women developing thrombosis, a rare blood clot disorder, following their vaccination. The stock stumbled on the news, slipping as much as 2.6% on April 14.

This pause was lifted on April 23, 2021, after it was determined that the risk of developing thrombosis was very low for women between 18 year old and 49 year old. The risk was even lower for women aged 50 years or older, as well as men of any age.

Novavax initially planned on filing for FDA emergency use authorization for its COVID-19 vaccine (NVX-CoV2373), which uses recombinant nanoparticle vaccine technology instead of mRNA technology, in the second quarter. However, company management announced on May 10 that it didn’t expect to produce its goal of 150 million COVID-19 vaccines per month until the fourth quarter. Previously, Novavax anticipated achieving this goal in the third quarter.

As I explained to my Growth Investor subscribers, the main reason for the slower ramp up in production is that Novavax doesn’t expect to file for an emergency use authorization for its vaccine until the third quarter. Novavax noted the delay comes on the heels of limited supplies and equipment necessary for producing the vaccine.

Company management commented, “We know that we’re delayed from where we thought we’d be at this point. Now we’re giving guidance that nearly all of the major challenges have been overcome, and we can clearly see the light at the end of the tunnel.”

The good news, though, is that Novavax released better-than-expected results for its first quarter in fiscal year 2021. The company reported a first-quarter earnings loss of $223 million, or a $3.05 per share loss, and revenue of $447 million. That compares to analysts’ estimates for an earnings per share loss of $3.60 and revenue of $233.9 million.

Regardless of the positive earnings results, the stock dropped nearly 14% the following day and 25% overall for the week.

Novavax is Ready to Apply for Emergency Use Authorization

However, Novavax is finally ready to apply for emergency use authorization. On Monday, the company announced that NVX-CoV2373 is 100% effective at protecting vaccinated recipients from moderate and severe cases, as well as a 90.4% overall efficacy rate. In addition, its side effects were found to be more tolerable, with the most-common side effects being fatigue, headache and muscle pain, which disappeared in less than two days.

The stock rallied 7.5% in early trading on Monday before pulling back in the afternoon. Competitors PFE, MRNA fell 1.3%, 5.2%, while JNJ ended the day slightly positive.

So, now that Novavax is ready to play in the big leagues with Pfizer, Moderna and Johnson & Johnson, is it a good buy?

According to my Portfolio Grader, that would be a “yes.” 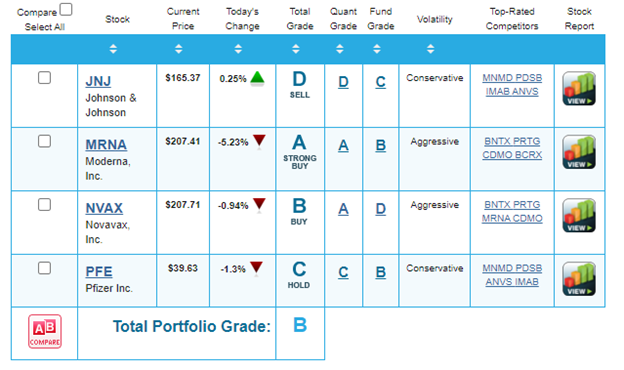 As you can see in the Report Card above, Novavax earnings a B-rating, making it a “Buy” right now. The reality is that even though the stock is seeing intense buying pressure, as evident by its A-rating for its Quantitative Grade, Novavax’s fundamentals are weak. The company posted an earnings loss in the first quarter and is expected to report another earnings loss in the second quarter. Currently, the analyst community is calling for an earnings loss of $3.63 per share and revenue of $387.87 million.

Now, you might think that I would consider Moderna the best buying opportunity due to its A-rating. However, I actually like Novavax more, which is why I recommended it in Growth Investor back in August 2020. The truth of the matter is Novavax is being funded by both the federal government and the Bill & Melinda Gates Foundation. Back in July 2020, the company revealed that it would receive $1.6 billion in funding from Operation Warp Speed. The Bill & Melinda Gates Foundation committed $15,000,000 in grants to Novavax.

The company also struck deals to supply a coronavirus vaccine, contingent on approval or emergency use authorization, to countries such as Britain, South Korea, the U.S. and India. In fact, the Serum Institute of India announced this morning that it will produce Novavax’s vaccine. So, even though nearly 44% of Americans have been fully vaccinated, there is plenty of profit potential for the company outside of the United States.

The bottom line: There is significant potential upside for Novavax, despite its 10% drop in afternoon trading. And as that potential is realized by investors, I look for the stock to head higher.

P.S. There’s a great divide opening up in America and investing in my Growth Investor stocks will help get you on the right side of it. On one side is a new aristocracy that’s amassing more wealth more quickly than any other group in American history. For people like me, the one percent, life has never been better, more prosperous.