In case you missed it, Volkswagen Group (VWAGY) held its “Power Day” on Monday and announced several exciting developments with their electric vehicle (EV) models.

During the event, Volkswagen focused on their efforts to reduce the cost of producing the batteries for their vehicles by up to 50%, which would make their EVs a more affordable option. This is in efforts to accelerate the shift away from gas-powered cars.

The company, which is the second-largest automaker in the world based on sales, also announced that they are going to build multiple battery factories around the world and greatly expand their network of charging stations.

Their ultimate goal, however, is to shift to solid-state battery technology, which has longer range and quicker charging times, and are the two largest hurdles for mass EV implementation.

Of course, Volkswagen’s “Power Day” is a response to Tesla, Inc. (TSLA)’s “Battery Day” held last year, which touched on many of the same topics, like battery improvements, charging and ways to make EV more affordable.

However, it seems that Volkswagen is now crushing Tesla in every category. While Tesla may have up to three gigafactories in conjunction with new manufacturing plants, VW is opening six gigafactories in Europe alone.  VW is also intending to have more charging stations than Tesla in China and Europe, which will charge their EVs faster due to better cooling for their EVs.

While Tesla tends to make the headlines with their flash, VW Group already has more EV models than TSLA, and with their Audi and Porsche brands, now has 13 EV models that will soon expand to 25 in the coming years. I think this sets VW group on track to pass Tesla in worldwide EV sales by 2023.

And based on VWAGY’s stock performance, investors are clearly excited. The stock soared more than 21% this week, while TSLA slipped more than 6.5%. 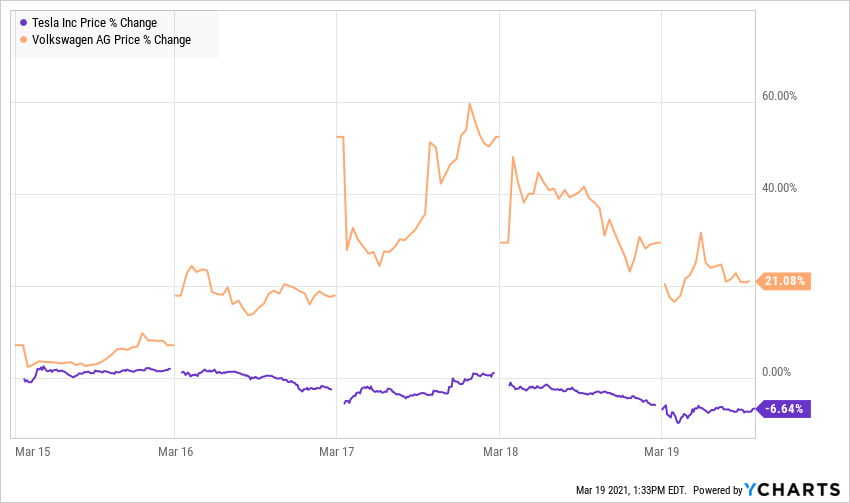 But don’t let me mislead you into thinking I am backing VWAGY – I have found a much better horse in the EV race.

My Pick for the Electric Vehicle Industry

It’s clear that the automobile industry is also slowly turning into a battery-making industry! While my pick for the industry may not be as flashy as TSLA or even Volkswagen, I believe it provides an even better opportunity.

It was the first company to develop generators for home use back in 1959 in Wales, Wisconsin. Founder Robert Kern started the company with only five employees and his own personal generator designs. Thanks to a strategic, decades-long partnership with Sears, the company’s generators were marketed under the Craftsman brand well into the 1990s.

Generac has also developed its own clean energy power storage system, PWRcell. The PWRcell stores energy from solar panels or the electric grid, ensuring that your home is never without power in rolling blackouts or other power outage situations. The system can provide up to 11 kilowatts of backup power.

Natural gas is now banned in all new residential construction in California, and solar is mandatory. But renewable energy has yet to replace the closed power plants’ output. In fact, California Governor Gavin Newsom admitted that, by shutting down big natural gas plants, the state was not fully prepared for the shift to alternative energy.

So, more and more Californians are rushing to install either Generac’s or Tesla’s backup power systems. But, given Generac’s vast dealer network and strong fundamentals, expect Generac to beat Tesla. Just take a look at its latest earnings report.

Looking forward, company management expects “2021 to be another very strong year given the significant momentum for our residential products and an expected return to growth for our C&I products.” As a result, Generac Holdings expects full-year sales growth between 25% and 30%.

GNRC is the perfect example of the type of growing company that investors will rotate to as Wall Street looks past the hype and focuses more on company fundamentals.

This is especially important as the first-quarter earnings season kicks off in mid-April. This will be another phenomenal earnings season, thanks to easy year-over-year comparisons. I look for GNRC to post another strong earnings quarter, as well as my Growth Investor Buy Lists stocks. They are chock full of fundamentally superior companies, and I expect investors to gravitate to my high-quality stocks and drive them higher as they post wave-after-wave of positive earnings.

If you want to get into position to ride the next earnings wave, please join me at Growth Investor today.