Sales of automobiles are exploding in China a year after the pandemic forced manufacturers to temporarily shutter their plants.

In January, passenger car sales in China climbed 25.7% year-over-year to 2.16 million vehicles, making it the strongest month since September 2016, according to the China Passenger Car Association.

Ford Motor Co. (F) is delving into the Chinese market as well. Last month the company said it will build its Mustang Mach-E electric vehicle in China for the first time as it seeks more business in the country.

On Wednesday, General Motors Co. (GM) reported that it beat Wall Street’s top- and bottom-line expectations for the fourth quarter. Sales of $37.5 billion beat estimates for $36.12 billion by 3.8%, while earnings of $1.93 per share topped analysts’ consensus of $1.64 per share by 17.7%.

In other words, the industry has had a nice start to the year, particularly in China. However, these car makers are contending with an issue that could put a damper on those great sales figures in upcoming months.

AlixPartners anticipates the shortage will shave $60.6 billion from the global automotive industry in 2021. IHS market expects 672,000 fewer automobiles will be built in the first quarter because of the shortage.

These semiconductor chips have become integral to powering the entertainment systems and driver-assistance functions, as well as the power brakes and steering used in modern automobiles. And automakers need more of them — up to hundreds— in each new car.

At the same time, demand for laptops and cloud computing services has soared under the pandemic lockdowns, which has further fueled the demand surge. Semiconductor manufacturers also say rising interest for the new chips that go into 5G phones has slowed their capacity.

Orders for new chips that typically get filled from eight to 10 weeks are taking as long as six months to fulfill, leaving automakers and consumer-electronics manufacturers to scramble over limited supply.

The Biden administration is jumping in to help. It said on Thursday it will issue an executive order to identify and act to relieve supply chain choke points.

As you can see below, Ford and Honda are a HOLD right now in my Portfolio Grader, with a “C” and “D” Quantitative grade, respectively, that represents institutional buying pressure.

General Motors is still a “Buy,” yet it and other major carmakers like Volkswagen AG (VWAGY) say they’re also being forced to cut production in China, just as sales have been rising. Fitch Ratings analysts expect global brands will be more impacted by the chip shortage than Chinese companies.

Interestingly, the situation bodes well for fundamentally superior semiconductor stocks, one of the hottest new sectors right now. Especially Taiwanese semiconductor companies that create the chips that go into the LED and OLED displays in cars.

The world’s largest contract chipmaker recently said it will ramp up its capital investments by 47% this year over last in light of the increased demand.

The stock has soared over the past year, rising nearly 134%. That’s more than double the industry benchmark, the iShares PHLX Semiconductor ETF (SOXX), which has climbed 63% over the same timeframe. 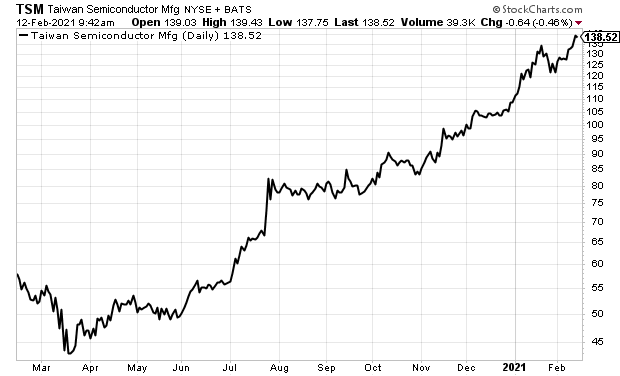 Part of the rise is thanks in part to its strong fourth-quarter earnings report, which was released on January 14.

The company reported it achieved earnings of $0.97 per ADR and sales of $12.68 billion in the fourth quarter, or 23% annual earnings growth and 22% annual sales growth. The consensus estimate called for earnings of $0.94 per ADR on $12.91 billion in sales, so TSM posted a 3.2% earnings surprise and a slight sales miss.

TSM also noted that it experienced strong demand for its 5-nanometer technology, thanks in part to 5G smartphones and high-performance computing. The company expects this trend to continue in the first quarter of 2021, which will support higher sales of its semiconductors.

In the past 90 days, three analysts have upped their earnings estimates for the company.

So, it should come as no surprise that the stock has an “A” grade and is a Strong Buy in my Portfolio Grader. It’s also hovering just above my “buy below” price on my Accelerated Profits Buy List, making it a screaming buy on dips.

TSM hit a fresh 52-week high of $137.25 on Thursday, and I’m anticipating it will maintain its upward trajectory, in part, thanks to the severe chip shortage underway.

Thanks to my Project Mastermind system, my Accelerated Profits subscribers have been able to enjoy TSM’s ride higher, as it flagged this stock back in November 2019. The reality is my system finds fundamentally superior stocks that boast increasing sales and earnings growth and positive guidance, and my Accelerated Profits subscribers reap the rewards.

For example, my Project Mastermind system also spotted another Taiwanese chip leader, United Microelectronics Corporation (UMC), back in March 2020, and I promptly recommended it to my Accelerated Profits subscribers.

The company has beaten Wall Street’s earnings expectations for the past three quarters in a row.

The stock trekked higher since its latest announcement on January 27, when the company reported an earnings surge of 166.7% year-over-year and a whopping 166.7% earnings surprise. Over the past six months, the stock has soared 160%, compared to the 46% gain for the iShares PHLX Semiconductor ETF. 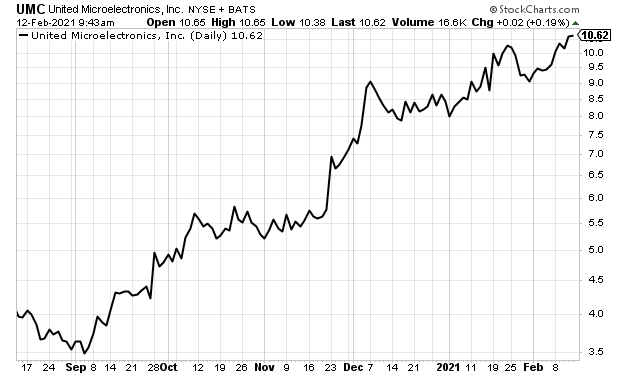 As you can see below, UMC also earns a Total Grade of “A” rating in my Portfolio Grader and remains a “Strong Buy” right now on my Accelerated Profits Buy List.

But these are far from the only fundamentally superior stocks my Project Mastermind system has found.

These stocks have trekking nicely higher in recent weeks, but it’s not too late to jump in. As with UMC, both names are still under my buy limit prices, so now is the time to join Accelerated Profits before these stocks really take off.

To learn more about my Project Mastermind system and my latest buy recommendations – I’ve recommended six in the past three weeks – click here now.