Even with the coronavirus pandemic, 2020 was still a strong year for renewable energy. In the first quarter of 2020, renewable energy increased 1.5% from the same quarter a year ago. The rise was thanks in part to a 3% bump in renewable electricity generation and more wind availability in the U.S. and Europe.

The growing demand was evident in the Invesco Solar ETF‘s (TAN) parabolic rise, which tracks renewable energy stocks. From December 31, 2019 to December 30, 2020, TAN surged a stunning 234%. 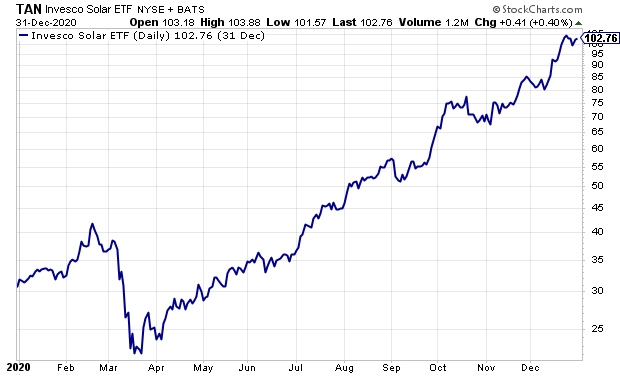 And it doesn’t look like the renewable energy sector will be slowing down anytime soon.

By 2027, the renewable energy market is estimated to be worth $2.9 billion, an 8.53% compound annual growth rate, according to Market Research Future. The reality is there’s been a big push for clean energy in recent years. 80% of the world’s biggest economies have pledged to be net zero by 2050. 284 multinational companies also pledged to be 100% clean energy.

This includes Amazon (AMZN), whose goal is to run on “100% renewable energy” by 2025. Recently, company management announced that it is buying 380 megawatts (MW) of wind energy from wind farm Hollandse Kust Noord. The plant is set to be operational by 2023, and it’s estimated to generate 3.3 TWh (terawatt hours) each year.

Goldman Sachs (GS) has gone so far as to state that “Renewable power will become the largest area of spending in the energy industry in 2021 … we see a total investment opportunity of up to $16 trillion by 2030.”

Here in the U.S., the renewable energy sector is set to benefit from the Biden administration’s clean energy initiative, as it is wants to invest nearly $2 trillion in clean energy. So, there’s a lot of funds coming this industry’s way.

Personally, I’m most interested in the solar inverter market, which is forecasted to rise 15.45% at a compound annual growth rate, according to Market Research Future.

These shifts in the solar energy industry bode particularly well for Enphase Energy, Inc. (ENPH), which is also TAN’s biggest holding. This fundamentally superior company was founded back in March 2006, but Enphase Energy made a name for itself in June 2008 when it developed the first microinverter system. 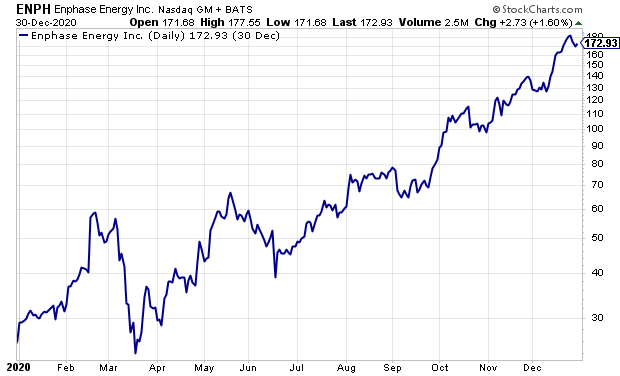 And it tacked on even more gains following its blowout earnings report on Tuesday.

The stock rallied 14% to a new 52-week high of $229.03 yesterday, and I don’t expect its momentum to slow down anytime soon given the incredible growth expected in the sector.

Of course, ENPH isn’t the only stock my Project Mastermind system has found. In fact, just this past Tuesday, I released a Buy Alert for two brand-new recommendations based on my Project Mastermind system’s findings. Both stocks recently reported triple-digit earnings grow for the most-recent quarter and posted double-digit earnings surprises. Even better: Both companies also have triple-digit forecasted earnings growth.

These stocks have trekking nicely higher in recent weeks, but it’s not too late to jump in. Both names are still under my buy limit prices, so now is the time to join Accelerated Profits before these stocks really take off.

To learn more about my Project Mastermind system and my latest buy recommendations – I’ve recommended six in the past three weeks! – click here now.