Several of my pandemic plays trekked higher in recent days as the world greets more good news about COVID-19 vaccines.

Further evidence emerged the vaccine under development by the University of Oxford and AstraZeneca (AZN) can substantially slow virus transmission after one dose.

So far, all of the five vaccines approved for use around the world have been shown they can prevent people from getting sick. What hadn’t been proven is whether vaccines could slow the disease’s spread, particularly by people who show no signs or symptoms of illness.

Preliminary data from the U.K. show Oxford’s vaccine does just that.

In addition, researchers said a single dose was 76% effective against symptomatic COVID-19 from 22 days after the first dose until 90 days later. With both doses received 12 weeks apart, the vaccine was 82.4% effective. It was only 54.9% effective if the doses were given less than six weeks apart.

So far, researchers determined the AstraZeneca/Oxford vaccine worked well against the more transmissible U.K. variant. It was 75% effective against the strain, compared to 84% effective for the older strains.

Some of the drug makers have even begun to test if mixing and matching vaccines could be more effective. Discovering what approach works best has become more urgent as the Centers for Disease Control and Prevention (CDC) said evidence suggests the U.K. strain could be more deadly.

A trial underway in the U.K. will test how a first dose of the Oxford and AstraZeneca vaccine, followed by a second dose of the Pfizer and BioNTech vaccine either four or 12 weeks later.

If it works well, the idea is one could be switched for another, and potentially expand how flexible health authorities can be at getting shots in arms.

In other vaccine news, results last Friday from Novavax’s U.K. trial with 15,000 participants showed its two-shot vaccine was 89% effective in preventing the virus. The vaccine also worked against the more contagious U.K. and South African strains, though it showed 49% efficacy in a separate trial in South Africa.

Of course, other exciting companies are benefitting from the unparalleled need to test, trace and treat COVID-19. A few examples are among the crème de la crème I recommend to my Accelerated Profits subscribers.

Fulgent Genetics started developing a COVID-19 test when the first cases emerged in the U.S. The company’s molecular diagnostic test received emergency use authorization (EUA) from the FDA, and its test is efficient, providing results within 24 to 48 hours. Fulgent Genetics also offers an antibody test that can identify if individuals were previously infected with the virus.

The stock has been on fire this year, rising a stunning 147% as Fulgent Genetics partners with businesses, schools, government agencies and other organizations to provide COVID-19 testing solutions. 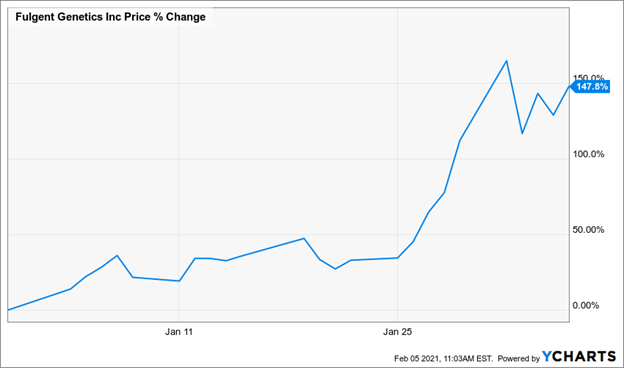 For instance, the company recently extended its partnership with the New York City Department of Education for the remainder of the 2021 school year where the company will continue to provide COVID-19 testing for students and employees in New York City schools.

Its fundamentals are just as hot, too. In Fulgent Genetics’ last earnings announcement in November, the company reported third-quarter revenue surged 880% year-over-year to $101.7 million, smashing analysts’ estimates for $48.46 million by a whopping 110%.

Third-quarter earnings soared an amazing 1,385% year-over-year to $2.08 per share, while analysts were expecting earnings of $0.55 per share, so Fulgent Genetics crushed estimates by an incredible 278.2%!

For the fourth quarter, which is scheduled to be released on March 9, the analyst community is calling for earnings of $4.05 per share on revenue of $199.45 million. Analysts have revised their earnings estimates 94.7% higher over the past 90 days, so another earnings surprise is likely.

The bottom line is that growing companies with strong earnings and sales like Fulgent Genetics are traits super-performing stocks share. And they’re part of the eight key qualities used by my Project Mastermind system to uncover my fundamentally superior stocks.

Like another biotech I found using Project Mastermind that also sells a COVID-19 antibody test in more than 110 countries around the world.

In the third quarter, the company reported its earnings surged 700% year-over-year and beat forecasts by a whopping 220%.

As you can see, my Project Mastermind system has helped me find fundamentally superior stocks that continually post strong earnings results.

In fact, for the fourth-quarter earnings season, 15 of my Accelerated Profits Buy List companies have released results from the latest quarter so far, and all 15 topped analysts’ earnings forecasts.

Even more impressive: Our average earnings surprise is a stunning 46.7% so far. So, the fourth-quarter earnings season is shaping up to be a truly spectacular one for my Project Mastermind and our Accelerated Profits stocks.

Actually, the fourth-quarter earnings season has been impressive for the S&P 500 overall so far. Of the 37% of S&P 500 companies that have released results, 82% have topped analysts’ earnings estimates. And, also according to FactSet, companies are posting earnings results that are 13.6% higher than the average earnings estimate. As a result, FactSet now expects fourth-quarter earnings to only decline 2.3% year-over-year, which compares to previous forecasts for earnings to drop 9.3%.

Looking forward, I expect the stock market’s attention to be diverted to companies that are not just posting positive earnings surprises, but are also providing strong forecasted earnings and sales growth. Essentially, the stock market will grow a bit more narrow, and buying pressure will chase more fundamentally superior stocks, like the ones on our Accelerated Profits Buy List.

Speaking of which, I just added two new stocks in Accelerated Profits on Tuesday. (Sign up now for my latest buy advice.)

So, as the stock market narrows and grows more fundamentally focused, we should see our Buy List stocks climb on higher trading volume.