We do remain in a washing machine market, where what’s up one day is down the next, but it’s also good to see that my fundamentally superior stocks have traded relatively well amid these latest market gyrations, with many defensive stocks meandering higher on Thursday and Friday. While there might be some back-and-filling, I fully expect my stocks to continue to climb higher over the longer term as they post wave-after-wave of positive earnings reports.

According to FactSet, 86% of the S&P 500 companies that have released results so far have topped analysts’ earnings estimates and 82% have beat sales forecasts. The positive earnings surprises are great news, as it signals that many companies’ earnings momentum is improving. In fact, the average earnings decline for the S&P 500 is now expected to be about 4.7%, which favorably compares to previous estimates for a 9.2% decline.

I expect many companies will leap over the low earnings bar that analysts have set, which was exactly the case with the Big Banks. They released their results last week, so let’s take a look at them now.

JPMorgan Chase (JPM), Citigroup (C), Bank of America (BAC) and Wells Fargo & Company (WFC) all reported positive earnings surprises, as you can see in the chart below… 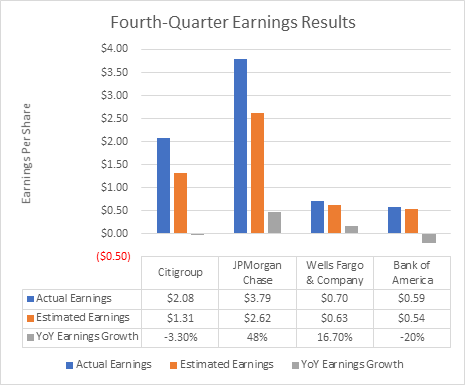 Much of that earnings growth for the big banks was driven by trading on Wall Street and rising markets.

Shares of JPMorgan Chase began rising on January 5, climbing over 13% until the day before it reported earnings. Since then, the stock has fallen over 10% as investors weighed the impact the pandemic economy could have on the company, especially a potential uptick in credit card defaults.

In the fourth quarter, sales at the bank rose 3.4% year-over-year to $30.1 billion. Noninterest revenue increased 13% to $16.8 billion, with higher investment banking fees and higher net production revenue in home lending contributing to the growth. The company earned $12.1 billion in profits for the quarter, its best ever.

However, CEO Jamie Dimon said the company’s $30 billion in reserves reflects its cautious stance amidst the ongoing economic uncertainty caused by the pandemic.

Bank of America Corp.’s 20% earnings decrease from a year prior was the poorest fourth-quarter result among the biggest banks to date. Revenue of $20.1 billion was down 9.9% from a year ago, and it missed FactSet analysts’ expectations for $20.58 billion by 2.3%. Loans were down 2% to $305 billion, while deposits increased 23% to $885 billion.

Well prior to earnings, my Portfolio Grader flagged the slowing growth, bringing the ratings of these big bank stocks down to either a Sell or, in the case of Citigroup, a “Strong Sell.” As you can see below, when you add it all up the overall Total Portfolio Grade earns a D-rating. If you want to have a successful portfolio, these stocks should not be on your buy list. 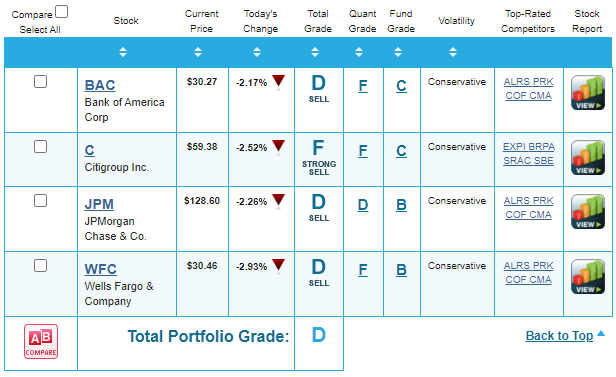 And they’re a good illustration of why increasing earnings and sales growth, as well as positive fourth-quarter guidance, will be critical for a company’s success in this third-quarter earnings season.

I don’t own financial stocks and banks like this, and all I can tell you is a relatively flat Treasury yield curve like the one we’re in now is not good for financials and banks. In addition, banks are considered value stocks, not growth stocks. As a growth stock investor, banks simply don’t interest me.

This is why I don’t really care that these stocks have seen some earnings growth in the fourth quarter.

I do care, however, when earnings announcements for my fundamentally superior stocks, with outstanding earnings and revenue growth. And I’m expecting that the stocks across my Buy Lists will respond positively. In fact, I’m already beginning to see this. For example, in my Accelerated Profits service, out of the six stocks that have reported their earnings results so far, all have bested analysts’ estimates. Earnings season will really heat up for my Accelerated Profits stocks next week, with 10 of my companies reporting.

I look for earnings reports to dropkick and drive my stocks higher, making now the perfect time to jump in before their results are released.

The reality is I choose only the crème de la crème, but my decisions are based on math and the latest technology.

It’s all part of a project I’ve been working on for years that I recently shared with the world called Project Mastermind. After extensive analysis, I isolated the eight key qualities that super-performing stocks shared… and I developed a system for riding them.

This past Tuesday, I released a brand-new Buy Alert for two companies thanks to Project Mastermind. Both companies are well-positioned to post stunning earnings results in their coming earnings reports (one of which that released its quarterly report on Thursday, and posted a posted a 70.5% earnings beat).

I will be releasing another Buy Alert next Tuesday that has seen explosive earnings surprises in the past two quarters. You don’t want you to miss out before these stocks really take off, so make sure to sign up here to get my buy advice.

You can also click here to watch my Project Mastermind event, where I gave everyone a glimpse at my system and revealed my number-one stock pick, which posted a 76.9% earnings surprise in its most-recent quarter. You’re not going to want to miss out.