The news spread everywhere by Monday — GameStop Corp. (GME) was the most traded stock on financial manager Fidelity’s trading platform.

Everyday traders have been piling into the stock, while Wall Street insiders with massive short positions that assumed it would fall have been getting clobbered. 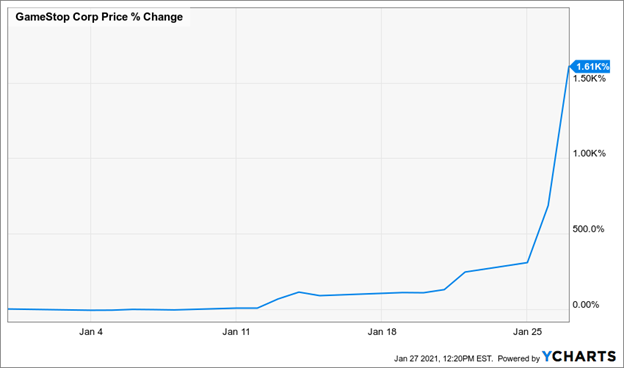 Prior to GameStop’s recent rise, the stock had been on a downward trajectory for years as video gamers began to shift tastes to online, downloaded games. Wall Street traders were mostly short sellers, meaning they were expecting the stock to continue to plummet.

GameStop’s surge is a fascinating example of a “short squeeze.” Simply put, when traders “short” a stock, they borrow shares of the stock they think will fall over a given timeframe. If the stock drops, they give back the shares and collect the difference between the initial borrowed price and the actual sale price.

But if the borrowed shares unexpectedly increase in price, the trader now has to buy back the shares at that higher price. The closer the time gets to the expiration of the short trade, the more the trader stands to lose.

Often, short traders start to close their positions immediately to limit losses, meaning they start buying shares in the company. However, a sudden surge of rapid buying from short sellers ends up increasing the price of the shares in what’s known as a “short squeeze.”

Then other contrarian investors, including Michael Burry, who was portrayed in the 2015 film The Big Short for his role in predicting and profiting from the subprime mortgage crisis, began to take long positions in GameStop.

Another industry report warned shares in GameStop were dangerously short. At one point, according to CNBC, more than 138% of the company’s tradable shares had been borrowed and sold short. This made the stock the most shorted on the U.S. stock market, according to FactSet.

Then Chewy (CHWY) co-founder and former CEO Ryan Cohen said he was joining GameStop’s board on Jan. 11, and the stock soared, which started a wave of short covering since.

So is now the time to jump in? Not now. The reality is the stock is too volatile, and it doesn’t pass my fundamental screens.

Yes, in my Portfolio Grader the stock does receive an A-rating for its Quantitative Grade, which represents the strong buying pressure the stock has been under. However, its fundamentals are quite poor. It holds an F-rating for Sales Growth, Earnings Momentum and Return on Equity, and a D-rating for Fundamentals and Analyst Earnings Revisions. Overall, its Fundamental Grade is a “D.”

In other words, the stock is a mixed bag and likely a bubble waiting to be pricked. Short covering should never be confused with real strength, which is why I recommend that GameStop and other short squeezes be avoided.

The bottom line is that I look for stocks with superior fundamentals lining up across the board. These are the stocks with strong earnings and sales growth.

And I choose them based on math and the latest technology.

It’s all part of a project I’ve been working on for years that I recently shared with the world called Project Mastermind. After extensive analysis, I isolated the eight key qualities that super-performing stocks shared… and I developed a system for riding them.

Using modern technology and loads of data, I am able to identify which stocks are poised to skyrocket — in a matter of months, not years! And these have nothing to do with highly volatile short squeezes.

Take one financial tech company I recommended based on Project Mastermind back on June 23, 2020 to my Accelerated Profits subscribers. The stock has soared over 137% since Dec. 31, 2020. The overall Accelerated Profits Buy List of 57 stocks is up an average 16% over the same timeframe, while the S&P 500 gained just 0.9%.

This company offers its in-demand services to clients in the U.S. and abroad. During the latest quarter, it saw paying clients increase 136.5%, year-over-year. Revenue surged 272.1% from the year prior, while adjusted earnings grew 150%, year-over-year. The stock has been on a tear this past month, rising over 180%.

If you missed that recommendation, the good news is just yesterday I released a brand-new Buy Alert for two companies thanks to Project Mastermind. Both companies are well-positioned to post stunning earnings results in their coming earnings reports (one of which will be releasing its quarterly numbers tomorrow morning). I look for these earnings reports to dropkick these stocks and drive them higher, so now is the time to get in before they start firing on all cylinders.

I don’t want you to miss out once these stocks really take off, so make sure to sign up here to get my buy advice.

You can click here to watch my Project Mastermind event, where I gave everyone a glimpse at my system and revealed my number-one stock pick. You’re not going to want to miss out. Because of the livestock pick that’s in there, we can only make it available for a little while longer. Go here to get started.