If you’ve ever watched sports, you’ve undoubtedly seen reports or interviews with players – both the winners and losers.

When a team wins, they attribute their success to their efforts as individuals and as a team. You’ll hear all about how special the group is and how individuals worked harder than anyone else and were destined for success.

If, on the other hand, a team fails, it’s often the fault of… the officials.

We see this type of thinking a lot in investing. We also have a tendency to congratulate ourselves for our brilliance when we succeed – but blame outside influences for our failures.

In my office, we refer to this as “confusing a bull market for brains.” A potentially fatal side effect of this all-too-human trait is what happens when we get good results from bad decisions: We do the same thing again, usually to a bad outcome. Not only do we lose money; we lose the time we might have spent making improvements in our portfolio.

This tendency to attribute success to our efforts and abilities – and failure to outside circumstances – is known as Self-Attribution Bias.

In today’s essay, we’ll talk about the challenge of Self-Attribution Bias, how it works, and how you can neutralize its negative effects.

Why Stocks Rise and Fall

“In the short term, the market is a popularity contest; in the long term it is a weighing machine.”

That’s a quote from one of the greatest investors of all time, Warren Buffett.

His method of investing focuses on choosing stocks solely based on their overall potential as a company; he looks at each as a whole and holds them as a long-term play.

He’s not chasing capital gain but seeks to own quality companies that can generate earnings.

I share Buffett’s dedication to fundamentals. In fact, fundamentals are one of two critical characteristics at the center of my stock analysis.

By fundamentals, I mean sales growth, earnings growth and the like. Growing companies are ones that are healthy and thriving. They have smart leaders who know how to run and manage a smart business.

If a company is struggling to sell its products or is spending more than it makes, it’s not a company that you want to own for growth.

The second characteristic I look for in any great stock is strong buying pressure. Think of this as “following the money.” The more money that floods into a stock, the more momentum a stock has to rise. And there’s no doubt about it, we all like stocks that rise!

I call this my Quantitative Grade.

These two factors, more than any others, determine whether a stock will rise or fall. And the great thing is that my system can spot laggards that are about to become winners.

Spotting a King of the Ring

Let’s look at World Wrestling Entertainment (WWE) as an example.

WWE stock was flat for 15 years. Most folks probably dismissed it. But Project Mastermind is a computer system. It doesn’t have biases. It just looks at the numbers. Sure enough, if you’d had Project Mastermind in your corner in late 2017, you’d have known something almost no one else did. The stock was about to break out.

Below you see a chart from when I recommended buying the stock in December 2017 through today. The stock had achieved a top score of “A” for its Quantitative Grade, and as expected, the flood of major institutional cash kept shares moving higher and higher. 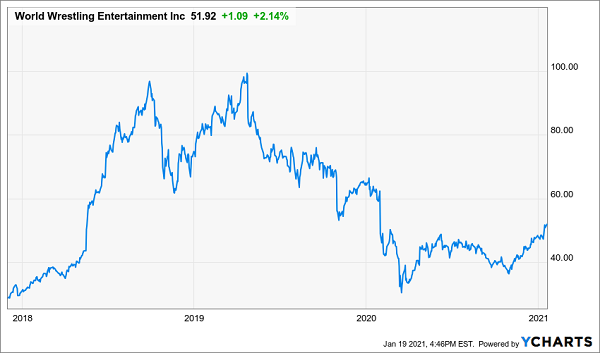 However, on May 14, 2019, I told my subscribers it was time to lock in our profits. But why did I recommend selling it? Well, in the first quarter of 2019, WWE revealed slowing earnings and sales momentum. WWE reported total first-quarter revenue of $182.4 million, down from $187.7 million in the same quarter a year ago. Analysts were expecting revenue of $198.99 million, so WWE posted an 8.3% sales miss.

Due to the earnings and sales misses, the analyst community had aggressively lowered their earnings estimates for the second quarter, third quarter and full-year 2019.

Project Mastermind uses these data points to signal when it’s time to get out. If you bought WWE at the time of my original recommendation, and sold when I recommended, you achieved a 150% gain, including dividends.

It can be difficult to let this kind of stock go. A pick going up 150% makes you feel awfully smart.

But we didn’t let our biases control us. We used cold, hard facts to tell us when it was time to get out. And as you saw, the stock didn’t do much after we sold. So, it was nice to have that capital freed up. Now we’re deploying this system for even better gains in less time with my Project Mastermind.

On Tuesday, I hosted a special event where I unveiled my latest research from Project Mastermind and revealed the stock I rated number-one based on insights from Project Mastermind – ticker symbol and all. I’m really excited about the project, and I made sure to record the kickoff for you to review, if you couldn’t make it. Click here to watch now.

P.S. Besides the stock you’ll hear about in my presentation… My Project Mastermind research system just uncovered another explosive stock that could hand you 100% gains in no time.

And I’ll be adding it to my recommendation list next Tuesday.