The cybersecurity industry has been all over the headlines this past month – and not in a good way.

It started on December 8 with FireEye, Inc. (FEYE). If you don’t know, FireEye is considered one of the best cybersecurity companies in the country. It offers a wide variety of cybersecurity services, including consulting, network security, email security and threat intelligence.

The company was climbing nicely higher following its strong third-quarter earnings results in late October. FireEye unveiled record revenue and earnings. For the third quarter, the company posted earnings of $0.11 per share on revenue of $238 million. Analysts were expecting earnings of $0.07 on $227.7 million in revenue, so FEYE posted a 53.6% earnings surprise and 4.7% sales surprise. It also represented a whopping 450% year-over-year earnings growth and 5% year-over-year sales growth.

However, FEYE’s uptrend came grinding to a halt on December 8 after company management announced that FEYE had been hacked by foreign actors and their Red Team tools stolen.

This is a big deal. According to FireEye CEO Kevin Mandia, “These tools mimic the behavior of many cyber threat actors and enable FireEye to provide essential diagnostic security services to our customers.” He also noted that “the attacker primarily sought information related to certain government customers.”

The stock plummeted more than 13% the following day. While the stock has since regained its losses, I still wouldn’t recommend buying it right now, simply based on its fundamentals. FEYE currently earns a C-rating in Portfolio Grader, making the stock a “Hold.” 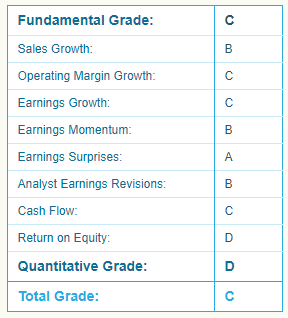 Aside from mediocre earnings and operating margin growth, what really stands out to me is the company’s C-rating for its Quantitative Grade. My exclusive quantitative formula measures the institutional buying pressure supporting a stock and then determines the quantitative grade.

Clearly, that’s not the case with FEYE right now.

But it’s not just FEYE that’s had a hacking problem recently. A wide range of U.S. government agencies were attacked, too, including the Treasury Department, Commerce Department, Department of State, Department of Energy, the Cybersecurity and Infrastructure Agency, the National Nuclear Security Administration, Department of Homeland Security, three U.S. states and the City of Austin.

This was due to a breach in SolarWinds Corporation (SWI), which provides IT software management software to more than 425 of the Fortune 500 companies, the top ten U.S. telecommunications companies, the U.S. military, U.S. departments, the top five U.S. accounting firms and universities and colleges. Its Orion Platform, a network monitoring and management software, was hacked via a Trojan horse. This created a “backdoor” for hackers to enter and control the software. Interestingly, it was a FEYE employee who first spotted the SolarWinds hack.

This is a very serious issue, but make no mistake, I believe the need for cybersecurity will only grow in years to come.

The reality is there’s a lot of opportunity here for investors. In 2019, the cybersecurity industry was worth $161.07 billion. In five years, that’s expected to nearly triple to $363.05 billion, according to Mordor Intelligence. So, there’s a lot of growth ahead. It’s just a matter of investing in the right cybersecurity company with superior fundamentals to back it up.

The good news is that I have two for you in Growth Investor. The first is Fortinet, Inc. (FTNT). The company provides unified security solutions that can be deployed over digital networks to protect users against malware, spam and network intrusions. The company provides its security solutions to data centers, enterprises, carriers and distributed offices around the globe. Fortinet currently boasts a portfolio of over 530 patents worldwide.

Since its founding back in November 2000, the company has had a meteoric rise. Over the past 18 years, it has shipped more than four million units of its security solutions. It has built up a base of over 360,000 customers. And since 2002, its revenues have surged from just $2 million to nearly $2.5 billion.

Given FTNT’s solid fundamentals and positive future guidance, I look for this high-quality stock to only head higher from current prices.

FTNT also carries a B-rating in Portfolio Grader, making it a “Buy.” 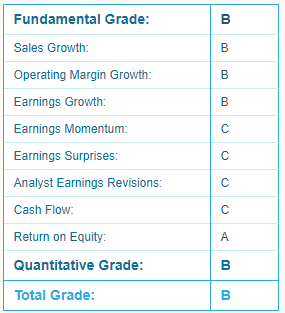 As you can see in the Report Card above, unlike FEYE, FTNT receives a B-rating for its Fundamental Grade, Quantitative Grade and Total Grade. Not only are its fundamentals better, but clearly there’s still a lot of institutional buying pressure to continue driving the stock higher.

The second is a cybersecurity company that I just recommended in my Growth Investor January Monthly Issue last Friday. It recently posted a strong third-quarter earnings report, and walloped analysts’ expectations by more than 18,000%! Looking ahead to the fourth quarter, company management continues to see strong growth ahead. Click here for the name and latest buy advice.

The bottom line: There’s a lot happening in the cybersecurity industry right now, and I look for specific, high-quality stocks to continue to do well as the magnitude of the importance of cybersecurity becomes front and center. If you’re interested in profiting in this growing space, join me here at Growth Investor today.

Note: There’s a great divide that’s opening up in America. On one side is a new aristocracy that’s amassing more wealth, more quickly than any other group in American history. For people like me, the one percent, life has never been better, more prosperous.

The thing is, what’s happening is only going to gather in strength over the coming decades. It certainly won’t weaken.

That’s why I put together this video. In it, I’ll lay out exactly what is happening, including several key steps every American should take right now.