Santa Claus is coming to town, and while the mood turned a bit sour on Monday, I look for the holiday cheer that typically spreads across Main Street to perk Wall Street right back up.

So what stocks should you stuffing in your stocking before the Christmas holiday?

Personally, I like companies in the booming online and mobile gaming business, which has been surging during the pandemic and into the holiday season.

The global mobile gaming market alone reached $75.4 billion so far this year, up 19.5% from 2019, according to Sensor Tower. Five games achieved $1 billion in revenue in 2020, including PUBG Mobile, Honor of Kings, Pokemon Go, Coin Master and Roblox. Some of these games were around last year but saw sales surges in 2020. An example is PUBG Mobile, which brought in $2.6 billion in sales this year, up 64.3% from 2019’s sales figures.

Industry analysts have noted they don’t expect 2020’s uptick in games sales will dwindle next year, either. For instance, in China, one of the world’s largest mobile gaming nations, and where COVID-19 infections and lockdowns are mostly a thing of the past, elevated interest in gaming has persisted.

With that in mind, a great gaming “stocking stuffer” is Logitech International SA (LOGI).

Back in October, LOGI shares surged after the company smashed analysts’ expectations for its second quarter in fiscal year 2021 and upped its full-year guidance.

The outstanding quarter can be attributed to four major trends the company sees working in its favor: working and learning from home, video everywhere, electronic sports driving gaming engagement and participation and the further democratization of content creation.

Sales of PC Webcams climbed 258% from a year prior to $102 million, the first time the company saw sales of the device top $100 million in a quarter, while video collaboration sales rose 161% to $237 million — Logitech’s best ever quarter for the metric. Gaming sales also rose 84% from a year prior as the company’s racing simulation game took off.

Logitech stated, “Our products are essential to helping customers work, play and create wherever they are. Logitech is well positioned for long-term growth.”

As a result, Logitech increased its full-year 2021 outlook. The company now expects to achieve sales growth between 35% and 40%, up from its previous forecasts for 10% to 13% annual sales growth. Full-year earnings are forecast to be between $700 million and $725 million, compared to previous estimates for $410 million to $425 million.

The company also earns the rare AAA-rating in my Portfolio Grader, as it holds an A-rating for its Fundamental Grade, Quantitative Grade and Total Grade. 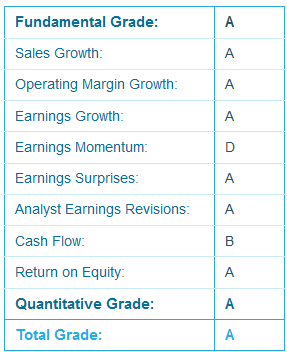 I added the stock to the Growth Investor Buy List back in August, it’s already up about 31%. I also listed it as one of my Top 5 stocks in Growth Investor.

Aside from being a strong play on the gaming industry, LOGI is also a good example of the type of stock investors will rotate to in 2021 as Wall Street turns its focus more on superior fundamentals.

If you’re interested in the other stocks I expect do well next year, I recommend giving my latest Growth Investor January Monthly Issue a read. In this Monthly Issue, I discuss how I expect the investment landscape to change and where to find the best opportunities. I also unveil my newest buy in the cybersecurity space. You can get the name and my buy advice here.

In the meantime, I hope you have a wonderful holiday weekend! Remember, the stock market will close early on Thursday, December 24, and will be closed on Friday, December 25, in observance of the Christmas holiday.

Note: There’s a great divide that’s opening up in America. On one side is a new aristocracy that’s amassing more wealth, more quickly than any other group in American history. For people like me, the one percent, life has never been better, more prosperous.

The thing is, what’s happening is only going to gather in strength over the coming decades. It certainly won’t weaken.

That’s why I put together this video. In it, I’ll lay out exactly what is happening, including several key steps every American should take right now.