Last Thursday, I sat down with my InvestorPlace colleague, the stock trading legend, Eric Fry, at his Technochasm Summit.

I’m a big believer in his research. So, let me first explain what Eric means by the Technochasm.

The world is going through a process of computerization, automation and mass technological adoption. With every passing day, it seems like technology companies are taking over more and more of the American economy, and quickly scaling to $100 billion companies and beyond.

Apple (AAPL) has taken over our phones, Amazon (AMZN) is dominating online retail, Uber has virtually replaced the old cab companies, and Google (GOOG) has massive market share in the online search industry. Everywhere you look, in sector after sector, tech companies are grabbing market share, and generating rivers of cash flow. And the shareholders backing these tech giants have reaped the rewards.

Meanwhile, these new businesses and technologies are wreaking havoc on the established infrastructure. And it’s ripping the stock market in two. It certainly explains why tech stocks have rebounded to new highs after COVID-19 first began spreading around the globe.

Technology keeps advancing, while both creating and destroying businesses at an incredible rate. The Technochasm explains how technology is creating a wealth gap between the 1% and the other 99% in America. On one side of that divide are certain tech companies that are growing faster than ever before. On the other side are the companies going bankrupt in the blink of an eye.

One of the determining factors creating this divide, and separating winners from losers, is something called exponential progress. It’s a factor that impacts innovation and speeds the rate of adoption of new technologies.

Back in 1980, the average time a major company spent on the S&P 500 was 35 years. Today, a successful multibillion-dollar company can expect to remain the index for about 20 years or less — about half the length of time it was a few decades ago. 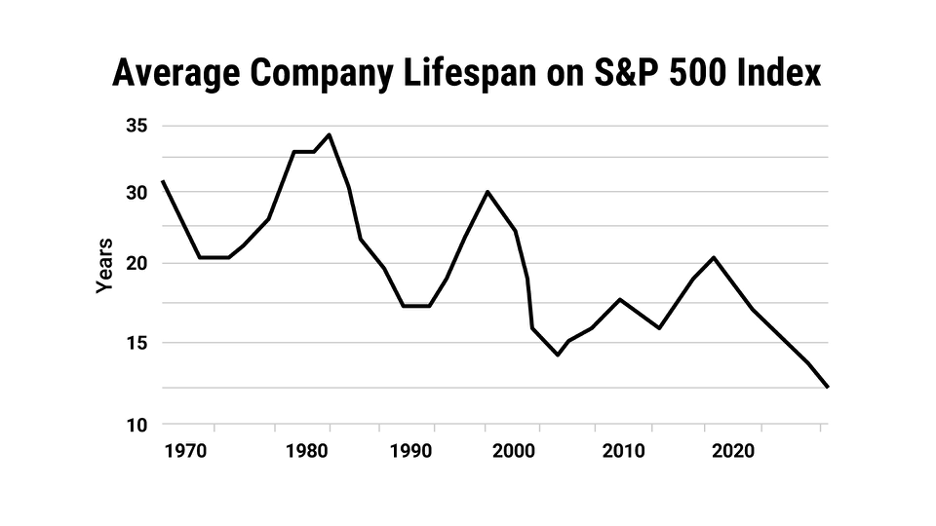 Ten years from now, about half of today’s Fortune 500 companies will be gone and replaced by startups we haven’t heard of yet.

Technological shifts are the main reason for this growing trend.

Interestingly, it used to take Fortune 500 companies 20 years to grow into a $1 billion market value. Now it can take just a couple of years. Google hit $1 billion in eight years. Uber Technologies (UBER) and Snap Inc. (SNAP) did it in under three years.

At the same time, companies that were once household names are getting disrupted by tech upstarts and seeing their stock prices plummet 50% and higher. Case in point: Macy’s (M). In 2015, Macy’s was one of the largest, most admired retailers in the world. By 2020, the stock has plunged 90%. Over the last several years, The Gap (GPS), once an admired retailer, has closed nearly half its stores.

While brick-and-mortar stores have been struggling to get by, more than 200,000 people make $100,000 or more per year selling on Amazon. More than 23,000 people are earning $1 million or more in annual sales on Amazon’s e-commerce platform.

The Importance of Superior Fundamentals

For the past four decades, I’ve had a front-row seat to the acceleration and adoption of technology. I’ve seen how a small company can come out of nowhere and totally disrupt an entire industry, destroying competitors in their wake.

Understanding the power of new technology and exponential progress is how I gained an edge over Wall Street and amassed a personal fortune. Back in college in 1978, I got early access to Wells Fargo’s powerful mainframe computer to see if I could use it to create a model that would beat the performance of the S&P 500. Running advanced mathematical models in second and quickly scanning the data, I ended up crushing the S&P 500 by a factor of more than 3-to-1.

Along the way, I helped pioneer the field of quantitative analysis that’s all the rage on Wall Street today.

I’ve witnessed firsthand how computers have forever changed the finance industry and the world at large. I was able to use the power of computers to run my proprietary quant algorithms and quickly uncover stocks about to break out to new highs.

You see, my trading systems are designed to uncover stocks with superior fundamentals. I use eight fundamental factors when I consider recommending any stock, regardless of the sector it’s in. A couple of examples of these fundamental factors include earnings growth, increasing sales, positive earnings surprises and free cash flow.

Over the last few years, I’ve noticed a trend among my top-performing recommendations. And it confirms Eric’s Technochasm thesis.  You guessed it — tech stocks are among the crème de la crème.

Back in the day, my proprietary trading code uncovered Oracle Corp. (ORCL) when it was trading for just $6 per share… well before it became one of the leading and most valuable software corporations in America and traded north of $50.

That’s just one example of what my proprietary algorithms spotted. It was, in a way, the Technochasm. All I had to do was recognize a good thing when I saw it.

That’s also how I uncovered other huge winners, too, like Apple Inc. and Intel Corp. (INTC), before they became big household names.

How to Maximize Your Technochasm Potential

Hypergrowth trends like driverless cars, artificial intelligence, 5G, blockchain technology, and the Internet of Things are all coming of age at the same time and poised to generate trillions in new wealth.

I’m talking about $22 trillion in the financial service industry. 5G is set to create $12 trillion in new wealth over the next few years. Artificial intelligence is on pace to unlock over $15 trillion in new revenue. The Internet of Things will unlock $19 trillion. And driverless cars are predicted to add $7 trillion.

And investors who get in early on these trends are about to make the gap between the 1% and the 99% even wider.

Eric and I have spotted what’s coming, and a way for folks to get on the right side of the Technochasm. We lay it all out for you in our Technochasm Summit, which you can view here.

Bottom line: We’ll show you clearly what’s at stake for the future of stock investing. And we’ll recommend a way to make well over $100,000 in the next 12 months from a niche group of stocks. You’ll also get a free recommendation with 10X potential.