(If you haven’t signed up for the event yet – later today, at 7 p.m. Eastern – you’ve got one last chance to do so, by clicking here.)

But before we get to the big event, I want to explain why the big money is in the small-cap tech stocks.

On Tuesday, I showed you how my background in investing and helping people make money connects with the Technochasm – the huge and growing gap between tech stocks and… well… everything else in the market.

As I discussed, back in the late 1970s, my professors at Cal State Hayward gave me unprecedented access to Wells Fargo’s big, expensive, and powerful mainframe computers to help me build my stock-selection models. That right there was a Technochasm between myself and my fellow students.

Then, through hundreds of hours of research, and thanks to that mainframe computer, I discovered how an elite type of stockconsistently outperformed the broad market, year in and year out. Through extensive analysis, I isolated the eight key qualities that these super-performing stocks shared… and developed a system for riding them.

The research I did back then serves as the foundation of what is now my advanced, high-tech method of computerized market analysis.

Today, then, I’d like to show you how my system works in practice and delivers my readers triple-digit gains time and time again.

To do so, first off, I have to tell you how especially galling I find it how Wall Street has taken some of the most popular passive indices and is now routinely “fleecing” investors during market hours, as investors have been mistakenly told that simply index investing is the best way to make money.

This couldn’t be more wrong, and I’ve been fighting this battle my entire investing life…

Know a Good Thing When You See It

Way back when I was in grad school at Cal State Hayward, we were taught that we should all invest in indexes, as the stock market was supposed to be efficient and impossible to beat. However, while working on a college project, I discovered that this couldn’t be further from the truth.

With that mainframe and a bunch of number crunching, it became clear to me that indexing was not efficient.

I didn’t want other investors to fall into the same trap, which is why I began publishing my newsletters.

The reality is that we’re in a stock picker’s right now, and while you can certainly invest in indexes, the real money will be made in individual stocks.

Let me show you how I find those stocks…

Back in the day, my proprietary trading code uncovered Oracle Corp. (ORCL) when it was trading for just $6 per share… well before it became one of the leading and most valuable software corporations in America and traded north of $50.

That’s just one example. But it wasn’t really me who first spotted ORCL; it was my proprietary algorithms. It was, in a way, the Technochasm. All I had to do was know a good thing when I saw it.

That’s also how I uncovered other huge winners, too, like Apple Inc. (AAPL) and Intel Corp. (INTC), before they became big household names.

In fact, the tech world these days feels very much like it did when I bought Intel in the 1980s.

Remember, I used mainframe computers to create my trading algorithms in college. Mainframes were massive and by today’s standards slow and rudimentary.

It was a tiny device – the silicon microchip – that barely anyone had heard of when IBM started putting them into the first PCs. But Intel’s chips were far and away the best.

Today, you’ll still find “Intel inside” just about every PC in the world. And its stock price has gone up 11,875%! 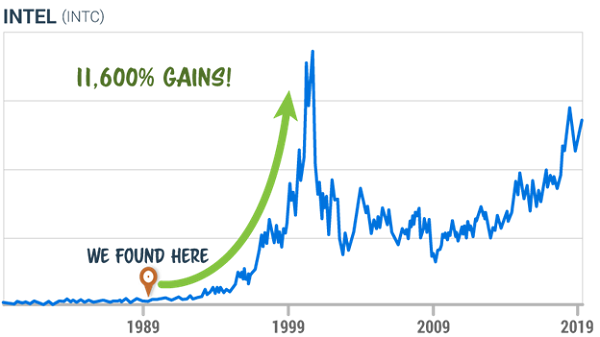 The same pattern played out with NVIDIA Corp. (NVDA) in recent years. The company makes graphic processing units (GPUs) for consumers and businesses – more of them every day – though time will tell if it’ll run as high as Intel.

All I know is that, thanks to my Technochasm-driven method of supercharged gains, I recommended this stock to my subscribers back in 2016. Then in 2019, we sold it for a whopping 166% gain!

But now I think we can do even better by accomplishing that more quickly.

Small Caps Carry You Across the Technochasm

Back in September 2018, in one of my services, I recommended a little-known company called AudioCodes Ltd. (AUDC).

The firm focuses on Voice over IP (VOIP) and data networking products, applications, and services. For the past 25 years, AudioCodes has helped companies build and operate voice networks that unify communications, contact centers, and business services.

In the time since I’ve recommended AUDC, the stock is up 147%! In comparison, its small-cap peers in the iShares Russell 2000 ETF (IWM) have barely broken even in the same time period!

I expect it to continue to climb higher as buying pressure increases.

Of course, there are many other stocks on my Buy Lists that have outperformed the market and should continue to do so in 2021.

Vipshop Holdings Ltd. (VIPS) is another great example. I alerted my readers to it back in July 2014. VIPS isn’t so small anymore, at a $15 billion market cap today. But that summer, it looked ideal for my strategy.

You can see in the chart below why I was glad I followed that signal to buy VIPS:

I mention all this because you have just this kind of opportunity… starting this evening.

You see, Eric and I have similar plays up our sleeves now.

He’ll be revealing one recommendation for free at tonight’s event.

And we’ll show you how to get more of our recommendations at The Technochasm Summit as well.

This is an event that requires an RSVP. To save your spot, just click here.