Nowadays, you hear a lot about “quants.” Plenty of “quant” firms have popped up on Wall Street over the years.

I’m proud to say that I’ve been using these methods for decades, and I’m one of the few that’s been able to use these strategies for long-term success, earning me the nickname “The King of the Quants” in Forbes.

The key is that a proven system helps you “stick to your guns” and avoid bubble stocks. In this coronavirus sell-off, the bubbles that are being pricked right now include electric vehicle companies, such as Tesla (TSLA).

TSLA was on fire this year, surging 500% from December 31 to September 1. Investors were particularly excited after TSLA posted its fourth profitable quarter in a row, which made it eligible for the S&P 500.

However, a little air came out of Tesla’s bubble after it announced a secondary stock offering and analysts slashed earnings estimates by 80%. The bubble was pricked again after the company was passed over by the S&P 500 in early September. TSLA shares tumbled more than 20%.

The reality is there was a lot happening underneath Tesla’s hood. The company’s vehicle July sales were poor in the hottest electric vehicle (EV) market, namely Europe, so the analyst community slashed their third-quarter consensus earnings estimates to $0.56 per share, down from $2.76. In addition, Tesla’s largest institutional investor, Baillie Gifford, cut its stake in the company to less than 5%.

Not even Elon Musk’s hyped up “Battery Day” on September 22 could breathe a little life back into the stock. During the event, Elon Musk announced plans to build and source in-house “tabless” batteries to extend the cars’ range and power. He also promised a Model S Plaid Tesla, with a battery that’s expected to last 520 miles between charges. The car has a $139,990 price tag and won’t be available until next year.

Tesla also is working on a $25,000 car that Elon Musk believes will be doable as the company cuts its battery cell and packs costs. However, he made the same claim for a $25,000 Tesla in 2018. The stock fell more than 8% following the event.

Now, my Breakthrough Stocks do not trade at bubble valuations, and tend to benefit from the rotation out of some of the frothy stocks.

Case in point: Digital Turbine, Inc. (APPS), which is a nice feather in our cap at Breakthrough Stocks.

As you can see in the chart below, its trading action over the year is actually quite similar to Tesla’s. However, there’s one key difference: It has the fundamentals to back up the stock’s climb higher and keep it moving higher over the longer term. 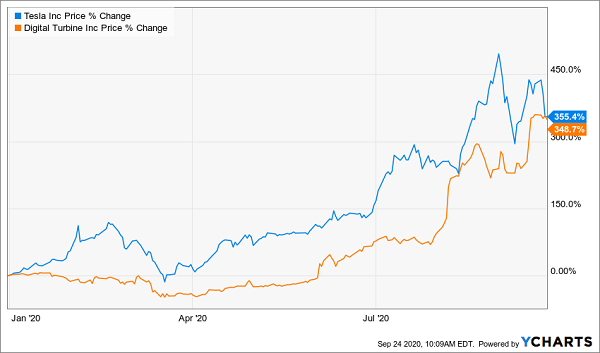 Using my Portfolio Grader, one of the things you’ll see with a stock like APPS – and won’t see with TSLA – is a history of strong earnings. While TSLA got a “C” there, APPS got an “A.”

My “Moneyball” system separates the wheat from the chaff, and earnings, in particular, are the bedrock statistic for this system.

That’s the subject of my Moneyball Multiplier Challenge next Wednesday, Sept. 30 at 4 p.m. ET. Be sure to RSVP for the free online event simply by clicking here.

Some of the best in this regard are small-cap stocks like APPS that we discussed earlier. A couple of years ago, IntriCon Corp (IIN), a company that manufactures wearable medical devices, made a particularly big long-term move.

In September 2017, the “Moneyball” signal triggered when the stock was trading just under $9 a share. But look what happened next: 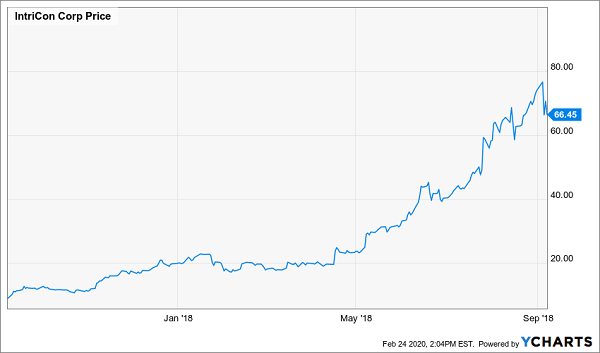 IntriCon’s share price soared all the way up to $65 over the next 11 months. Meaning anyone who followed my recommendation would be sitting on a 615% open gain in less than a year! A $10,000 investment would yield $61,500 in profits from just one trade.

Similarly, after Hansen Natural, now Monster Beverage (MNST), triggered my “Moneyball” signal, shares went from $3.96 to $40 before we sold.

This is the single best variable I know for such powerful stock gains.

Tomorrow, I’ll discuss how I disproved the Efficient Market Hypothesis, and how much better your performance can be with a stock-picking system like mine.  And then on Wednesday, Sept. 30 at 4 p.m. ET, I will be putting everything together, so you can see exactly how my “Moneyball” system works – and how I can make it work for you, too.

Which is why you should mark your calendars… and try to make it to my Moneyball Multiplier Challenge. Simply click here to submit your RSVP for Wednesday’s live online event.