If you’ve ever had an MRI scan before, you know how horrible the experience can be.

The reason you’re getting the scan in the first place is scary enough as it is, so you’re already nervous before you even enter the room. Then you’re put in a coffin-sized tube as technicians tell you to lie still for the next hour or so. And while you lie quietly, the MRI machine is as loud as can be, which makes the experience even worse.

Thankfully, that dreadful hour or so spent in the MRI machine could become a relic of the past, with some help of one of the world’s most promising technologies in existence right now.

That would not only make the whole experience much more pleasant, it’d put results in the hands of doctors faster, allowing them to make diagnoses quicker, too.

The research project, dubbed fastMRI, trained what’s called a machine learning model (the AI) on large data sets consisting of pairs of low-resolution and high-resolution MRI scans. The model was then able to anticipate what final MRI scans look like by using only a quarter of the typical input data.

Then the researchers asked radiologists to make diagnoses using both traditional MRI scans and AI-enhanced scans of patients’ knees. The results were indistinguishable.

While the technique is still likely years away from commercialization, it does show us yet another example of how major industries— in this case, the $2.5 trillion healthcare sector — will be transformed by AI.

AI is also upgrading the auto industry and the complex web of sensors at work in self-driving cars. Its algorithms are being deployed in agriculture, manufacturing, finance, you name it.

In an effort to maintain the United States’ competitive edge on the global stage, the White House has proposed to ramp up its spending on artificial intelligence by about 33% over 2020’s fiscal budget allotment to $1.5 billion for fiscal 2021.

China is taking a step further, as it wants to be the world leader in AI by 2030. It’s estimated the country spends tens of billions to advance AI research.

Some of the world’s most-well known tech companies have begun making massive early investments in this new tech as well. Intel (INTC) has put in $776 million; Uber (UBER), $680 million; Twitter (TWTR), $629 million; Facebook (FB), $60 million. The list goes on and on.

However, if you were looking to invest in AI through INTC, UBER, TWTR or FB, you might want to reconsider. If you start plugging these names into my Portfolio Grader, you’ll see the results are quite mixed: 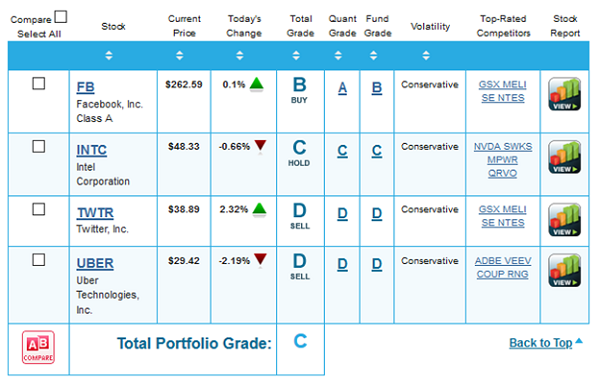 Actually, the fundamentals scores above look mediocre to worse. Intel gets a “C” for its Fundamental Grade, while Twitter and Uber get a “D”! And while I wouldn’t bet against Facebook or Intel, I have found a better AI buy.

I like to see an “A” for the Quantitative grade – that reflects institutional buying pressure on Wall Street – and an “A” for the company’s Sales Growth, Earnings Growth, and other key fundamental factors. That’s just the case now for the stock I’ve nicknamed The A.I. Master Key.

This company actually provides the technology for other major tech companies, like Microsoft (MSFT) and Google (GOOG).

Not only does the company make the “brain” that all A.I. software needs to function, but it dominates its corner of the market in doing so.

So, it’s no surprise that for its most-recent quarter, this company reported record revenue results and beat the analyst community’s expectations on the top and bottom lines.

If you sign up for Growth Investor now, I’ll tell you everything you need to know about this stock and the AI industry in my special report The A.I. Master Key. This report is yours – absolutely free.

The stock is currently sitting pretty with an over 190% return on my Growth Investor Buy List, so you’ll want to sign up now, as I expect the shares to continue trekking higher from here.

Click here for a free briefing on this A.I. innovation.