The second-quarter earnings announcement season may be winding down, but not before the largest big-box stores – Walmart (WMT) and The Home Depot, Inc. (HD) – had had their say. And, for this quarter, their results said quite a lot.

Comparable same-store sales climbed 9.3%, topping estimates for a 5.3% rise. However, the big number was the e-commerce net sales growth, which surged an incredible 97%!

Company management attributed the growth to the government stimulus package, which enabled more customers to buy their products online and take advantage of WMT’s same-day delivery and curbside pickup services.

Home Depot, one of my Growth Investor companies, also knocked it out of the park. Comparable sales increased 23.4%, while comparable sales in the U.S. rose 25%. Total second-quarter sales jumped 23.4% year-over-year to $38.1 billion, exceeding analysts’ forecasts for $34.53 billion.

And, as the cherry on top, HD announced that it will pay a second-quarter dividend of $1.50 per share on September 17. This dividend represents the 134-straight quarterly dividend that the company has paid.

Now, since we’re on the subject of major retailers, I’d be remiss if I didn’t discuss two other big companies that announced blowout second-quarter results this week: Lowe’s Companies (LOW) and Target (TGT). So, let’s see how their reports stack up, too.

Lowe’s Companies’ reported second-quarter net earnings of $2.8 billion, or $3.74 per share. This is a whopping 75% year-over-year increase from earnings of $2.15 per share from the second quarter of last year. Sales were also strong, coming in at $27.3 billion. E-commerce sales, in particular, surged 135%.

Company management credited the success to “a wallet share shift away from vacations, away from dining out, away from apparel purchases… People are taking those dollars and they’re investing in their home.”

Similar to Lowe’s, Target believes the growth was largely due to folks spending money on retail rather than restaurants, movies or vacations. And, since the company was deemed an “essential retailer,” it also grabbed more market share. TGT brought in 10 million new online customers – upping its market share by $5 billion in the first half of 2020.

Clearly, this was a stunning earnings season for the big-box retailers. So, it’s no surprise that each company is a “Buy” in Portfolio Grader. 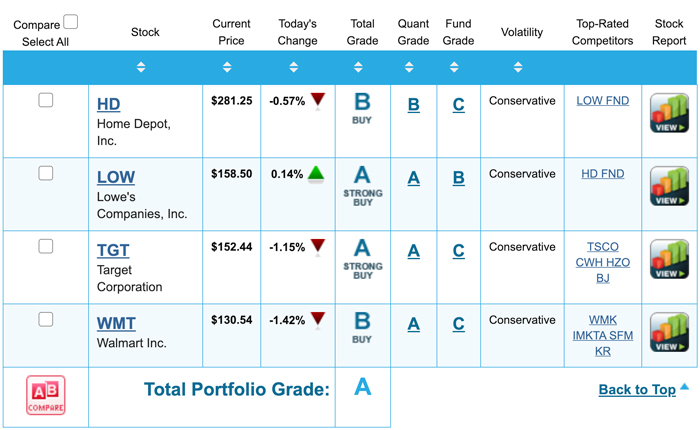 Now, as I mentioned earlier, HD is one of my Growth Investor stocks. Subscribers who bought HD when I first recommended the stock back in December 2017 would be sitting pretty with about a 49% return right now.

But I don’t expect the fun to stop there.

I know I’m typically a little grumpy during this time of year. In fact, sometimes I’d personally like to shut the stock market down in August! The reality is that, after the second-quarter earnings announcement season winds down, it’s normal to see an increase in profit taking. Add in the fact that most of Wall Street and Europe are on extended vacations, and trading volume diminishes until mid-September. As a result, we often find ourselves swimming in choppier waters.

However, I am very, very excited this year. Thanks to the incredible second-quarter earnings season and analysts revising their estimates higher for the third quarter, there are more stocks popping up on my radar. In fact, I added four new stocks to my Growth Investor Buy List late last month and expect to recommend more stocks to my Buy Lists in the coming weeks and months.

Of course, I will only add the crème de la crème – fundamentally superior stocks with growing sales and earnings and increasing institutional buying pressure (i.e., stocks like HD). And I do expect to find more fundamentally superior stocks, thanks to a special stock market event taking place. I call it a Foreshock, and it bodes well for my Growth Investor companies.

To find out why, click here to watch my free briefing called the Financial Foreshock Summit. There’s an incredible bull market rally coming, and I don’t want you to miss out.