Now if there’s one thing we can say for sure, it’s that this year has been nothing but uncertain. The reality is Wall Street is juggling a whole lot right now; namely, the coronavirus, a weakening U.S. economy, quarterly earnings, rising tensions with China and, of course, the upcoming presidential election.

The good news is there are multiple coronavirus vaccines in the pipeline and the second-quarter earnings season has been stunning. (I can’t recall the last time earnings surprises were this big!) A vaccine would be a boon for the U.S. economy, as state shutdowns and restrictions would finally be lifted and folks could get back to work.

And positive earnings results are always good for the stock market. According to Factset, 84% of the S&P 500 companies have posted an earnings surprise. So, I remain incredibly bullish on stocks right now – especially the fundamentally superior ones.

The great news is that the presidential election year can kick the stock market into overdrive. In fact, it’s one of the reasons why I expect stocks to win The Race to 40k – a friendly bet between my InvestorPlace colleague Matt McCall and me over whether bitcoin or the Dow will hit 40k first. If you missed it on Wednesday, you can watch a replay of the event here.

We spoke yesterday about the positive impact the ultralow interest rate environment has on the stock market, so in today’s Market360, I want to focus on why this presidential election year should also be a major catalyst for stocks. Let’s get to it!

The truth of the matter is the stock market often meanders steadily higher in the months preceding the election, since the candidates are “sucking up” to voters. We haven’t seen much of that yet, as details are still fuzzy on how (or where) the DNC and RNC will hold their presidential conventions. However, I expect to see a lot more “sucking up” in October when the presidential debates are in full swing. 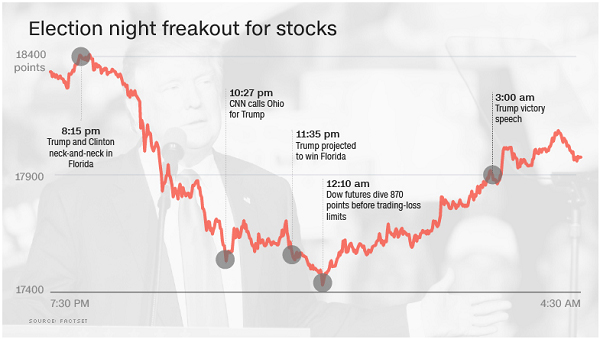 Clearly, the numbers are in my favor!

History tells us that the stock market typically treks higher regardless of the political party in office. Case in point: Under President Obama and President Clinton, the Dow surged 148% and 229%, respectively.

The bottom line is investors are set to make some real money over the next 12 months. And, as I discussed in yesterday’s Market 360, with interest rates at ultralow levels the stock market is simply the best game in town.

To find out the other reasons why I believe so strongly that the Dow will hit 40K first, I encourage you to set aside some time to watch the replay of my debate with Matt: Dow vs. Bitcoin: The Race to 40k. This is something you definitely don’t want to miss, as both Matt and I each gave away one of our favorite picks. Click here now for all the details.

I will be back in touch tomorrow morning to explain why a second Congress stimulus package should also drive stocks higher, so make sure to keep an eye on your email!