I hope you got to view last night’s debate, Dow vs. Bitcoin: The Race to 40K, between myself and my colleague Matt McCall.

I had a great time debating Matt and we’ve got quite the wager riding on the outcome:

He thinks bitcoin will climb 250% to reach $40,000 first, while I firmly believe the Dow will rise 50% to reach 40K before bitcoin does. At the event, we each gave away one of our favorite picks.

More than 25,000 people signed up to watch us debate, and the event was completely free, so if you haven’t watched it yet, you’ll want to take advantage of the replay as soon as you can.

I’d never bet against Matt over the long term, and I’m a huge fan of his top-down research approach. I just think the tailwinds behind stocks right now are too powerful.

Today, I want to start with one of the biggest factors why: interest rates.

The reality is that low interest rates and a Federal Reserve that’s focused on keeping economic growth humming are perhaps the greatest allies any investor could ask for.

You saw it back in March when the novel coronavirus first hit. The moment it looked like COVID-19 was going to be bad for the economy, the Fed jumped in with a huge rate cut of 50 basis points.

The Fed went on to increase the amount available in the overnight repo market by a whopping $1.5 trillion. Then it injected another $1.5 trillion into the financial system, for a total of a whopping $3 trillion.

More importantly, every time the Fed has stepped in to push rates lower, the stock market has climbed higher.

In the chart below, you can see the market’s low on March 23, which coincides with the Fed’s biggest monetary intervention. Since then, the Fed has been implementing and adding to these programs. And the market has bounced 46% off its March 23 lows, though, it’s still down year-to-date. 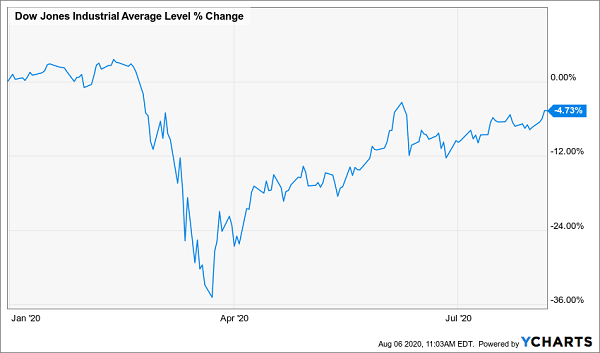 The Fed is pumping more money into its bond buying programs than the European Central Bank (ECB) in an obvious attempt to spark inflation. Remember, deflation is the Fed’s worst enemy, so it’s going to do whatever it can to stop it. The dollar recently fell to a two-year low in late July, while July represented the worst month for the U.S. dollar since April 2011. As I’ve made clear in a previous article, this is not as alarming as it sounds, and in fact, is one of the reasons I expect stocks to win The Race to 40K!

And the Fed’s not likely to ease up until its key indicators like GDP bounce back. The Federal Open Market Committee (FOMC) said in its July meeting the Fed would maintain its key interest rates between 0% and 0.25% through 2022. It will also continue to increase its holdings of Treasuries and mortgage-backed securities to smooth market functioning.

Overall, the FOMC was incredibly dovish in its July statement, which means it’s likely to continue to promote a weak U.S. dollar, as well as higher gold prices.

The combination of these factors led the 10-year Treasury bond to recently hit its lowest level — 0.507% — in 234 years!

I truly remain shocked how the Fed has flattened the entire yield curve so long-term interest rates don’t fall below short-term rates and damage the banking system. The 10-year Treasury barely yields more than the short-term T-bills, and the 30-year Treasury is barely above 1%!

Fortunately, in terms of recovering from COVID-19, many economies are bouncing back impressively thanks to aggressive central bank actions.

But in the meantime, U.S. debt is forecast to equal the size of the economy this year and could rise to 107% of GDP in 2025. This is why I believe we could be in zero interest rates forever!

I hate to be a party pooper, but if the Fed raised rates, it would break the country. So, we’ve fallen into the same trap as Japan, Europe and other countries. Regardless of who becomes president after November, the massive federal budget deficit and $26 trillion in debt is not going away.

The bottom line is that one of the biggest beneficiaries of the current and likely endless 0% rate environment is the stock market.

Price-to-earnings (PE) ratios are elevated in the current environment, especially in the wake of many S&P 500 companies posting second-quarter positive earnings surprises. In fact, I’m SO pleased with this earnings season that it’s another reason I’m so bullish on stocks – and particularly the ones that meet my strict growth criteria.

But several of the “Strong Buys” my Portfolio Grader has uncovered have much further to run. My Breakthrough Stocks, for instance, are now trading at only 17.8 times average fiscal 2020 earnings. Compare that to some “bubble” stocks like Tesla (TSLA), which trades at 166 times forecasted 2020 earnings.

Bottom line, the Fed has thrown in everything including the kitchen sink to set the stage for an explosive stock market surge. In the current 0% interest rate environment, stocks are one of the biggest winners.

The truth of the matter is that money is not leaving the stock market but simply being reshuffled as some bubble stocks are pricked. The stocks with positive sales and earnings, as well as positive third-quarter guidance, have emerged as market leaders. From here, they’ll lead the way to victory in my gentleman’s wager with Matt.

Click here to watch my Dow vs Bitcoin debate with Matt and get more of my analysis of why stocks are set to surge. Plus, of course, you’ll also get Matt’s take on why he thinks bitcoin and cryptocurrencies will trek higher.

Then check back here tomorrow when I’ll discuss how I think the presidential election will impact the markets going forward.