I believe stocks are the best game in town. I’ve been saying that for years now – but I wouldn’t keep saying it if it weren’t true.

Commodities? Forget it. One minute, you’re up at $100 per barrel oil. The next minute, someone like Saudi Arabia decides to start a price war, and prices crash back down again to $20. (In fact, as we learned this spring, it can get even worse than that. When COVID-19 struck worldwide, oil prices crashed all the way into negative territory.)

Cryptocurrencies? Well, I’ll let my colleague Matt McCall make his case for that next Wednesday at our 1-on-1 debate, Dow vs. Bitcoin: The Race to 40K.

Bonds? You can forget those, too. In fact, the Treasury yield situation has gotten so extreme that I believe it will push more capital into the stock market than ever before.

That’s because we’ve never seen such a sustained push to near-zero interest rates. Even before COVID, rates had been very low for years. And until world economies regain their former glory, there’s no end in sight.

In June and July, we’ve seen the beginnings of a tremendous, sharp rebound in jobs and economic activity. But as much as we’d all like that recovery to be V-shaped, the Federal Reserve disagrees. They still expect a U-shaped recovery, which is why they’re still working overtime to manage the “yield curve,” so that long-term interest rates don’t fall below short-term rates and damage the banking system. The 3-, 5- and 7-year Treasury yields hit record lows. We had a very successful 30-year Treasury bond auction. And not just that, the 10- and 20- year Treasury yields are ultra-low right now, too, in addition to the 30-year.

Every time the Fed has intervened to push rates lower, it’s provided more “juice” for the stock market. This is a major reason why I’m so bullish on stocks for 2020 and beyond, and I’ll be putting my money where my mouth is, so to speak, at Wednesday’s free event with Matt McCall and myself.

Let’s take a look back at the market action since February: a perfect example. 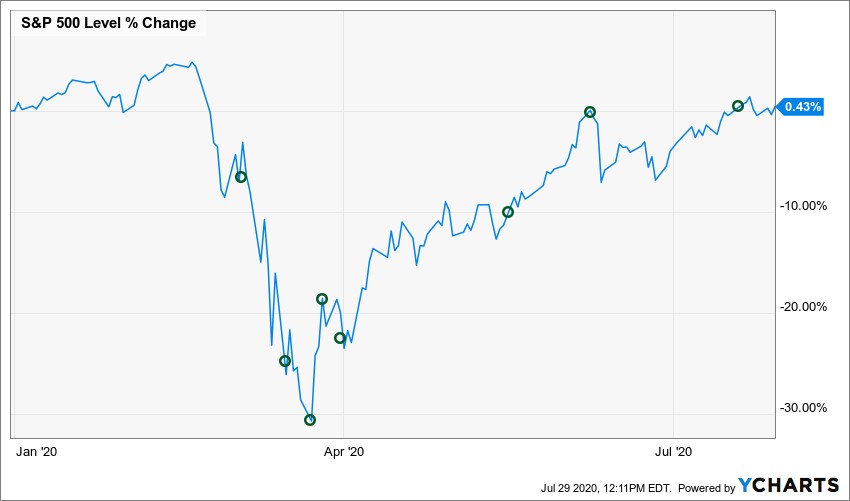 I’m sure you’ll remember that sharp drop starting February 20. Since then, the Fed has intervened several times, and I’ve marked the major dates in green circles above.

You’ll see that the first emergency rate cut (from 1.75% to 1.25%) on March 3 produced a sharp uptick in stocks. But then COVID-19 outbreaks began in earnest on American shores. On March 15, the Fed announced another cut to zero (where the Fed Funds rate remains today), as well as “at least $700 billion” in quantitative easing (QE). And the S&P 500 is up about 20% since then.

You’ll also notice that the Fed’s biggest monetary intervention – more QE, more lending to banks and to “Main Street” – coincides with the bottom for stocks: March 23. Since then, the Fed has been implementing and adding to these programs at various points. And the market gain is even more drastic, around 40%.

On Tuesday, the Fed just extended all emergency lending programs through 2020. So we’ll see the magnitude of the impact on the market’s bull run from here. I gave the “all-clear” for growth investors to start buying again on April 15.

My Portfolio Grader has been uncovering “Strong Buys” all the while. And the performance has been strong confirmation of my picks. My Top 5 Breakthrough Stocks, for example, have now reached gains as high as 75%, even 100%!

And that’s even with the big pause in economic growth worldwide. I’ve been extremely careful to own companies that can grow sales and earnings by double- and triple-digits in this environment. Imagine what they’ll do from here. I call these the “crème de la crème,” and the earnings potential may even be BETTER for these companies than what’s showing up in the numbers now!

So, this gives you a sense of how stock gains are “baked in” to the economic recovery. That’s even before you get into the fact that stocks yield so much more compared to bonds…

In other words, Treasury yields would have to grow five times to catch up to stocks. As they do, dividend yields will also climb proportionally – making stocks even more attractive.

So…given that stocks are five times as valuable to investors as bonds…you can see how the Dow going from 26K to 40K starts to look not just possible – but probable.

Now that you see where I’m coming from, RSVP now and tune in to our debate on Wednesday at 4 p.m. ET, where Matt McCall and I will debate whether stocks will reach that milestone first, or if bitcoin will. I’m very confident I’ll win. And that you’ll see the explosive potential of the stocks my Portfolio Grader is uncovering now.

In fact, I’ll be giving away one of my favorite stock picks on Wednesday…and, again, this event is 100% free, no strings attached.

As I say, I’m putting my money where my mouth is – and so is Matt. He’ll also be giving away a pick for free, to help investors profit as bitcoin also climbs to 40K.

Tomorrow, you’ll be hearing from Matt as to why he thinks Bitcoin can beat the Dow to 40K.

I’d never bet against Matt, long-term. I simply think that my horse in this race will get there first.

Click here to RSVP now for Wednesday’s Race to 40K debate and claim a free spot in the webinar.