Believe it or not, summer is now nearly halfway over. Not only is it earnings season – my favorite time of year – but it’s nearly time for Apple (AAPL) to make its annual return to the spotlight.

Previously, AAPL was getting attention for all the wrong reasons. Along with other big “franchise” companies, it’s easy to see that AAPL shares have been propped up by the Federal Reserve’s low interest rates. Bloomberg has even posited that the Fed’s bond purchases are doing the same thing. (In Apple’s last three bond sales, the company has announced that they would fund dividend payouts…but also share buybacks.)

But now we’re just a few weeks away from Apple’s annual “iPhone Day.” As the rumors build, I’d like to prepare you with my thoughts on Apple. As always, there’s our personal opinions on companies, their business practices, and their leaders’ decisions. But before we act on any of those, we’ve got to look at what the numbers are telling us.

And based on the numbers, I’m certainly not bearish on AAPL. Here’s its Report Card in the Portfolio Grader tool I use to find Growth Investor plays. As you see, it has strong fundamentals and gets the top score for its Quantitative Grade: 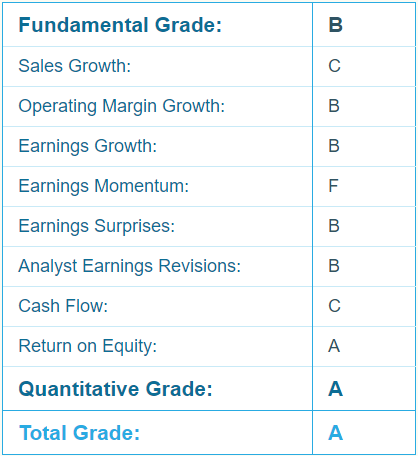 Here’s what I would say to Apple bulls, though…A better buying opportunity may be down the road. And, yes, it has to do with the big September event.

My friends at Bespoke Research specialize in historical stock trends. And last year, just before iPhone Day 2019, they analyzed the events’ impact on share prices.

As Apple devotees will recall, the September scheduling actually started with the “new” CEO, Tim Cook. In Steve Jobs’ time, announcements tended to fall in June (at the Apple Worldwide Developers Conference). With that in mind, Bespoke compiled all the dates, and here’s what they found: 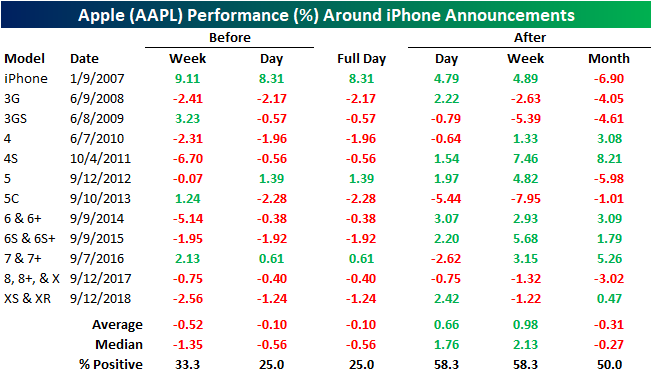 As usual, Bespoke has a lot of data points for us. Here are my two takeaways.

First, you’ll notice above, there tends to be a noticeable dip the week before iPhone Day. Then, there’s a nice bullish reaction in the following week. Sometimes, that even extends through the following month.

You can see why AAPL fans may want to wait and buy the dip.

But before they do, I’d urge them to study the exceptions to this rule. That pattern doesn’t tend to work out when Tim Cook gets onstage with a “new” iPhone that’s more incremental than innovative!

These exceptions are especially glaring when you turn to the dates when the iPhone was actually released to the public: 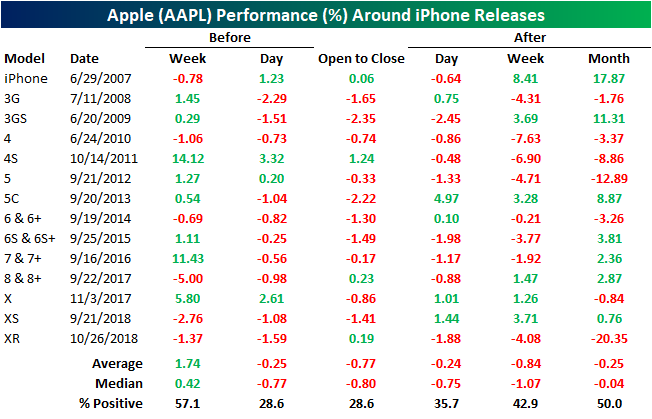 The first glaring example is 2012’s iPhone 5. This is the one that introduced the Lightning port, which suddenly made everyone’s charging cables obsolete. AAPL fell nearly 13% over the next month. Then, in October 2018, AAPL fell more than 20% after the XR was released! That was a difficult time for most stocks. But I’d also note that the iPhone XR was simply a less impressive (and, thus, cheaper) version of that September’s iPhone XS.

So now, the question is: Will this year’s iPhone impress the hecklers in the back row?

Well, this certainly is a time of change for the industry. iPhone competitors are already out there with flashy innovations like the Samsung Galaxy Z Flip and the new Motorola Razr, for example. Both are foldable – but not the old way (with the screen on one side and buttons on the other); with a screen that is itself foldable.

From what I’ve seen of Apple news and rumors, I expect Apple’s foldable OLED screen version may have to wait another year…

But I am anticipating that Apple will introduce a 5G phone in September.

After all, the networks are finally in place: AT&T (T) will have 5G nationwide this summer, alongside T-Mobile (TMUS), and Verizon (VZ) is hot on their heels. (Sprint also made good progress before being bought out and folded into T-Mobile.)

The press releases from Big Telecom will emphasize the “cool factor” of 5G, and how it’s up to 100 times faster than 4G. Device makers like Apple like it, too: Ultrafast speed means ultrafast apps, including games…even ones with augmented reality – which would certainly sell some subscriptions to Apple Arcade.

As an investor, I want you to think about 5G more practically.

5G is what’s going to keep us all connected in the modern economy. If you live somewhere without reliable (or any!) broadband access, you might have trouble keeping up with shopping or even finances in the “new normal.” That is, until ultrafast 5G wireless changes all that for you.

Now that we’re all upgrading to 5G from coast to coast, around the world, imagine all the technology involved. And, particularly, all the new hardware involved. This is where the best opportunity for investors comes in.

For my money, I’m not going to bet on any one application of 5G. Or even one provider of 5G. I want the companies who make all of it possible.

Big Telecom and device makers like Samsung and Apple all need 5G to maintain their edge – and get people into new smartphones. But the big profits will come from the companies that help create 5G.

One such company I like now is much lesser known than those companies but has excellent growth prospects.

This company is already one of the biggest semiconductor equipment manufacturers in the world. These days, its products for machine learning, optics, sensors and analytics are getting deployed for all sorts of next-generation technologies: the self-driving cars, robotics, cloud computing and the larger Internet of Things (IoT).

Most importantly for a Growth Investor, this stock is a “Strong Buy” in my Portfolio Grader now.

So, if that company doesn’t sound familiar to you, I’d like to change that. This is the kind of stock that can help you profit from all the 5G infrastructure that’s popping up everywhere.

I have a fresh, complete investment report on it, called The King of 5G “Turbo Button” Technology. You can secure a copy by watching my free briefing on 5G and joining us at Growth Investor today.