It’s been quite a ride for Match Group (MTCH) since I recommended it in my investing newsletters in September 2018. The broad market (including MTCH) soon ran into trouble before charging higher into 2020. As recently as January 6, MTCH was at all-time highs…and then the coronavirus started spreading.

Once again, stocks crashed in March, and MTCH was no exception. After all, this is the company that operates dating sites Match.com, Tinder, OKCupid and PlentyOfFish…but no one was going on first dates for the foreseeable future.

Nonetheless, MTCH staged an impressive rally through June, hitting new highs on July 2. Yesterday, however, I put out a sell alert for MTCH. I’d like to explain why, as it makes a great case study for investors of all stripes, wondering when (or whether) to take profits. 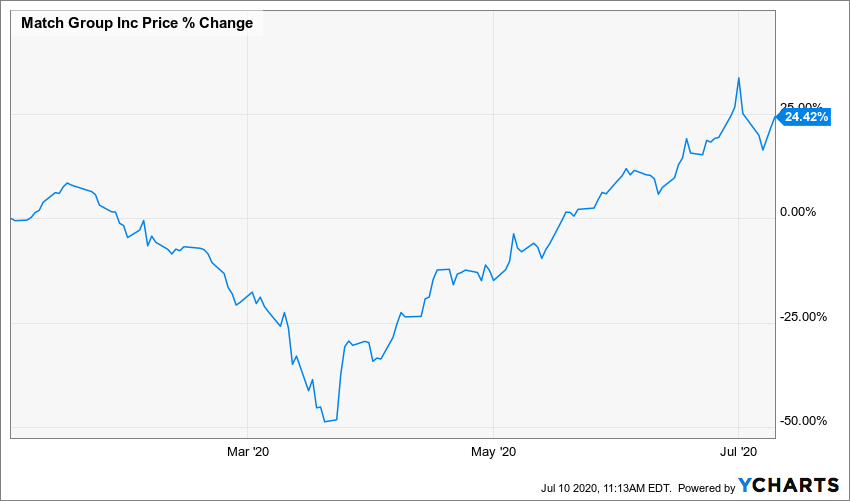 At the time of my sell alert, MTCH was up about 88% for one of my stock Buy Lists: Breakthrough Stocks. Even so, buying pressure began to dry up after the new highs, which coincided with a spin-off. Since its founding in 2009, MTCH had been a subsidiary of IAC Holdings (IAC), which also owns sites like Angie’s List, HomeAdvisor and Care.com. Now it’s time for IAC to “be opportunistic, be balance-sheet conservative, build up enterprises, and when they deserve independence, let them have it,” as its chairman Barry Diller said in the spin-off announcement.

Now, buying pressure is the single most important factor behind a stock’s Buy, Hold or Sell rating in my Portfolio Grader. We can try to outsmart the market all we want with niche plays that we think will be hot in the future. But, at the end of the day, institutional cash from Wall Street is crucial to a stock’s long-term success.

Then, reading between the lines of Diller’s “balance-sheet conservative” comment, you will notice that MTCH’s prospects aren’t what they once were. At least, according to Wall Street analysts, who are starting to cut their sales forecasts for Match Group.

I should note that MTCH’s new CEO, Sharmistha Dubey, says that online dating is thriving: average daily messages were up “nearly 30%” in April versus February. Match Group rushed to add video chat features, a format that’s more prevalent than ever, whether for “virtual dates” or work meetings.

The question is, will that translate into revenue growth? Wall Street says no. The current consensus is for $534 million in second-quarter revenues – less than half the 2019 figure. Then, for all of 2020, analysts expect $2.3 billion versus $4.8 billion in 2019. No wonder the “smart money” is bailing out.

With earnings announcement season right around the corner, you simply can’t afford to be holding a stock like this. Not when there are so many Strong Buys out there.

Now, if I’d bailed at the first sign of trouble – and joined the general panic sale back in March – my subscribers never would have enjoyed those all-time highs here in July. But looking ahead, the growth prospects are just no longer there. This is why in my services like Platinum Growth Club, I always take my cues from the fundamentals and my quantitative analysis. (Neither of which shows up on a stock chart…new highs or no.)

I’ve put together a whole Model Portfolio for subscribers, and MTCH is not in it. However, I did hand-pick four Top Stocks for July – and seven new buys! – in last week’s Platinum Growth Club Monthly Update.

I’ve been plenty busy in my large-cap newsletter (Growth Investor), small-cap newsletter (Breakthrough Stocks), and short-term stock service (Accelerated Profits), too. Platinum Growth Club is how you get access to all of it, like the two additional buys I recommended in the Breakthrough Stocks July Monthly Issue yesterday, plus exclusive live chats and my quarterly Portfolio Grader 500.