I know it’s easy to get “tunnel vision” and focus all your attention on the U.S. markets. While there are still plenty of opportunities here, there are also some big things happening overseas that you should be aware of!

Here in the States, everything but the Nasdaq is struggling to clear the 52-week highs. In China, the CSI 300 – comparable to our S&P 500 – has been racking up five-year highs.  European stocks have also struggled, but as I mentioned Tuesday, my stocks from Israel, Taiwan and particularly China have been impressive. Like any investor, I’d like to keep it that way! So, let’s take a look at the forecast for Chinese stocks here today.

First things first: I continue to get questions from readers of my investing newsletters about the U.S. Senate bill cracking down on fraudulent foreign companies, and “Is it likely that Chinese companies will be delisted, or will delist from U.S. exchanges?” The answer is yes – and no.

Companies that refuse to comply with all U.S. and global accounting standards and are getting “creative” with their sales numbers, like Luckin Coffee, probably will get delisted. (That is, once the Senate bill passes the House of Representatives, gets signed, and goes into effect.)

But foreign companies that want to trade as American Depositary Receipts, or ADRs, have to comply with accounting standards! That’s because they have U.S. banks vouching for them and auditing their numbers.

All of the Chinese companies I recommend for my buy lists like the Platinum Growth Club Model Portfolio are ADRs. So, while, non-ADR Chinese stocks could get hit by the posturing in Washington, D.C., I say this is no reason to sell or avoid the quality ADRs.

And, again, Chinese stocks certainly have been on a tear lately. For analysis, I like to turn to the analysts at Bespoke. Here’s the eye-popping chart they provided on Monday: 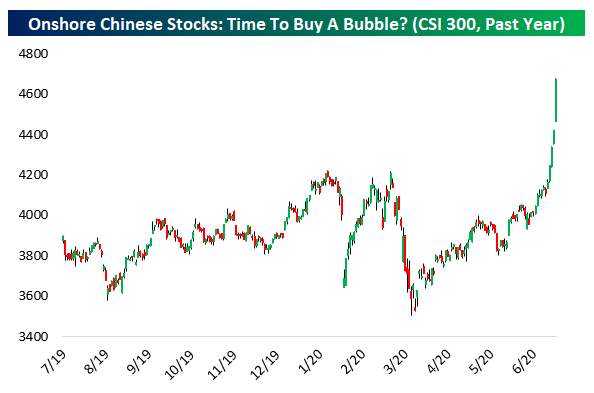 As you’ll notice, Bespoke titled this one-year chart: “Time to Buy a Bubble?” That’s because they put this event in context by running the data from previous rallies that also had “huge volumes, massive gains, and widespread retail participation.” And here’s how the current one-year rally compares: 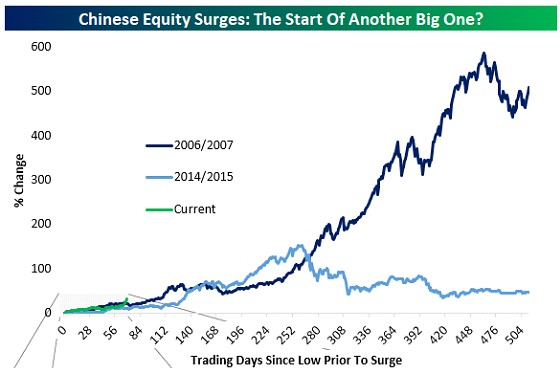 If history repeats, the current China rally could just be getting started.

Now, as investors, we’ve always got to ask ourselves what happens AFTER the big rally. And Bespoke had some interesting findings there, too. One year after such a rally, “the CSI 300 is lower two-thirds of the time with a median gain of -11%.” But of the one-third that was positive, the gains were huge, averaging over 60%! In other words, “The CSI is likely to have a large move in either direction.”

I know a thing or two about long-term gains, too. And the best way to ensure that your stocks move in the right direction is to follow a proven formula. Namely, you should stick with companies that A) have the strongest fundamentals and B) enjoy the largest institutional buying pressure on Wall Street.

This is what I’ve designed my Portfolio Grader to identify. Those two factors correlate to a stock’s Fundamental Grade and Quantitative Grade, respectively. And among Chinese stocks, I’m finding plenty of buys in my weekly Portfolio Grader scan.

One of them, as I mentioned in June, is Vipshop Holdings Ltd. (VIPS). Vipshop Holdings has been transparent in releasing quarterly results and filing annual reports. Yet VIPS pulled back about 14% around the time the “Holding Foreign Companies Accountable Act” was presented to the Senate and passed.

Well, guess what: The stock has since rallied about 47% from the late May lows. Much of this strength can be attributed to the company’s superior fundamentals. And I’m not just talking pre-pandemic: Sales for this e-commerce company have kept rolling in all year.

Vipshop Holdings’ first-quarter revenue came in at $2.7 billion, and earnings jumped 20.8% year-over-year. Adjusted earnings per share ADS were $0.20, crushing the consensus estimate for $0.11 per share by 81.8%.

For the second quarter, earnings per share are forecast to surge 768.2% year-over-year to $1.91 per share, up from $0.22 per share in the same quarter a year ago. Analysts also increased their earnings forecasts by a whopping 607% last week alone! So, another quarterly earnings surprise is likely.

Already, VIPS is up about 40% since I added it to the Platinum Growth Club Model Portfolio on April 1.

And, on Tuesday, I added another “Buy”-rated Chinese company as an Accelerated Profits trade. This one makes electric scooters, which are big business in China, whose cities are plagued by gridlock, air pollution and overcrowding.

Those problems are also present in other metropolitan areas, of course. Worldwide demand for electric scooters and bicycles is exploding, as they are viewed as a replacement for a car in many urban areas. The company I’m talking about, which is only six years old, has already sold more than one million e-scooters around the world. Besides its 1,000-plus stores in China, it operates in dozens of other countries, too.

Like VIPS, this new buy has also seen Wall Street analysts raise their earning forecasts by over 600% lately. Platinum Growth Club members received Tuesday’s buy alert – and ALL of my alerts, updates, podcasts and more. Click here for my free market “melt-up” briefing, where you’ll see what’s in store for Platinum Growth this year.