There’s a reason why the world relies on Amazon (AMZN) every day, and it’s not because they sell paperback books online. It’s because Amazon has a long history of spotting The Next Big Thing and getting a piece of the action.

Just look at grocery delivery, and how prevalent that’s become, with services like Instacart…and Amazon Fresh. Or ten years ago, when Netflix (NFLX) was taking off as a streaming service, Amazon Studios was getting ready to launch in Santa Monica, CA. Five years before that, Amazon started building “server farms” around the world, and now Amazon Web Services is its major profit driver!

So, when Amazon drops over a billion dollars on a self-driving car startup, then you’ve got to figure that the technology is no pipe dream, after all.

That’s just what it did on Friday with its latest buyout deal for Zoox.

For one thing, corporations that rely on delivery vans (Amazon being one) are keen to “go electric,” and self-driving capability is the icing on top. Now that electric vehicle startup Rivian is doing such big business with Amazon, making electric vans for its delivery fleet, General Motors (GM) is working on its own version. After all, United Parcel Service (UPS) and the U.S. Postal Service are going electric, too. FedEx (FDX), which has had 1,000 electric vans since 2018, is now installing 42 charging stations in California to support a larger EV fleet. This all creates a huge potential customer base for electric carmakers.

But interestingly, Amazon’s acquisition of Zoox seems to be about something else. And that’s self-driving taxis.

This is a goal that Uber (UBER), Tesla (TSLA) and Google (GOOGL) are also working towards. Back in 2017, consultants from McKinsey found that “robo-taxis” would be cheaper to maintain, promote ride-sharing with a better “user experience,” and help avoid car accidents by human drivers. Riding in a robo-taxi may even replace a lot of air travel, too.

China is a step ahead on this: As of February, its goal is to mass-produce autonomous vehicles (AVs) by 2025. If AVs can get more people pooling rides (thus getting other cars off the roads), and make delivery logistics more efficient, that’s a plus for China, with its densely populated cities. Robo-taxis also start to look more appealing amid the COVID-19 pandemic. The ones rolling out in Shanghai now have “self-disinfecting capabilities” as well as “driverless logistics.”

All this being the case, it’s no wonder Silicon Valley CEOs want their slice of the pie. The question is: How can this translate into investor profits?

Well, when you start plugging the current players into my Portfolio Grader, you’ll see quite mixed results: 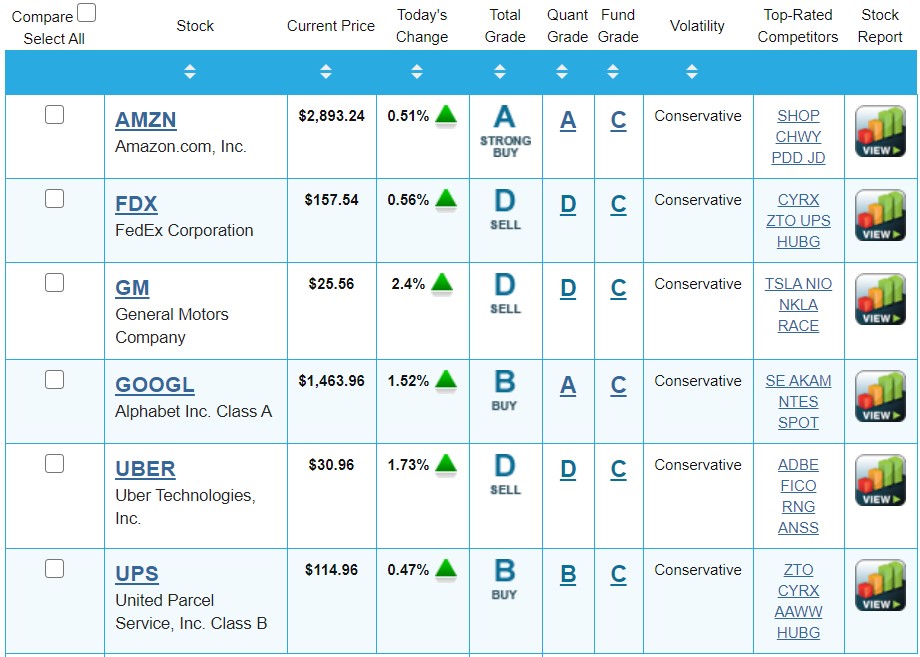 In fact, the fundamentals here are looking quite mediocre. All six of these stocks earned a “C” for their Fundamental Grades!

So, while I’d never bet against Amazon or Google, I do need to tell you that there are better buys in this space today.

I like to see an “A” for the Quantitative Score – reflecting institutional buying pressure on Wall Street – and an “A” for the company’s Sales Growth, Earnings Growth, and other key fundamental factors. That’s just the case now for the stock I’ve nicknamed The A.I. Master Key.

In a nutshell, I’ve always found that hardware is a great way to invest in tech trends: especially semiconductor chips. Back in the early days of PCs, it was all about Intel (INTC). The company had a tiny device – the silicon microchip – that barely anyone had heard of when IBM started putting them into the first PCs. But Intel’s chips were far and away the best.

Today, you’ll still find “Intel inside” just about every PC in the world. And its stock price has gone up 12,420%!

Now, the equivalent stock I’m talking about is helping drive “the next PC revolution”: artificial intelligence (A.I.). It just inked a deal with a major European carmaker in which the company’s chips will power autonomous luxury vehicles starting in 2024.

Personally, I recommended it a year ago for Growth Investor for a much broader reason: Its chips are involved in pretty much all the hot tech developments of our time, from virtual reality (VR) to cryptocurrency “mining” to machine learning, the next frontier of A.I.

As such, The A.I. Master Key has “beat the Street” every single quarter since I recommended it in May 2019. Yes, even this May (when economies ground to a halt all over the world), this company exceeded expectations, with 105% annual earnings growth and 39% annual revenue growth.

In other words, even before last week’s deal was signed, its fundamentals were exceptional. But look for its autonomous driving system to add to the company’s top and bottom lines in the future. Wall Street certainly does: It’s earning an “A” for Analyst Earning Revisions now (in addition to its growth factors).

Go here for my free briefing on the explosive investment potential of A.I. and claim your copy of The A.I. Master Key.