When I last wrote to you about airline stocks, they were struggling…to put it mildly. Six weeks into their sell-off, the group was still hovering around the March lows – after COVID-19 grounded flights and caused the industry basket, U.S. Global Jets ETF (JETS), to shed half its value in 11 trading days.

Frankly, airlines are still down in the dumps, compared to where they were as recently as February. But the situation is evolving rapidly. So, with American Airlines (AAL) leading the way back into the skies – and back into stock portfolios – let’s revisit the question I asked on May 1: “Are Airline Stocks a Bargain Buy Now?”

As I noted in early May, some analysts argued that first-quarter results were “largely irrelevant.” I countered that, even before they released those earnings, major airlines were already a “Sell” in my Portfolio Grader. That includes Southwest Airlines (LUV): a company I’ve generally admired, and which once brought me a 194% profit thanks to my stock-picking system.

Life is starting to resume, and that’s a huge relief. But from a public health perspective, COVID-19 is still out there…and it’s hard enough to keep from getting sick on a crowded flight, with everyone breathing recycled air.

So, we’ve got to balance the bullish case – flights restarting, government bailouts – with the not-so-bullish: risk of further outbreaks, and oftentimes, mediocre fundamentals to begin with!

As I always say, earnings are, well, the bottom line. The great buys I’m finding now are the companies growing earnings – and really “earning” them, by growing sales first – AND doing this over the long haul. Otherwise, the stock is best avoided.

That’s the lens through which we’ll evaluate airline stocks here today with my Portfolio Grader. Plus, there’s another often-neglected factor that’s becoming increasingly important in the “COVID economy.” Let’s take a look: 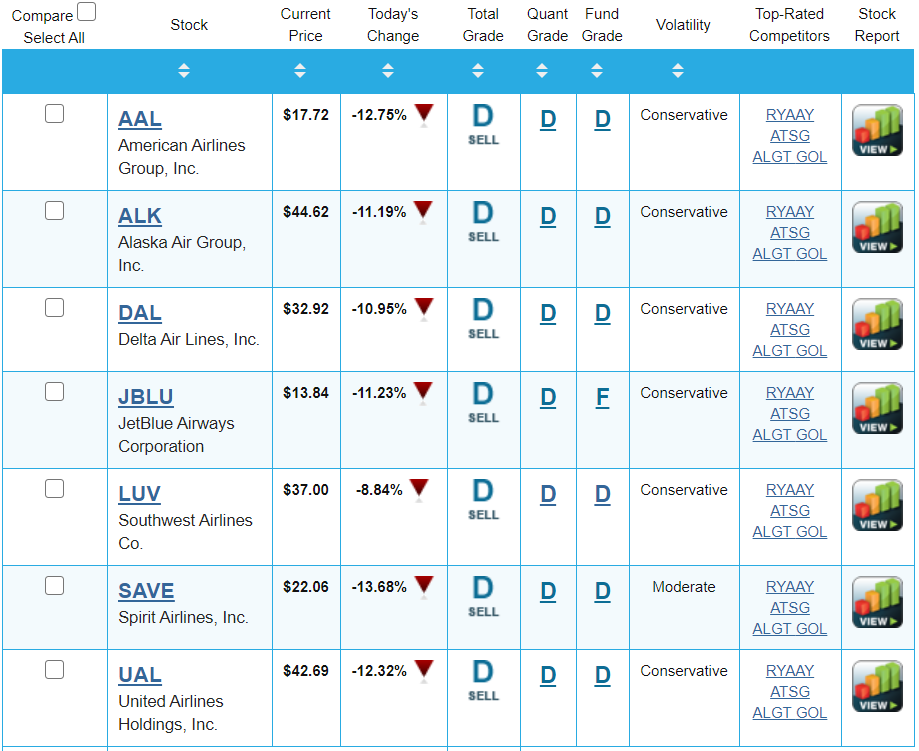 I run my Portfolio Grader scans each Saturday. That way, I get a week’s worth of market data before making the latest call: Buy, Sell or Hold.

So, this latest scan on June 6 included a sharp two-day rally among airlines. By Thursday, June 4, the four biggest U.S. airlines (UAL, AAL, DAL and LUV) had announced at least 25% more flights in June than in May. That day alone, airline stocks jumped 15% — even 41%, in the case of AAL, which is ramping up the most.

And, even so, all of these airline stocks earned a “D” for their Quantitative Grade, my proprietary measure of institutional buying pressure on Wall Street.
As you’ll also notice above, none of the Fundamental Scores were strong, either. Overall, the group is a D-rated “Sell.”

Since AAL is pulling away from the pack, so to speak, we’ll focus on that Report Card in particular: 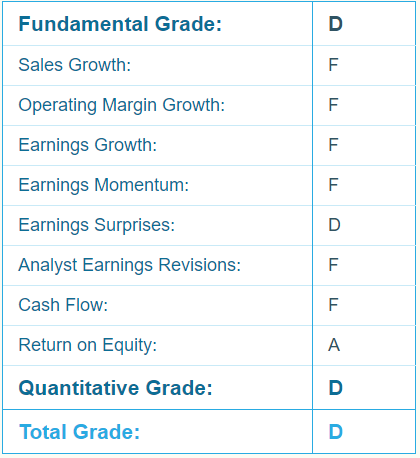 The reality is, investors are bidding up a stock that gets an “F” for most of its fundamentals. It’s not growing sales; that’s been pretty hard to do lately, I’ll admit. It has a poor track record of Earnings Surprises. And, with an “F” for Cash Flow as well, its cash reserves are woefully insufficient to ride out the storm.

I noted in May that AAL is taking on $11 billion in debt to keep the (overhead) lights on. But it’s not just airlines. I’ve pointed this out for other sectors, too, and it bears repeating: Economic recoveries don’t happen overnight – even in this unprecedented situation. The public health risk is still out there. Companies need a good, solid “rainy day fund” for just such a time as this one.

However, not one of the major airlines I just showed you rates higher than an “F” or a “D” for Cash Flow.

So, just keep in mind: Sometimes there’s a difference between an “essential business” (which airlines undoubtedly are) and a safe, long-term investment.

That’s especially true when you’re looking for safety and growth – and plenty of it, as we are at Accelerated Profits.

Like AAL, my new buy for Accelerated Profits has doubled recently. Unlike AAL, it’s still a “Strong Buy” now. This stock’s fundamental scores include an “A” for Sales Growth and Earnings Growth, plus a “B” for Cash Flow. And for the single most important score, the Quantitative Grade, it’s an “A” as well.

Without further ado, go here for a free briefing on my new Accelerated Income Project. If you take part today, you’ll get full details on this and several other Strong Buys now.

Note: This new recommendation could be one of my biggest winners from The Accelerated Income Project.

Just recently, I unveiled this Accelerated Income Project, which features a special type of investment that can hand you an incredible amount of real income in no time.

As I was doing research for my new income project, I found a way to target this investment left and right…

In fact, I just targeted another one not too long ago…

And this afternoon, I’m officially adding it to my Accelerated Income Project Buy List.

You can learn how to access my brand-new recommendation—and all of my new income research—by going here.