It’s been more than two months since stocks hit a bottom (on March 23). If I’d have asked you which sectors would perform best afterwards, I bet few of you would have guessed marijuana stocks! After all, the group has been down in the dumps for more than a year. Yet the ETFMG Alternative Harvest ETF (MJ) is up roughly 47%.

For context, that’s better than technology stocks (+44%) and even health care stocks (+39%); it’s nearly twice the gain in consumer staples over the time period.

There’s a few things that might be going on here. During the COVID-19 pandemic, 30 U.S. states have allowed dispensaries to continue operating as “essential businesses,” particularly for medical cannabis. But, long-term, investors are looking forward to full legalization in states like New Jersey and New York. Then, marijuana bulls say, that would pressure the U.S. government to legalize federally – and open up a multi-billion-dollar market.

However, in this industry, there’s hopes for the future, and then there’s what the numbers are telling us now. Numbers are where I take my cues for Accelerated Profits and my other Buy Lists. So, that’s what I’d like to lay out for you today.

On the “bad publicity” side, Canopy Growth (CGC), by far the biggest pot stock by market cap, announced a $1 billion net loss in the first quarter. Assuming that the marijuana industry’s best days are still ahead, investors are used to negative “earnings,” and prefer to focus on the companies’ tendency towards huge revenue growth. Yet in this earnings report, Canopy Growth turned in revenues that were just 15% higher, year-over-year. That’s less than half the growth analysts had expected.

Its fellow Canadian marijuana giants reported a mixed bag. Cronos (CRON) beat widely on earnings but fell well short on revenue estimates. On the flip side, Tilray (TLRY) reported a larger quarterly loss than expected, but beat on revenues!

In the bullish corner, Aphria (APHA) posted revenues and earnings that were twice what analysts had anticipated. GW Pharmaceuticals (GWPH), the British company that makes the seizure drug Epidiolex, also beat Wall Street expectations on both fronts. Revenues grew 207%, year-over-year, and a net loss of $8 million was far less than -$50 million in the year-ago quarter.

What really got people excited was Aurora Cannabis (ACB). The stock is up about 110% after Aurora’s quarterly release on May 14. ACB beat on revenues, with 23% year-over-year growth, and said it expects to be profitable next year.

Well, when I run these stocks through my eight fundamental metrics and Quantitative Score, here’s the bottom line from Portfolio Grader: 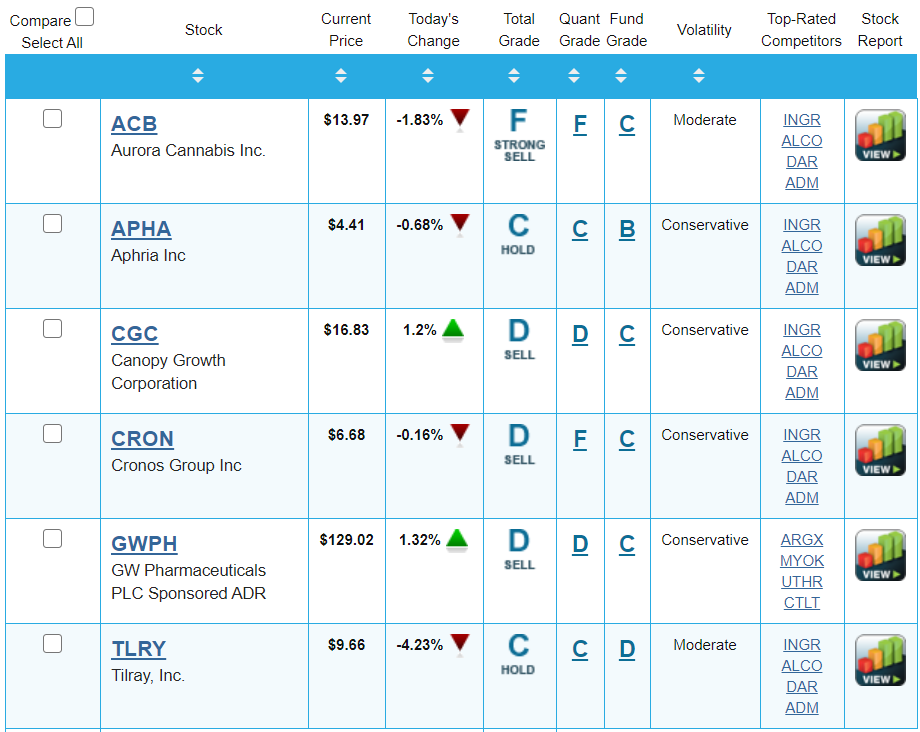 As you see, not a single of these big, flashy pot stocks earned a “Buy” rating. Trust me, there are much better buys now, if you know where to look.

In fact, Aurora Cannabis actually rates a “Strong Sell.” Take a look at the Report Card for ACB: 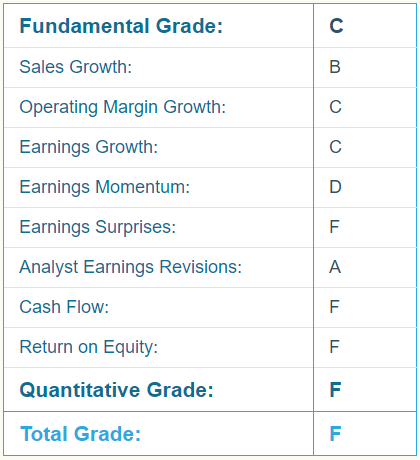 Sure, there’s Sales Growth. Sure, it’s gotten positive Analyst Earnings Revisions. But when you take a closer look at the fundamentals, Aurora falls short on its profitability metrics, and its “war chest” is pretty light, with an “F” for Cash Flow.

But the worst strike against ACB is the “F” for its Quantitative Grade. Evidently, Wall Street turned against the stock after Canopy Growth fell short last week. Aurora has also got some very pricey acquisitions in the pipeline, between its MedReleaf deal in Canada and its new buyout of the U.S. CBD store Reliva. 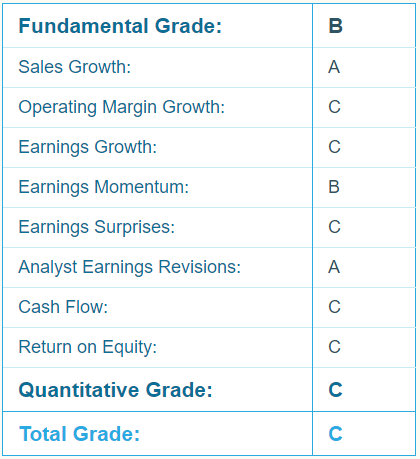 There’s a lot for marijuana investors to like here, including an “A” for Sales Growth. But most of its other scores are lackluster, and that includes the Quantitative Grade of “C” that indicates institutional buying pressure.

At the end of the day, I don’t buy based on hopes and dreams. I buy based on profits and future earnings growth that will give stocks true staying power over the longer term.

And for a lot of pot companies, that’s a big question mark. There are lots of varieties and differences in experience when it comes to marijuana, and nothing has been settled on what works best for the marketplace. Vaping is an unknown, in terms of long-term effects. And the CBD market is booming, but without regulations, the quality is very mixed.

Now, am I completely against the marijuana space? Absolutely not.
I just prefer to focus on the companies that have already proven their profitability with track records of solid growth. The “legit” ones, if you will.

For example, in my Accelerated Profits service, I once recommended Shopify, Inc. (SHOP), a Canadian company that includes cannabis in its online store. At the time of my recommendation in January 2019, the company had posted an average 211.7% earnings surprise in the previous four quarters.

The result for my subscribers? We locked in a solid 46% profit in SHOP in just three months.

I also recommend the “landlord” of medical cannabis growers in another newsletter. And when it comes to Accelerated Profits, I’ve put out four buy or sell alerts in the last week. Besides locking in a roughly 260% profit in Paycom Software (PAYC), I’ve been finding several other stocks I’m much more excited about now.

My latest buy alert on Wednesday was for a little-known electronics manufacturer. That might not sound exciting, but the company more than doubled its earnings, year-over-year, and does 100% of its manufacturing here in the United States. With global supply chains breaking down or stretched thin lately, that’s a big plus. With an “A” for both fundamentals and the Quantitative Grade, the stock’s a “Strong Buy” now.

Go here for a free briefing on my new Accelerated Income Project and sign up for full details on my hottest new buys.