It’s going to be a long, hot, tense summer. And that includes U.S.-China relations. I’ve been having readers ask me, “Are they going to ban Chinese stocks from listing in America?”

The short answer is: No. And I’ll explain further, but first, I’d like to address why folks are wondering this.

Muddy Waters Capital, a research firm that specializes in accounting fraud and “serious fundamental problems,” is getting ready to do a big presentation at Berkeley Law School. Its founder has a scheduled talk there on June 23 for “Fraud Fest 2020,” and he insists that Chinese companies are pretty much all fraudulent.

That’s just not true, folks. A lot of Chinese companies follow all the rules.

Some don’t, and these are the ones you hear about in the news. The “Starbucks of China,” Luckin Coffee (LK), is one example. Luckin was caught faking $310 million worth of sales, and it will be delisted from the Nasdaq in the next few weeks…but not before losing $12 billion in market cap since January.

In May, both Republicans and Democrats in the U.S. Senate responded with the “Holding Foreign Companies Accountable Act.” It just passed two weeks ago; now it’s headed to the House of Representatives. The bill reemphasizes that all companies have to allow annual audits by the U.S. Public Company Accounting Oversight Board (PCAOB). If a company fails to comply and gets three strikes, then they’re out – off the American stock exchanges.

Ultimately, Chinese stocks are being held to the same standard as any other stocks, and I agree with that. I’ve never had any problems with any of my Chinese stocks…all of which I’ve checked personally into their fundamentals.

Companies everywhere want the credibility of listing on the NYSE or the Nasdaq. It says, for example, that your company follows “corporate governance” standards, like a majority independent Board of Directors. (In the new Senate bill, Chinese companies must disclose any government control.)

Similarly, it boosts credibility when a foreign company has a U.S. bank vouching for them and combing through all the books. These are the companies that trade as American depository receipts (ADRs). Among Chinese stocks, that group includes Vipshop Holdings (VIPS), which soared more than 8% on its first-quarter earnings report. (I added VIPS to my Accelerate Profits Buy List a few weeks prior to the earnings announcement – so our position is up more like 15%.)

That’s not to say that Chinese stocks won’t face further volatility. As the Senate bill gets debated in the House of Representatives, the non-ADR Chinese stocks might get hit…but not the quality ADRs.

The bottom line is, the Senate bill does not impact any Chinese stocks that comply with all U.S. and global accounting standards. And, in the big picture, the best Chinese companies like VIPS (and other top-quality stocks I recommend in my newsletters like Accelerated Profits) should weather the storm and bounce back strongly from any dips.

When I talk about “high-quality stocks,” I’m thinking back to my own days as a corporate accountant. Companies will share whatever earnings calculation looks best – but then they’ll also report earnings according to generally accepted accounting principles (GAAP).

For the record, Vipshop Holdings has not shied away from the required PCAOB audits I discussed earlier. And VIPS hasn’t had a problem with GAAP earnings, as the chart below demonstrates. In fact, the actual results (orange bars) have generally been well above Wall Street analyst estimates (blue bars). 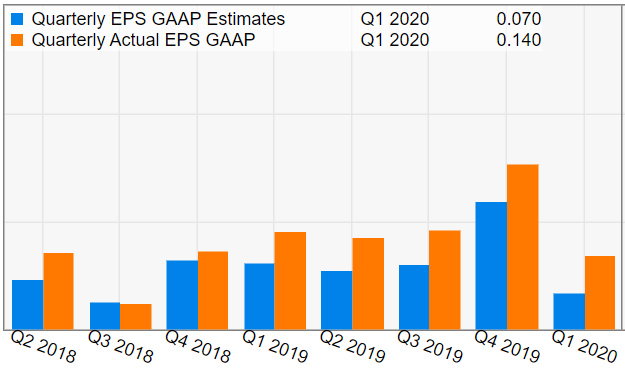 That includes Vipshop’s latest quarter, which beat expectations on revenues as well as earnings. First-quarter revenue came in at $2.7 billion, versus expectations for $2.54 billion…in addition to the GAAP earnings per share (EPS), which as we saw above came in double the consensus estimate.

In total, I’ve hand-picked six Chinese stocks for Accelerated Profits. Five of these six companies posted stunning earnings results for the most-recent quarter. In fact, they posted an average 51.8% earnings surprise. And they’ve held up fine even with the Senate bill cracking down on audit-dodgers. All of our current Buy List holdings do comply with these standards, and the bill will not affect them.

Now, that’s not to say there aren’t bubbles out there in the market – and short-sellers trying to “prick” them. I worry immensely about the electric vehicle (EV) industry, for example. Europe is carrying Tesla (TSLA), and Europe had a huge drop in overall sales, including EV sales. EV sales are down dramatically in both the United States and China for the last three quarters. But we’ll see.

In the meantime, I’ve been finding plenty of “Strong Buys” elsewhere and announcing them in my Accelerated Profits buy alerts. Click here to learn more and join in.