Well, folks, we’re coming up on Memorial Day. Once we’ve honored our servicemembers, particularly those who we’ve lost, it’s the time of year for that old Wall Street cliché.

You know the one I mean: “sell in May and go away.”

First of all, algorithms never go anywhere, and so much of the trading is done by computers these days. This year, the physical trading floors have been closed anyway, due to COVID-19 – and they’ll actually start to reopen on Tuesday!

So, who is really going anywhere? Perhaps if you’re a fancy Wall Street type managing $10 million portfolios for wealthy clients. These are the ones who can step back and simply cash a dividend check for $300,000. But for most of us, dividends alone aren’t going to pay the bills, as we discussed Friday.

As for the bond market…forget it! The reality is, those haven’t yielded enough to pay the bills for a long, long time.

Let me be clear: Bonds are exactly the wrong place to put money right now. I’ll help you steer clear of this traditional income investment that’s no longer worth your time; that’s one reason I’ve launched my new Accelerated Income Project.

With The Accelerated Income Project, I’ve designed it so you can get the income you need on a regular basis. And no: It doesn’t require using options or any “trick” investing.

So many investors have spent years getting lousy market returns and now they need a strategy to catch-up to live the life they’ve always dreamed. That’s what we’ll be discussing here in Market360, in this series of articles: Your Accelerated Income Guide.

Each day, we’ll be talking about how I find “accelerated income” stocks: the ones that can shoot up quickly … and provide you the extra income everyone can use … now more than ever.

Winners and Losers of the Bond Market Chaos

I’m a stock picker. I remain impressed how the Federal Reserve has kept control of Treasury bond yields, which have stayed ultralow while the stock market has improved.

Going forward, the Federal Reserve’s hands are tied by the economic fallout from COVID-19. And the lower the 10-year Treasury bond yield, the stronger the foundation under the stock market.

Remember: When bond investors get nervous, they tend to favor short-term bonds (rather than tying up their money for 10 or 30 years of uncertainty). This pushes the price of those bonds down – and yields up. As a result, the short-term bonds may even yield more than the long-term bonds!

This is exactly the situation officials at the Federal Reserve (and other central banks) strove to avoid with their emergency rate cuts: 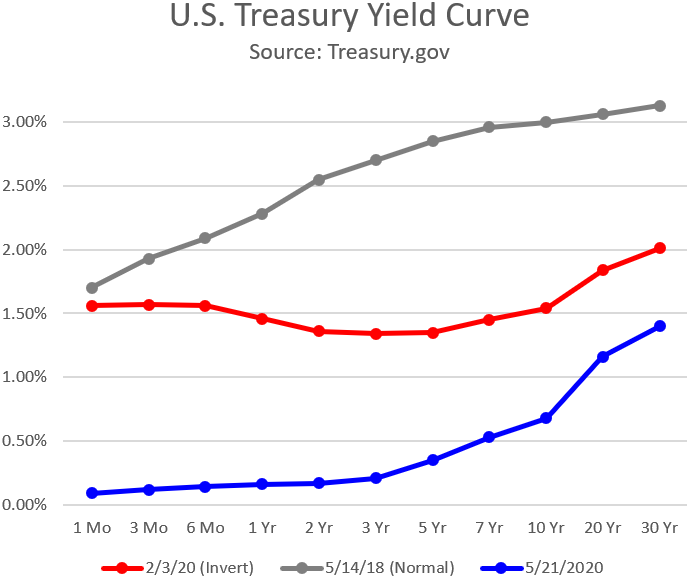 As you see above, yields might be drastically down, but at least they’re not inverted like they were in February. And that was before so many businesses had to close amid COVID-19 outbreaks.

By keeping the “yield curve” from inverting in this way, the Fed protects the big banks. Loan interest rates typically track longer duration bonds, like the 10-year. So, if banks were forced to charge you less on your loans and pay more to move money around themselves, they could be in real trouble. Thus, by keeping the overnight deposit rate (the Fed funds rate) near zero, the Fed prevents even more economic fallout.

Now, these ultralow rates can, of course, be rough on ordinary investors and savers like us! But at least we can turn to better strategies like The Accelerated Income Project.

The “Safe” Approach for Income Is Not What You’d Think

A lot of folks get out of stocks and into bonds when they retire, because they think they’re safer.

But let me tell you, that’s the wrong way to go. And that would be a dangerous approach now, because it relies on short-term thinking.

The bottom line is, stocks have consistently outperformed bonds for decades.

So, when you look down the long road of retirement, do you want less money? Or more money?

What I uncovered with my Accelerated Income Project is the best of all worlds: the potential for large “paychecks” in a short time. And it’s a strategy you can apply consistently. That’s because it works by targeting high-quality companies – the ones that grow and profit when others simply cannot. Money flocks to these stocks, especially in a troubled market.

Apply my strict criteria, over and over, and you’ll produce much fatter checks than you’ll receive anywhere else.

Note: On Thursday, I released a flash alert with two new buys, and you’ll get full details by trying The Accelerated Income Project today.

These two new buys are very different companies, but both were able to keep operating during the pandemic. And, most importantly, both companies produced double-digit revenue growth in the first quarter.

Even better, both grew earnings as well. Both expect to do so next quarter, too: by as much as 166%!

That’s especially valuable when so many other companies are struggling with profitability – and especially for The Accelerated Income Project.

So, now that the right companies are pulling away from the pack, now’s just the right time to embark on our new hypergrowth initiative.