With most folks staying at home, people are getting creative in order to stay connected with the outside world. So, it’s no surprise that business conference apps’ growth is surging. And the companies that are making this possible behind the scenes are a must-have for growth investors.

According to App Annie, between March 14 and March 21, iOS and Google Play saw a record 62 million downloads worldwide – a 90% year-over-year increase from 2019. Most of that growth came from Google (GOOGL), Microsoft (MSFT) and Zoom Video Communications’ (ZM) video apps, like Hangouts, Teams and Zoom Cloud Meetings.

Aside from millions of people using video apps to talk face-to-face, millions are also making and sharing videos. Take TikTok, for example, which makes short mobile videos. As of April, TikTok has around 800 million users and has been downloaded more than two billion times internationally.

Social media, in general, is seeing an uptick in users, too. According to DataReportal, there are now 3.81 billion social media users. 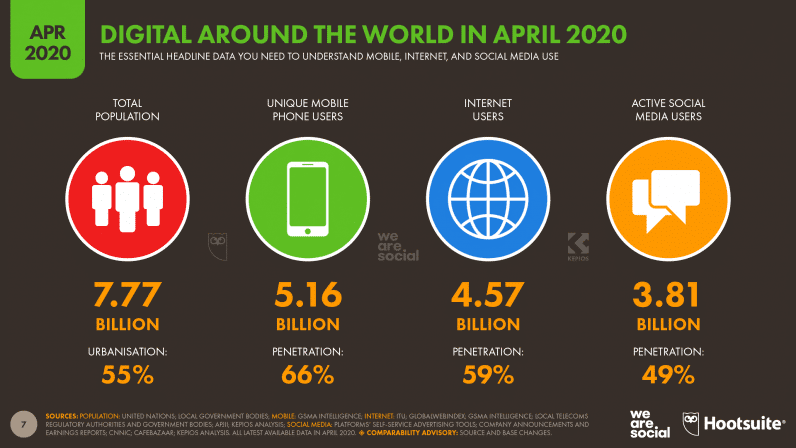 Source: The Next Web

Of course, it’s not all about videos and video conferencing. Folks are sharing plenty of photos, too. Instagram found that one billion people use its app every month, with 500 million people using its Instagram Stories feature every day.

Many investors are focusing on the companies that provide the platforms for people to connect, but there’s another investment opportunity here that’s being overlooked: cloud computing.

The reality is that there is a lot of data that needs to be housed and backed up somewhere. And cloud computing fills that need.

So, it’s no surprise that the tech giants – Microsoft, Amazon (AMZN) and Google – are trying to take over the market. During the first quarter, the companies brought in $26.3 billion combined in cloud computing revenue. Microsoft’s Azure made $12.28 billion; Amazon’s AWS saw $10.22 billion; Google’s Cloud totaled $2.78 billion.

As more and more data is created, the demand for data storage will only increase. This is why cloud computing companies are on my list of “recession-proof” stocks. They should do well regardless of where the market turns next. On my Growth Investor Buy List, not only do we have Microsoft, but several other cloud computing companies that are well-positioned to benefit from this demand.

This company has cloud computing applications to manage a variety of internal departments—from IT to Security to Human Resources to Customer Service. These apps can be tailored to each company’s specific needs and organizational structure. They are designed to reduce the amount of time that employees need to hunt around for answers, saving them time and money.

NOW has bucked the broader market trend, up 36% year-to-date. In fact, it hit brand-new 52-week highs on Thursday, then again Friday. The latest bout of strength is thanks in part to its first-quarter earnings report. The company actually thrived during the coronavirus outbreak during the first quarter, as the company helped other businesses better streamline their workflows to improve employee and customer experiences. In fact, ServiceNow has 933 total customers with more than $1 million in ACV, which represents a 30% year-over-year increase.

I recommended NOW back in July 2018, and now it’s sitting pretty with a 100% return on the Growth Investor Buy List. But as I said, it’s not the only direct play on cloud computing I recommended in Growth Investor. Another one in Growth Investor, which is in the life sciences industry, is currently up 139% since my recommendation in December 2018. (To get all the details on my Buy List, you can sign up here.)

With all that said, there are other “recession-proof” stocks I’m interested in. Specifically, I like the artificial intelligence (A.I.) space. The reality is that technology will continue to evolve, and A.I. will also be a big part of that evolution.

Of course, I’m not interested in just any artificial intelligence company. The A.I. stock I’m most excited about actually provides the technology for other major tech companies, like Microsoft and Google.

I call it the A.I. Master Key.

Not only does the company make the “brain” that all A.I. software needs to function, but it dominates its corner of the market in doing so.

So, it doesn’t really matter which competitor wins the A.I. race, because this company’s technology is used by all of them; therefore, its investors will profit off of all the A.I. success. For my Growth Investor subscribers, it’s already up 83% on the Buy List.

This company is set to report its quarterly earnings report in late May. I expect it to release strong results, which should drop kick and drive its shares higher. If you want to get in before the stock takes off, now is the perfect time to do so.

I’ll tell you everything you need to know, as well as my buy recommendation, in my special report for Growth Investor, The A.I. Master Key. It is still under my buy limit price – so you’ll want to sign up now; that way, you can get in while you can still do so cheaply. (And earn a dividend to boot!)

Click here for a free briefing on this A.I. innovation.