Tensions are running high these days, so I’d like to start this article off by reminding everyone that a 2% or 3% pullback is fine. It can be healthy, even, for the stock market to digest recent gains.

I’m personally pleased with what’s happening underneath the stock market’s surface. Here in earnings season, money isn’t leaving the market, in spite of the dire economic data on GDP and employment. Money is simply being reshuffled to companies with the best numbers – which is what always happens during earnings season.

Today, we saw money shuffle away from Amazon (AMZN). We took a closer look at AMZN and the other “FAANG” stocks in last Friday’s Market360, and now the company has reported its first-quarter results, plus second-quarter guidance. AMZN turned in revenues of $75.5 billion (versus $73.7 billion expected), a 26.5% gain year-over-year. Amazon Web Services was, as usual, a bright spot.

But AMZN earnings of $5.01 per share were down 29.3% year-over-year and well short of analyst expectations for $6.23 per share. CEO Jeff Bezos also announced that in the current quarter, when they’d normally expect to post $4 billion in operating profits, “Instead, we expect to spend the entirety of that $4 billion, and perhaps a bit more, on COVID-related expenses getting products to customers and keeping employees safe.”

All in all, Wall Street decided to take AMZN shares down about 7% today in response. For my part, I’d be interested in this dominant retailer if (and only if) it had better earnings down the road.

But now that the numbers are coming in from the “COVID-19 economy,” there’s a business that’s in much worse shape…and that’s the airline business.

Southwest Airlines (LUV) has been a +194% winner in my newsletter portfolios before. It’s made a name for itself with cheap flights, thanks to policies like no baggage fees and no assigned seats, which reduces boarding times. Its fundamentals weren’t quite up to par lately – but it’s not a company I’d have expected to suffer a 95% revenue decline. Yet with customers stuck at home, that’s exactly what its executives are projecting for May.

Already in the first quarter, Southwest sales of $4.2 billion were 18% lower than the year-ago quarter. And in the earnings column, there was a net loss of $0.15 per share. Airlines with international exposure are in the same boat – if not worse.

Analysts were least impressed with American Airlines. Revenue wise, the $8.5 billion figure missed expectations and was a 20% drop from last year. “Earnings” were also worse than expected: a $2.65 per share net loss versus $2.33. And the company was up to $6.8 billion in debt; in the next two months, it anticipates that will be up to $11 billion so the airline can keep paying its bills. One analyst at JP Morgan described this as “an increasingly perilous, knife’s edge approach in hoping to ride out the crisis.”

United Airlines, at least, managed to clear the bar. Analysts had expected an adjusted net loss of $2.85 per share, but United posted “only” a $2.57 per share net loss. Revenues were just $7.9 billion, a 17.7% year-over-year decline. That was less than analysts had anticipated, though ($8.3 billion).

Given the context of the coronavirus crisis, some analysts are arguing that the first-quarter numbers are “largely irrelevant.”

For one thing, a big bailout from the government is on the way. Similar to what European governments are doing for Air France-KLM (AFLYY), Lufthansa (DLAKY) and Norwegian Air Shuttle (NWARF), the U.S. government announced on April 14 that it will loan or grant $25 billion to 11 domestic airlines, including AAL, UAL and LUV. United said it expects to get $5 billion, American Airlines a similar amount, and Southwest nearly $14 billion.

The wheels of the government turn slowly, however. For example, many Americans are still waiting on their stimulus checks announced in March.

But, in the big picture, government bailouts don’t make any company a good investment! Only sales and earnings can do that, long-term.

And the reality is, these airlines don’t cut the mustard.

When you fire up the Portfolio Grader to see how these airline stocks rated prior to the first-quarter earnings announcements, you’ll see that all of them were already a “Sell”: 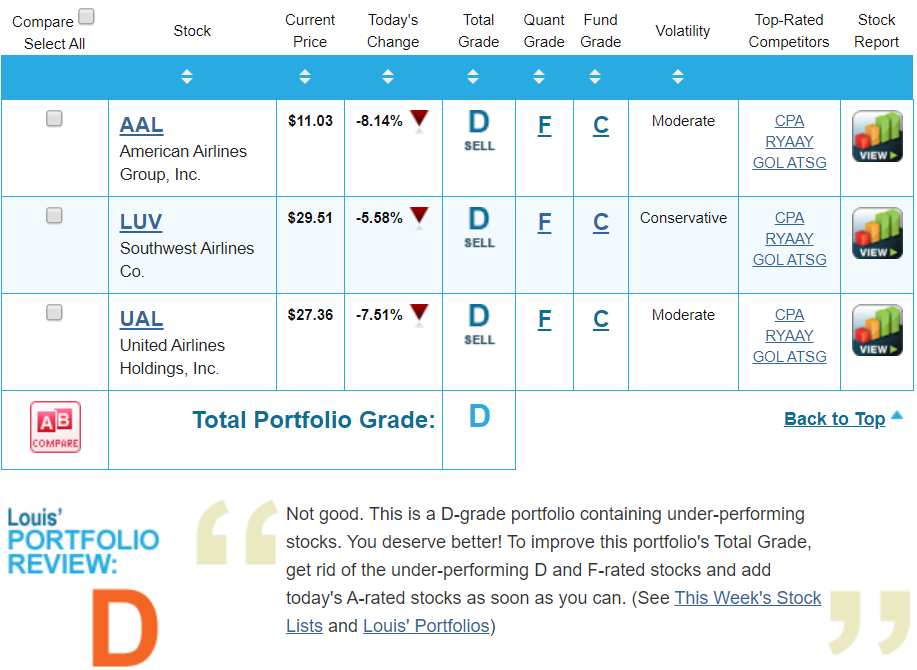 Before I’d recommend a stock in my Model Portfolio for Platinum Growth Club (or any of my other buy lists), I want to see a strong Quantitative Grade, which reflects buying pressure from big institutional money on Wall Street. In my experience, that’s the single biggest factor in a stock’s long-term success. And AAL, LUV and UAL all got an “F” there. But their fundamentals left something to be desired, too, as you’ll see above.

For its part, Delta Airlines (DAL), which had already reported its first-quarter loss on April 22, gets a “D” for both the Quantitative Grade and the Fundamental Grade.

So, before you’re tempted to “buy the dip” in airline stocks, please remember what I’ve shared just now.

The bottom line is, capital is rotating away from the low-quality stocks and pouring into higher-quality, fundamentally superior stocks. Many other stocks posted 5%, 10%, even 20% gains or more in today’s market sell-off.

As I always say, sooner or later, the crème de la crème rises to the top.

Today I’m adding three more “Strong Buys” to my Platinum Growth Club Model Portfolio. To make room, I cut two from the team that no longer meet that standard.

My Model Portfolio is all about smart diversification. I always want the best buys, and I’m willing to jettison even my favorite stocks when they don’t fit with the proven strategy I’ve relied on throughout my career.

So, if you’d like to see what makes the grade now, click here to try Platinum Growth Club and see my latest buy and sell recommendations.

In addition, you’ll have access to all the other services – Growth Investor, Breakthrough Stocks and Accelerated Profits, as well as the Power Portfolio 2020 my InvestorPlace colleague Matt McCall and I created. Sign on now to take part in our Open House and try Platinum Growth Club for 30 days, risk-free – at a steep discount.

Not only that, but your timing would be excellent for another reason. I recently published my newest special report, the Crisis Master Plan. So if you’re interested in smart diversification for a bear market, don’t wait. Go here for the details now.