Earnings are coming in hot and heavy these days. This was one of the most interesting first quarters I can remember, and we’ve got to look at these results a little differently in the context of the COVID-19 outbreaks.

We did just that in yesterday’s Market360 article, particularly with the healthcare industry (insurance versus hospitals). Now let’s perform this analysis on the “FAANG” stocks – Facebook (FB), Amazon (AMZN), Apple (AAPL), Netflix (NFLX) and Google (GOOGL) – which are just starting to report earnings this week and next.

Big Tech is playing very different roles as economies worldwide struggle to get out from under this pandemic. But there are some patterns I’d like to call your attention to, as I think they can be instructive for growth investors going forward.

First things first: Let’s run these stocks through my Portfolio Grader, for which I collect data on the nearly 5,000 stocks out there in my weekly scans each Saturday.

When I assess a company, I’m assessing it for the long term. So, I look not just at any single quarter – but the larger trend. With that in mind, here is how the FAANG stocks were looking ahead of their earnings reports: 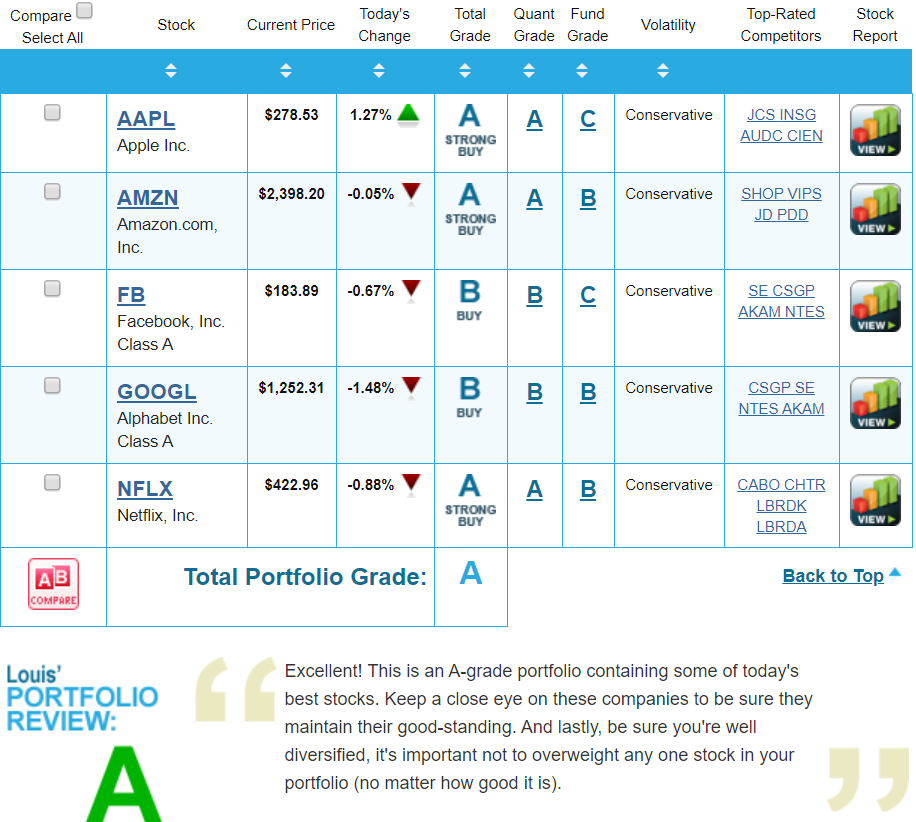 While there are some lackluster fundamentals in the mix, you’ll see that all of the FAANG stocks rated a “Buy” in my Portfolio Grader – to varying degrees.
And there are good reasons for that variation.

Where Does the Money Come From?

All of the FAANG stocks are “tech companies,” sure. But there are very different business models within the group. Apple, Amazon and Netflix have some key similarities, in that regard, that make them a “Strong Buy”…while Facebook and Google fall a little short of that distinction.

GOOGL and FB are suffering downgrades and sell-offs ahead of their earnings reports (on Tuesday the 28th and Wednesday the 29th, respectively), for much the same reason: their reliance on advertising revenue.

The downgrades might surprise a lot of people. With all of these stay-at-home orders, aren’t folks using Facebook and Google more than ever? And, indeed, Facebook did note that traffic is up – but this has not translated into greater ad revenues. As one industry group, the Interactive Advertising Bureau, puts it, “the media-marketing economy is on hold.” 98% of the members it recently surveyed said they expect less revenue – not just in the near term, but for the full-year 2020.

No one’s traveling; many businesses are simply closed; and consumers are spending – but moreso on essentials than the type of products and services typically advertised in splashy online campaigns.

But it’s also true for Google. Analysts view Google as also relying on the SMB segment, as well as travel & hospitality, for its advertising business. As such, while Google is still expected to turn in positive, growing earnings in the first quarter, the specific analyst estimate has been steadily declining over the last 60 days. Facebook is in the same boat.

The result is that both FB and GOOGL get a C for their Analyst Earnings Revision score in Portfolio Grader.

The other FAANG stocks, however, get either a B or even an A – and this bodes well for their ability to turn in an earnings surprise.

Here’s what you’ll notice about Apple, Amazon and Netflix: All of these are subscription revenue businesses, at this point.

Google has some sources of recurring revenues from its customers, namely its paid cloud-storage products and the Google Play store…and these have been a bright spot for the business. But these segments are much smaller. Google’s non-advertising businesses make up only about 17% of revenues.

In contrast, Netflix is all about collecting subscription dollars – and those subscriptions are growing by leaps and bounds.

In its first-quarter report on Tuesday, Netflix announced that it had added 15.8 million net new subscribers. That’s almost twice as many as analysts had expected! Below is a chart of FactSet data, showing what a steep jump that is, compared to recent quarters: 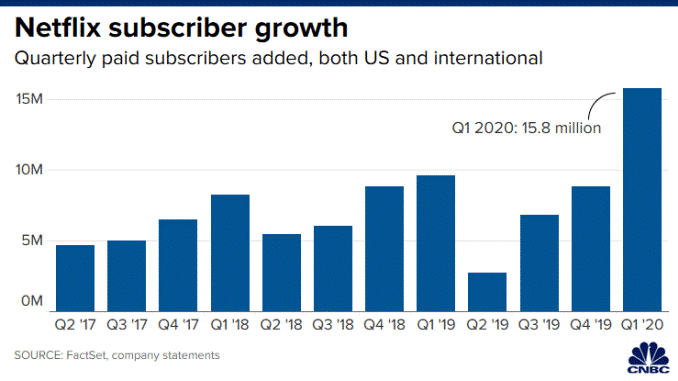 It’s no surprise that many new viewers would tune in to Netflix during the quarantine. It’s also no surprise that Netflix’s production of new content is at a standstill. Netflix hopes to make up for that by licensing content from existing TV series and films; time will tell. The silver lining is that Netflix’s cash position is stronger as a result of the halt in new production.

So, does this foreshadow good things for the subscription businesses of Apple and Amazon, too?

Well, most of the early headlines focused on the disruption to these companies’ supply chains and distribution, respectively. Apple’s big problem is the reliance on China to manufacture its products, including the almighty iPhone. Amazon has had to prioritize delivery of essential items, and two-day Prime shipping is a thing of the past as Amazon warehouses have seen COVID-19 outbreaks…and other workers fear they might be next.

From an investment perspective, please keep one thing in mind: The profit driver for both AAPL and AMZN these days is not the physical products these companies are best-known for. It’s Apple Services and Amazon Web Services.

The bottom line is, like many other big-name companies, Apple and Amazon are expected to report an earnings decline, year-over-year, and these estimates have been lowered during the COVID-19 crisis. But the downward revisions have not been nearly as bad as other peers.

That is why you’ll see the strong Analyst Earnings Revision scores I mentioned earlier. You’ll also notice a strong history of Earnings Surprises on both AMZN’s Report Card: 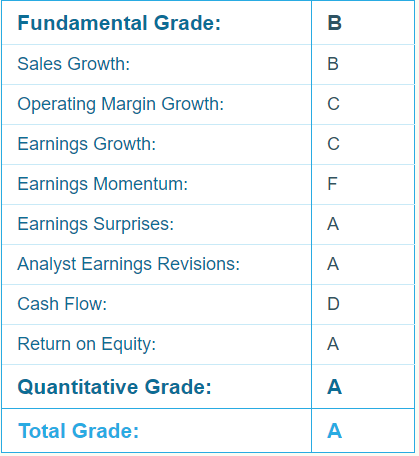 And you’ll also see it on AAPL’s Report Card, too: 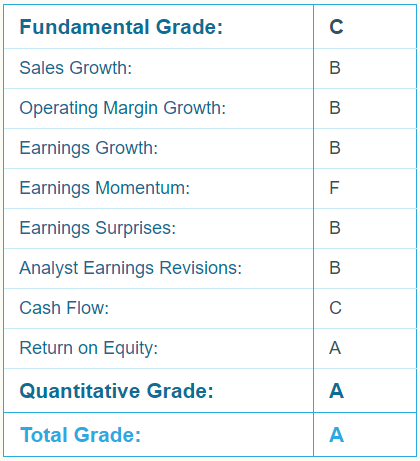 How Growth Investors Should Play This Long-Term

It’s hard to say how drastically any one company will be impacted by COVID-19, near-term.

But, sooner or later, economies will reopen, and the U.S. economy in particular can get back to the strong position it held before the pandemic.

So, my long-term thesis for tech investing remains much the same:

While individual tech companies like Apple, Amazon and Netflix have their positives…

I would rather invest in the one company that all of Big Tech needs, going forward.

This is the company I’ve nicknamed The A.I. Master Key. Specifically, it’s a hardware company that makes the “brain” all artificial intelligence (A.I.) software needs to function, spot patterns, and interpret data.

Netflix, for example, uses A.I. to recommend movies and TV shows. If you’ve used Zillow (Z), you’ve also used A.I., because that’s how it recommends houses and apartments. Even email spam filters use them, these days. It’s a lot more efficient and effective than waiting on a human to perform these tasks.

And this company’s Volta Chip is what makes it all possible.

I’ll tell you the basics you need to know, as well as my buy recommendation, in my special report for Growth Investor, The A.I. Master Key.

The stock is a “Strong Buy” in this volatile market. And, by the way, it also pays a dividend – which is attractive to investors large and small in this ultralow, even negative interest rate environment!