While there have been positive developments in the global economy, we’re not out of the woods yet. The coronavirus pandemic is still ravaging countries around the world. Hopefully all the government restrictions, social distancing measures, etc. will lower the death toll.

Here in the United States, the unemployment rate, which was at a 50-year low of 3.5% through February, is now closer to 10%. That could rise until the end of the national quarantine, which has been extended through the end of April.

One of its other effects is that the world is awash in crude oil.

With non-essential businesses closed, travel plans canceled, and stay-at-home orders in place, the demand for fuel just isn’t there.

Oil is a costly business, especially for exploration and production (E&P) companies. In boom times, they’re eager to pump more oil – which typically requires a lot of borrowing. The company then becomes highly leveraged at higher oil prices.

That’s a big problem at times like these…when oil prices crash to cheaper than $25/barrel.

And oil companies can’t pump their way out of it, since operations are so expensive…and, again, no one’s buying.

That’s a sharp reversal from early March, when the Saudis and the Russians embarked on a price war to see who could pump the most oil…gobble up the most market share…and survive the subsequent drop in crude-oil prices worldwide. Well, that sure turned out to be poorly timed – since neither of them can sell their oil to anyone these days.

At the end of the day, oil companies need demand to improve in order to recover from this.

In the meantime, companies need somewhere to put all this oil.

The fact is that the world is running out of crude-oil storage. I’ve had my eye on the situation these past couple of weeks. In the United States, we’d run out of storage in the next three to four months. Worldwide, the British bank Standard Chartered expects oil inventories to “exhaust spare storage in mid-May.”

At the end of the day, these companies’ future comes down to “logistics and access,” as Goldman Sachs put it in a March 30 report. “High-cost waterborne crude oil that can reach a ship (storage we have historically never run out of), are better positioned than landlocked pipeline crude oil sitting behind thousands of miles of pipe, like the crude oils in the U.S., Russia and Canada.”

In other words, there’s actually one beneficiary here: the crude-oil tankers that transport this oil by sea.

Given the storage situation on land, the “day rates” for these tanker companies are going up.

And, as a result, the oil tanker stocks are flashing huge buy signals in my Portfolio Grader.

Take a look at the Report Card for this one I’m recommending today for Breakthrough Stocks: 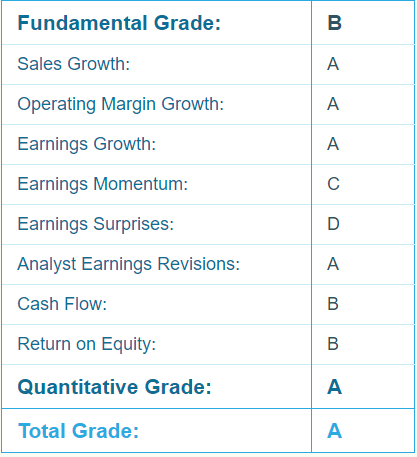 While the company has had negative Earnings Surprises in this volatile industry, it’s got top-notch Sales Growth, Operating Margin Growth and Earnings Growth, with strong Cash Flow to boot, and Wall Street analysts have been revising their expectations higher. That’s actually a reliable signal of a positive Earnings Surprise to come.

The full details are waiting for you in today’s April Issue of Breakthrough Stocks if you click here to give us a try now.

At that link, you can not only get access to my Breakthrough Stocks small-cap service – but all my other buy lists, too…and even my Platinum Growth Club Model Portfolio.

I want all growth investors to stick to the crème de la crème. That’s always true – but especially in this market. That’s what I have to offer you here.

Note: Our InvestorPlace offices and the customer-service phone lines are closed tomorrow, along with the stock exchanges, for the Good Friday market holiday. I’ll be back tomorrow and Saturday, however, with more Market360 articles.