These are crazy times for just about every asset class – but few compared to the rollercoaster ride the financial sector took this week. After all, banks have the most to gain from the Federal Reserve’s rate cuts…and the most to lose, without that intervention.

If there’s one group of financial stocks I like right now, it’s the mortgage companies – but I wouldn’t touch the big banks with a ten-foot pole. I’d like to make that very clear, so that you’re prepared next week, when the Fed most likely intervenes with another rate cut. So, here’s the deal:

Let’s keep in mind that this all started when investors turned to safe havens, like bonds, to protect their wealth. People wanted to hedge their bets against a global recession, now that the oil market is crashing and coronavirus outbreaks are popping up worldwide.

That buying pressure sent bond yields crashing; the 10-year Treasury yield went from 1% to 0.4% at Monday’s lows. When they fall that far, that fast, it disrupts the banking business. Remember, a bank works by paying interest on your deposits and collecting interest on your loans. Deposit rates are based on the Fed funds rate, while loan interest is based on longer durations, such as the 10-year Treasury.

Now, this time last month, it wasn’t a problem; bonds were yielding way more than the Fed funds rate. But unless the Fed intervenes, that would now invert…which would be a big blow to the banks.

However…the same risks are still out there that caused bond yields to collapse in the first place. That’s fine for high-quality dividend stocks, like the one I just recommended for Breakthrough Stocks. But until the chaos is contained, bank stocks won’t always trade as strongly as they did on Friday.

And if you’re a long-time reader, then you know I’m not a fan of big banks, anyway. I used to be a banking analyst with the Federal Reserve. So, I know all too much about the industry, including all the “dirt” behind big scandals involving banks like Wells Fargo (WFC). As a result, I remain leery of big bank stocks.

To me, one of the biggest winners of the key rate cuts are the mortgage lenders. This is the rare breed of financial stocks that will actually thrive. They don’t have to worry about deposit rates or Fed funds. They simply put out money for the cost of your home, and collect interest in return.

Plus, and most importantly, lower interest rates mean lower mortgage payments for customers. So, new home buyers and homeowners looking to refinance are eager to take advantage of the low rates right now.

In fact, refinancing applications were up 79% from last week and mortgage origination applications increased by 6%. This is a bright spot in the economy, which I discussed in last Friday’s Market 360. (You can read it here.)

While the average fixed-rate mortgage typically falls alongside interest rates, in the past day or so mortgage rates have ticked up. I’m not concerned, though. The increase is due to lenders struggling to keep up with applications. Lending Tree chief economist Tendayi Kapfidze noted that, “each employee is processing 2.5 to 3 times as many loans as they were a year ago…That really tells you the kind of jam lenders are in.”

Keep in mind that there were large layoffs in the lending industry back in 2018 and 2019, as they expected higher rates would decrease the demand for loans. So, lenders are increasing their interest rates to slow the demand and allow them to focus on the applications they already have.

Ultimately, with the increasing demand for mortgage loans I believe the winners from the rate cuts will be the mortgage companies. My Breakthrough Stocks subscribers are already well-positioned to benefit from this trend with my recommendation of PennyMac Financial Services (PFSI).

While the stock has pulled back amid the broader market selling, I don’t expect it to stay down for long. This is a rare stock that earnings a AAA-rating in my Portfolio Grader. It also offers a solid dividend yield. 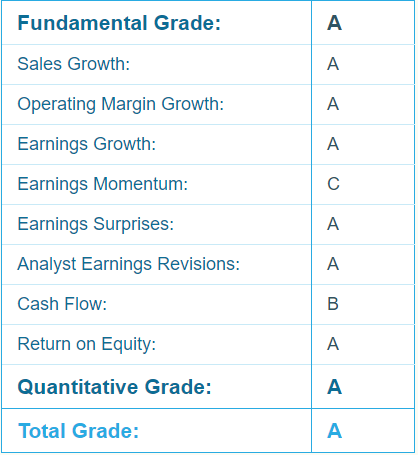 And assuming the Fed does, indeed, cut key interest rates by another 50 basis points next week, I expect PFSI to rebound nicely as the mortgage applications continue to pour in.

That said, PFSI isn’t the only AAA-rated stock on my list right now. In fact, just yesterday I recommended a brand-new stock in my Breakthrough Stocks service that’s in the business of making technology more energy-efficient. You can get all the details on Breakthrough Stocks and give us a try by going here.