The stock market certainly took to heart the saying for March: “In like a lion, out like a lamb!” After ending February on a sour note, with the S&P 500 and Dow down 11% and 12%, respectively, for the month, volatility remains out in full force. But just as the saying goes, I think March will end much more pleasantly than it started. And I’ll explain why.

First, let’s face the truth of the matter. There’s been a lot to scare the market recently: The coronavirus, slowing global economic growth, the presidential election and the Federal Reserve’s abrupt key interest rate cut.

There’s no denying that the coronavirus is spreading, and California declaring a State of Emergency yesterday only alarmed folks more. The coronavirus is impacting travel, but the U.S. economy continues to grow at a moderate rate. Germany, China and Japan remain on the verge of a recession, so the U.S. will remain the oasis around the world.

And while Joe Biden and Bernie Sanders are still vying to be the Democratic presidential nominee, it’s looking more likely that Joe Biden will win the nomination. So, some of the political uncertainty is lifting.

On the other hand, the Federal Reserve’s surprise decision on Monday to slash key interest rates by 50 basis points before its March Federal Open Market Committee (FOMC) meeting spooked investors, as many began to wonder why the Fed cut key interest rates and if the coronavirus is a bigger threat to the U.S. economy than previously thought. And now, the Fed will have to cut key interest rates again this month to uninvert the yield curve.

But here’s the good news: The 10-year Treasury hit a record low of 0.8990% today. This means that the Dow, which yields 3.1%, now yields triple the 10-year Treasury and almost double the 30-year Treasury. And whenever the stock market yields more than the Treasuries, it’s a screaming buy for investors.

That’s even before you consider the seasonal trends in March. Soon, fund managers will need to rebalance their stock holdings towards the top performers, “window dressing” their returns in time for the end of the quarter. This is good news for the high-quality stocks I focus my efforts on.

So where should you invest right now?

The Power of Solar Energy

Well, this is exactly what I discuss in tomorrow’s March Breakthrough Stocks Monthly Issue, where I’ll release my newest recommendation. I’ll give you a hint now, though: It’s in the solar space.

The reality is that solar energy is expected to vastly outpace the expansion of all other alternative energy sources over the next 30 years. According to the U.S. Department of Energy’s Energy Information Administration (EIA), solar power jumped nearly 15% year-over-year in 2019. Photovoltaic (PV) capacity increased 15.9%.

You see, in many parts of the world, like Australia and California, the electricity grid is no longer reliable during fire season, so more businesses and homeowners are now storing their electricity in battery backup systems. These battery backup systems are often installed with new solar panel systems. (I’ll talk in more detail about this trend in tomorrow’s Monthly Issue.)

We’ve already had incredible success with one solar stock, Enphase Energy, Inc. (ENPH). Since adding it to the Breakthrough Stocks Buy List in November 2019, the stock has soared more than 200%. And not even the broader market has kept ENPH down. While the S&P 500 and Dow lost 8% and 10%, respectively, in February, Enphase Energy gained 55%! 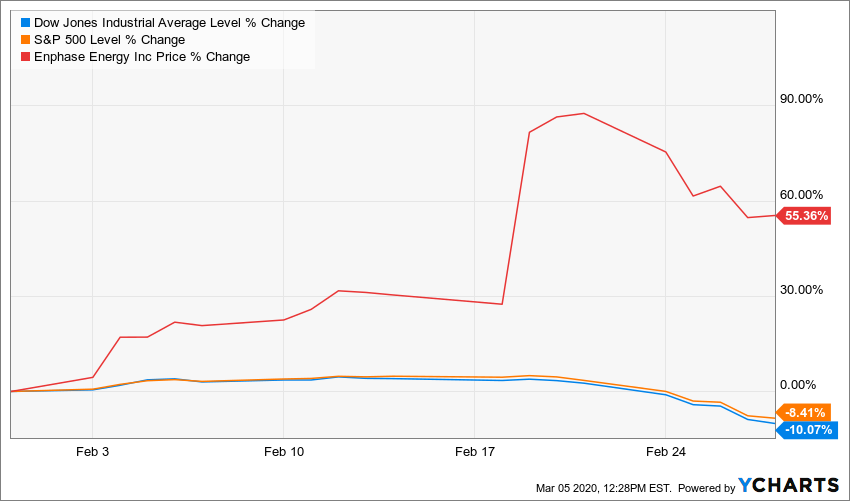 The success behind Enphase Energy is simple: strong earnings, fundamentals and buying pressure in a growing industry. In fact, for the fourth quarter, the company reported earnings of $0.39 per share on $210.03 million in revenue, or 875% annual earnings growth and 127.6% annual revenue growth. The consensus estimate called for earnings of $0.33 per share and revenue of $205.27 million, so ENPH posted an 18.2% earnings surprise and a 2.3% revenue surprise. It holds an A-rating in Portfolio Grader, too.

So, I am very excited to say today that I am seeing an exciting new opportunity in another A-rated solar stock. It has double-digit earnings and sales growth, it’s perfectly positioned to take advantage of the burgeoning solar energy trend, and it’s a “Strong Buy.”. For all the details, you can sign up for my Breakthrough Stocks service here. Now is the time to get in early, and I don’t want you to miss out.