When you think of all the coolest tech advancements in the works, from virtual reality (VR) to self-driving cars to artificial intelligence, I want you to think of one thing: NVIDIA (NVDA). And, specifically, NVIDIA’s signature technology: the graphic processing unit (GPU).

In a nutshell, every computer needs a processor to run all the mathematical calculations that make it “go.” However, most aren’t ideal for rendering the fancy graphics we’re used to in modern video games and movies. That’s what a GPU is specifically designed to do. It has thousands of “cores” on it, devoted to running these complex calculations, over and over, with incredible efficiency. And NVIDIA was the innovator back in 1999…and ever since.

As incredible as video-game graphics have become these days, there are a couple other key applications to be aware of, too, that have created even more demand for NVIDIA’s GPU chips – namely, cryptocurrency “mining” and machine learning, the new frontier of artificial intelligence.

Add it all up, and you’ve got a company that’s been consistently defying expectations.

Since my latest buy signal for NVDA in Growth Investor in May 2019, NVIDIA has “beat the Street” every single quarter. 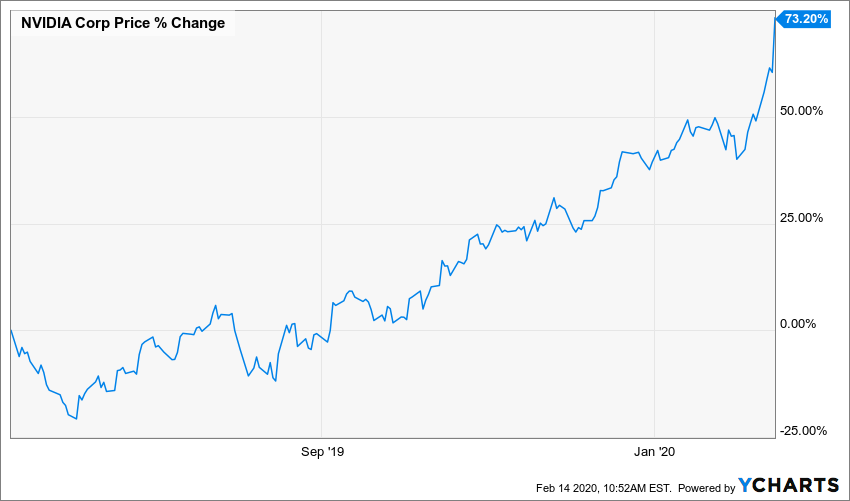 That’s not to say that everything’s perfect with NVDA. (Anyone who says they’ve got “the perfect stock” is probably trying to sell you a pack of baloney.) Looking ahead to next quarter, Nvidia cautions that results could be constrained by the effects of the COVID-19 coronavirus outbreak. In the full year 2019, revenues and earnings were both down slightly year-over-year, though still far afield of what analysts expected. And some of its business fundamentals, like operating margins, hadn’t been quite up to par in previous quarters. I’m pleased at the improvement this time around, and want to see that continue.

At the moment, one of the things I’m most excited about with NVIDIA is its involvement in deploying 5G – a giant leap forward in wireless internet speeds.

The best analogy I can think of with 5G is the “turbo button” on a supercar like the Porsche 918 Spyder. The normal driving mode is like what we’ve got now with 4G wireless. Seems pretty darn fast – until you press that little red button, and see what real speed is like.

And because NVIDIA has got those high-performing, efficient GPU chips, it’ll play a key role in the 5G buildout, in partnership with Ericsson (ERIC), the Swedish telecom equipment maker, and software developers like Red Hat and Microsoft (MSFT).

5G is rolling out now – and as it does, it’ll enable all sorts of new “smart” devices, as well as making our current ones faster. First, the telecom providers have to set up 5G New Radio networks.

We’ll take a look at radio access networks in tomorrow’s Market360; there are some misconceptions about the technology that I’d like to clear up.

In the meantime, there’s another stock I like even more for the 5G revolution, specifically.

Mobile providers like Verizon (VZ) and Sprint (S) need 5G to maintain their edge – and get people into new smartphone contracts. But the big profits will come from the companies that help create 5G.

One such company I like now is much lesser known than Verizon or Sprint, but has excellent growth prospects.

So, if that doesn’t sound familiar to you, I’d like to change that. This is the kind of stock that can help you profit from all the 5G infrastructure that’s popping up everywhere.

I’ve put together a complete investment report on it, called The King of 5G “Turbo Button” Technology. You can secure a copy by watching my new, free briefing on 5G and joining us at Growth Investor today.