For sports fans, this year’s Super Bowl between the San Francisco 49ers and the Kansas City Chiefs proved, yet again, that it’s never too late in the game to stage a comeback.

For investors, what was also striking was the constant emphasis on 5G in the commercials.

Like this one, from Verizon (VZ), called “The Amazing Things 5G Won’t Do”: 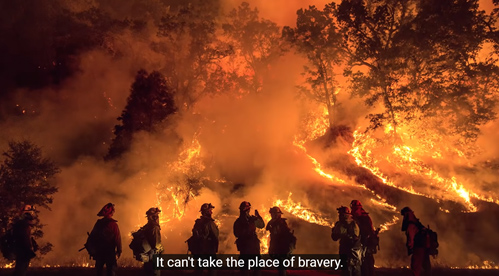 The commercial was mostly an ode to the courage and compassion of rescue workers. But it also noted how 5G will assist in their efforts, because the technologies it enables will “help firefighters see through smoke, connect ambulances with hospitals in real time” and “give rescuers new tools to locate survivors.”

Put simply, 5G is the fifth generation of wireless technology. It offers more data channels for increased speed, low latency and can connect to more devices simultaneously. It’s up to 1,000 times faster than what’s available today.

Think of it this way: 4G is having to drive to Blockbuster… pick out a movie… drive back. 5G is being able to watch that same movie on any streaming device – whether it be your smartphone, tablet or even your car – at the snap of your fingers.

With 5G, you’ll be able to download a two-hour movie in 3.6 seconds. With 4G, you’re looking at six minutes. And if you were still on 3G? That two-hour movie isn’t going to hit your screen for a whopping 26 hours!

These days, we’re asking a lot more from our devices, and at a certain point, 5G speeds are what makes it possible. 5G-capable smartphones are expected to increase 5 times from 10% in 2020 to 56% in 2023.

And with 5G comes higher-priced smartphones and cell phone plans. So, it’s no surprise that the major U.S. carriers – Verizon, Sprint, AT&T and T-Mobile – are racing to win the 5G game.

So, if the Super Bowl commercials and mainstream media coverage really brought this home for you…you might be wondering: Which stock makes the best 5G investment now?

Well, here’s how the major mobile providers stack up in my Portfolio Grader: 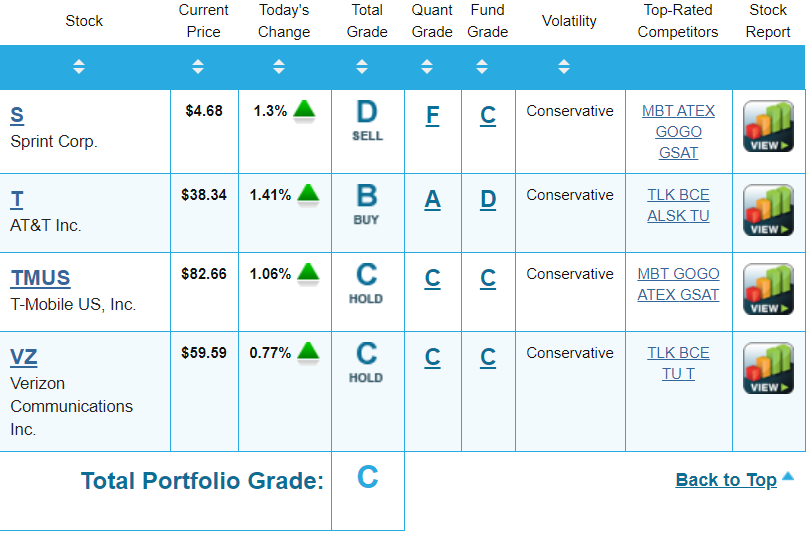 As you see above, Sprint (S) is an automatic “Sell” in my stock rating system. T-Mobile US (TMUS) and even Verizon are pretty lackluster as well.

Of the group, AT&T (T) is the best, especially in terms of its Quantitative Grade; its A-rating there indicates that its stock is in favor among big institutional investors on Wall Street. 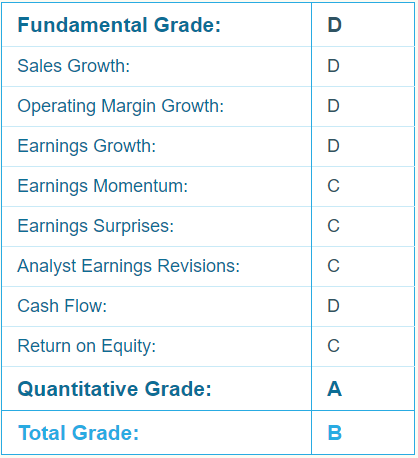 AT&T is a classic dividend stock (with a current 5.5% yield), which is always going to attract some people. But, as you see above, it’s not much of a growth play.

We’re on the cusp of major technological advances, many of which have been in the works already – just waiting for the lightning-fast speeds of 5G to make them possible. The global 5G infrastructure market is expected to grow from $784 million in 2019 to a little over $47 billion by 2027 – a 67.1% CAGR increase in just one market. So, unless you grab your slice of this massive growth, you’d be selling yourself short.

My 5G Infrastructure Stock is a Strong Buy Now

As amazing as 5G promises to be, it doesn’t get us anywhere without the right infrastructure in place. To revisit our earlier analogy, you wouldn’t have made it to Blockbuster at all if the roads were still being built. And you can’t stream Netflix (NFLX) with your smartphone plan unless there’s a cell tower nearby.

With 5G, those cell towers will be able to provide cable modem speeds (approximately 100mps) to wireless devices. Within two years, most cell phones will be 5G enabled and be able to wirelessly handle television streaming.

In fact, with the 5G infrastructure market set to grow at an annual rate of 67% over the next 10 years, the entire market will go from $780 million to nearly $48 billion.

Investors will also appreciate that the stock not only gets an A for its Quantitative Grade, but it has strong fundamentals, too – including B-rated Sales Growth and Operating Margin Growth, as well as an A for Earnings Growth!

Overall, this company is an A-rated “Strong Buy” in my Portfolio Grader system.

Click here to watch my new, free briefing on 5G and how to capitalize on this extraordinary opportunity.

When you do, you’ll see how to claim a free copy of my new investment report, The Netflix of 5G, which has full details on this company – and what makes it such a great buy now.

Note: If you’ve ever been blessed (as I have) to sit behind the wheel of a supercar like the Porsche 918 Spyder…you’ll have seen a red button on the steering wheel.

That’s what 5G will do for our devices, and the technology inside. 2020 is just beginning, and I can already tell, this is the tech sensation of the decade.