What a wild few days it’s been for Tesla (TSLA)!

The company reported blowout earnings on January 29, with non-GAAP earnings coming in at $2.14 per share. This was well above analysts’ estimates for $1.72. So, TSLA posted a 24.4% earnings surprise. Revenue of $7.38 billion was also strong, topping expectations for $7.02 billion.

The stock opened 9% higher the following morning and went on a significant run to new record highs – breaking above $700 this past Monday and then climbing as high as $968.99 just yesterday. The stock gained more than $200 in just two trading days!

Now, according to the talking media heads, everything is going perfectly for Tesla. After all, it delivered 112,000 vehicles during the fourth quarter, which is another record for the company. And for 2020, Elon Musk expects to “comfortably exceed 500,000 units.”

However, the financial media is leaving out a few key details that show otherwise. So, today, I’d like to share them with you.

First, even after investing billions in its own “Gigafactory,” Tesla is now having to import lithium batteries from CATL, LG Chem and Panasonic, which are based in China, South Korea and Japan, respectively. Second, after Panasonic lost its exclusive right to sell lithium batteries to Tesla, it announced a new venture with Toyota Motor (TM) to build lithium batteries at a new plant in Japan.

And third, there is an acute battery shortage that Elon Musk is clearly worried about. This is why he said that the Cybertruck “demand is just far more than we could reasonably make in the space of, I don’t know, three or four years, something like that.” Tesla’s competitors, like Audi, have already had to curtail production due to a LG Chem lithium battery shortage.

Even though European regulators are pushing electric vehicle (EV) sales, there is clearly a shortage of the batteries needed to make them “go.” Leading EV manufacturers, including Ford (F), General Motors (GM), Tesla and VW Group are all now relying on lithium batteries from LG Chem for their new plants. However, an acute battery shortage is hindering their ability to make EVs. As a result, Tesla’s sales are expected to slow dramatically unless it can “hog” more batteries from LG Chem and CATL at the potential expense of its EV competitors.

And yet, Tesla’s market cap is almost as much as Ford, GM and VW Group combined.

But here’s the problem: These automakers will be selling almost as many EVs as Tesla in 2021, due to Ford’s Mexican-made Mach E, GM’s Bolt, Audi’s e-tron models, the Porsche Taycan and VW’s e-Golf, which is the top seller in Europe.

By 2025, when Tesla’s Cybertruck is expected to be produced, it’s going to have to compete with GM’s electric Hummer and the Rivian, which is backed by Amazon (AMZN). There will also be some exciting electric lifestyle trucks from VW, like its Buggy and Microbus.

This is why I say the only way Tesla will have a fighting chance to survive this upcoming EV onslaught is to “hog” most of the lithium batteries. Even if this happens, there could still be problems, as it could trigger anti-trust action and extensive litigation. And since European manufacturers have to reduce their emissions to comply with strict European Union (EU) limits, some of them may choose to temporarily sell their EVs at an operating loss to meet fleet emission averages.

As a result, I worry about Tesla’s long-term competitiveness against experienced manufacturers. So, I am not sure that Tesla’s hot-selling Model 3 and Model Y vehicles can ensure its long-term success against the less expensive EV competitors.

This is why I firmly believe that the stock’s recent surge is due to short covering. Tesla’s much larger market cap looks way overblown, as you can see in the Bespoke chart below. Compared to the 10 largest global automakers, Tesla’s total revenues tally up to just 2%. 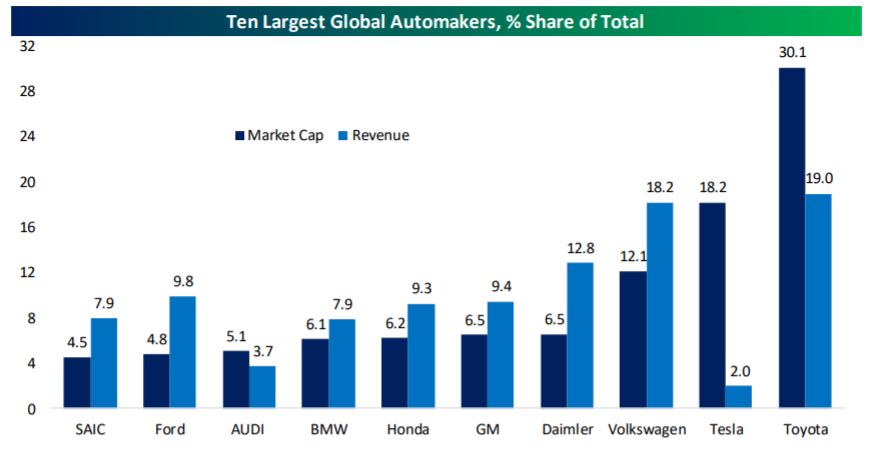 So, Tesla simply does not have the fundamentals to justify its high price tag. An overvalued stock – Tesla’s valuation is at almost 20 times sales – will eventually be knocked back down to earth.

And that’s exactly what we saw today. The stock fell as much as 20%, and traded in the $700 to $800 range…a far cry from where TSLA was a day ago. There are much better buys out there.

So if you own Tesla, should you sell it now?

While I believe what we’re seeing is a big stock bubble ready to be “pricked,” now is not the right time to sell Tesla.

Keep in mind that Tesla started making the Model Y vehicle at its Fremont plant in January, so this should help turn around its weak U.S. sales in the past two quarters. All of Tesla’s recent sales growth is due to the big EV push in both China and Europe.

You see, it’s not uncommon for a stock to propel higher after it joins a major index. It obtains a certain clout. The inclusion signals credibility to investors – and invites Wall Street analysts to perform “due diligence” on the stock. Their ratings, in turn, attract more media attention to the stock.

More importantly, when a stock joins an index, it also gets included in the related index funds.

Whether it’s a mutual fund, an exchange-traded fund (ETF), or other forms of institutional investments, index funds have become extremely popular in the past 10 years. And they’re part of a huge industry. U.S. mutual funds have about $19 trillion in assets under management— and ETFs have another $3.6 trillion. A major slice of that goes directly to S&P 500 funds.

This is exactly what happened with my Accelerated Profits stock, Paycom Software (PAYC). After it was announced that the stock was being added to the S&P 500, the stock surged about 7% in one day.

But unlike Tesla, Paycom has the staying power to continue moving higher over the long term. For one, it’s posted a string of strong earnings results, including another earnings beat today. In addition, the stock has seen strong buying pressure, as it continues to hold its A-rating for its Quantitative Grade in Portfolio Grader. Given the company’s solid fundamentals, earnings, sales growth and buying pressure, it’s a sure long-term winner.

And it certainly has been for my Accelerated Profits subscribers, as it’s up 294% on the Ultimate Growth Trades Buy List.

If you missed out on PAYC, don’t fret. There are still plenty of big gains to be made in other stocks. In fact, I released a new recommendation in Accelerated Profits just this morning. It’s a semiconductor company that saw year-over-year double-digit revenue and triple-digit earnings growth. It is AAA-rated, as it holds an A-rating for its Fundamental Grade, Quantitative Grade and Total Grade.

These picks all stem from the major discovery of my career: Through hundreds of hours of research, I found that an elite type of stock consistently outperformed the broad market, year in and year out. After extensive analysis, I isolated the eight key qualities that these super-performing stocks shared… and I developed a system for riding them.

Click here for the replay of the special event where I unveiled Project Mastermind. In it, I revealed the stock I rated number one based on results from Project Mastermind – ticker symbol and all. I’m really excited about the project, and I hate for anyone to miss out on under-the-radar gains, so be sure to watch now.