Did you know that the U.S. Treasury yield curve inverted again last week?

Most investors missed it, with Wall Street and much of the world laser-focused on the coronavirus outbreak. It was the first time that the yield curve inverted since October. And normally, the financial media would be practically screaming from the rooftops that this is a sure sign of a major recession ahead.

The numbers don’t support the bears’ argument here (as we’ll see in a moment). But I’d still like to address the causes of this yield-curve inversion – as they’ve been an overhang for stocks, too.

China is essentially on “lockdown” in an attempt to limit the spread of the Wuhan coronavirus. Last Wednesday, Morgan Stanley stated that the Wuhan coronavirus outbreak could negatively impact Chinese GDP growth by a full percentage point in the first quarter. That’s logical.

However, Morgan Stanley also noted that “the underlying drivers of the global recovery remain intact” and “growth should get back onto the recovery path once the effects of disruption fade.” So, fears about a global economic slowdown were a bit overblown. And the situation in mainland China has very little to do with most of the growth stocks I’m recommending now.

Another cause for the inverted yield curve was Brexit – which finally happened on Friday, Jan. 31 – and a lack of confidence in central banks. The Bank of England (BOE) nixed calls for a rate cut, as did the U.S. Federal Reserve, which voted unanimously to keep key interest rates steady between 1.5% and 1.75%, citing weak global growth and muted inflation.

Bond yields then collapsed, with the 10-year Treasury dropping to 1.51% on Friday – and it remains at its lowest level since early October.

Now, should we continue to see big swings in the Treasury yield, don’t be surprised if the fearmongering media hits the panic button again.

As I’ve been saying, though, I’m not going to be scared out of high-quality stocks at this time of year – my favorite earnings cycle. But let’s break down the yield curve and its implications.

While 2020 started out firing on all cylinders, it’s done a quick about-face in the past week. The stock market fell sharply again on Friday, with the Dow at one point sinking more than 500 points.

Fears of the coronavirus seem to be the main culprit behind the recent weakness, as investors tend to “act first” and “think later.” And while this issue is certainly one to keep an eye on, as I mentioned on Tuesday, the stock market has bounced back after every major epidemic in recent years, and I expect this to be no different.

Basically, the yield curve is a visualization of the interest rates you get from bonds of different durations, from one month up to 30 years.

If everything always worked out logically, the longer-term bonds would yield way more than the shorter-term bonds. After all, you’re tying up your money for longer, so you’d expect to earn a higher rate to help offset any risks that may develop while your money is in that bond.

Well, just like stocks, a bond’s yield is a function of both the payout and the price – which fluctuates in the open market. So, in a volatile market, weird things can happen to the yield curve.

Below you’ll see a more normal Treasury yield curve from May 2018 (the gray line), in which yields gradually get larger for longer-term vs. shorter-term Treasury bonds.

However, in the current yield curve (red line), the short-term bonds actually yield MORE than some of the longer-term bonds, including the 10-year: 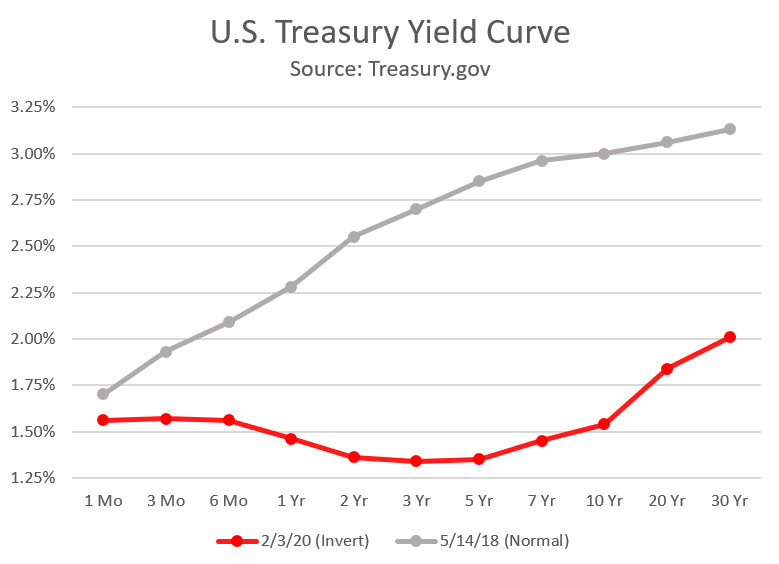 Now again, if you look at this logically, the implications are pretty cut and dry. If short-term yields are higher, it’s because bond investors fled from short-term to long-term Treasuries – so they must not be feeling too confident near term.

Also, the banks don’t love this scenario. Remember, a bank works by paying interest on your deposits and collecting interest on your loans. Those loans are based on bonds with longer durations – so when the yield curve inverts, it hurts the big banks’ profitability.

Add it all up and, economists say, it’s a bad omen.

But here’s the deal: Based on recent economic data, the U.S. is not on the verge of falling into a recession. Last week, the Commerce Department reported that fourth-quarter U.S. GDP came in at a 2.1% annual pace, with consumer spending growing at a 1.8% annual pace. Full-year GDP is now estimated to have grown at a 2.3% annual pace in 2019.

The reality is that the U.S. remains an oasis amidst all the scary headlines. As a result, there’s a massive capital flight here. Our bonds at least yield more than Britain’s, Europe’s and Japan’s – the latter two are negative, at this point!

And, in turn, the S&P 500 yields more than Treasuries.

In this environment, yield-hungry investors will continue to flock to the stock market. The “smart money” will seek out companies with strong sales, even stronger earnings and positive guidance. And that’s all great news for the fundamentally superior stocks I recommend.

Note: Any smart investor knows the need for income. It really helps smooth over the “rough patches” in a portfolio over time. But yield isn’t everything; you also need growth.

And when you find a high-quality stock in a powerful bull market like this one, you can enjoy a year’s worth of growth in half the time (or less!) That’s just what we’re doing at Accelerated Profits now with Project Mastermind.

Earnings season is getting hot and heavy now, so this is the time to jump in before these stocks take off. You can sign up here for more details. Don’t miss out when these stocks make their next leg higher.