Since the grounding of The Boeing Company’s (BA) 737 MAX planes last March, it’s been nothing but bad news for the company. Its former CEO, Dennis A. Muilenburg, was ousted last month; it’s been plagued by leaks that indicate that the planes were poorly made; and company management was forced to shut down production of the 737 MAX planes, the Boeing’s most-popular product line.

While Boeing initially expected to have its 737 MAX planes up and running again by March, those plans have been pushed back to mid-year.

And now, the company is considering further cutting the production of its 787 Dreamliners. At first, Boeing planned on going from 14 aircraft to 12 aircraft per month. However, that number might be slashed to 10 aircraft per month, likely due to slowing demand in China, which has been a big buyer of the Dreamliners, and recently stopped ordering the aircraft. Not surprisingly, these issues have caused a major hit to Boeing’s bottom line.

Consider this: For the fourth quarter of 2018, the company reported stunning results. Boeing’s earnings of $5.48 per share smashed analysts’ estimates for earnings of $4.57. So, Boeing reported a 19.90% earnings surprise. Revenue was also solid, coming in at $28.3 billion and $1 billion above consensus.

In addition, the company’s annual revenue broke records. It brought in $101.1 billion in revenue – the first time it’s ever broken above $100 billion. Boeing also delivered 806 aircraft – another record – and expected to break that record with 895 to 905 in 2019.

And now? Analysts are calling for a 73.2% year-over-year decline to earnings of just $1.47 per share. Revenue is also supposed to fall 23.5% year-over-year to $21.67 billion – a far cry from the strong performance Boeing delivered a year ago. Analysts have also revised their earnings estimates down over the past three months, which indicates that an earnings miss is possible. Boeing’s earnings will be released next Wednesday, January 29, so we’ll know for sure then.

Interestingly, despite these issues, Boeing is not cutting its $2.05 dividend. However, that’s not enough to get me interested in buying the stock. And if you’ve been following my Portfolio Grader, then you’ve known to stay away from it, too: 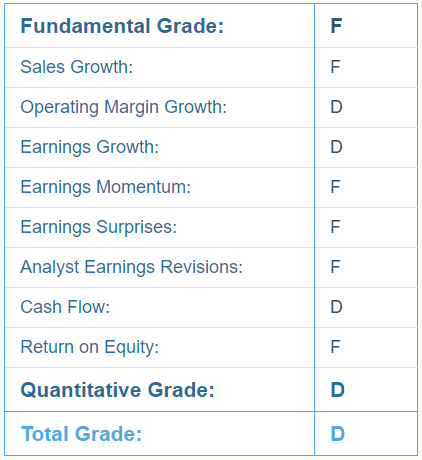 As you can see above, everything from the company’s Sales Growth to Return on Equity receives failing marks. So, it’s no surprise that the stock earnings an F-rating for its Fundamental Grade and D-rating for its Quantitative Grade. When you blend those two grades together, BA has a D-rating for its Total Grade, making it a Sell.

While Boeing is clearly a stock to stay away from right now, there are several stocks I do like that offer significant growth. In fact, on my Accelerated Profits Buy List, I have 35 fantastic stocks, several of which offer dividend yields. So, you can get growth and income in one stock!

I’m especially excited to see how these stocks perform during earnings season. My Accelerated Profits stocks have superior forecasted sales of 30.9% and earnings of 115.1%. Our companies also have a history of topping analysts’ earnings estimates (30.8%).

So far, my Accelerated Profits stocks have started this earnings season strong out of the gate – four out of four of the companies that have reported have topped earnings estimates, with one stock smashing earnings expectations by a whopping 71.4%.

I expect to continue to see wave-after-wave of positive earnings and sales propel the stocks on my Accelerated Profits Buy List substantially higher in the next few weeks.

Earnings season will be getting hot and heavy for my Accelerated Profits companies next week, so now is the time to jump in before these stocks surge on their quarterly reports. You can sign up here for all the details. You don’t want to miss out before these stocks make their next leg higher.