A stock held in several of my services had a major day Wednesday. It’s a stock most folks probably never heard of.

But word came down that the stock was being called up to the “big leagues”: The stock will now be included in the S&P 500 index, replacing WellCare, which just got bought out by Centene (CNC).

When a company joins the S&P 500 (or the Dow…or the Russell 2000), it obtains a certain clout. The inclusion signals credibility to investors – and invites Wall Street analysts to perform “due diligence” on the stock. Their ratings, in turn, attract more media attention to the stock.

Most importantly, when a stock joins an index, it also gets included in the related index funds.

Whether it’s a mutual fund, an exchange-traded fund (ETF), or other forms of institutional investments, index funds have become extremely popular in the past 10 years. And they’re part of a huge industry. U.S. mutual funds have about $19 trillion in assets under management… and ETFs have another $3.6 trillion. A major slice of that goes directly to S&P 500 funds.

Big money on Wall Street is what moves the market. It’s the deciding factor in whether stocks succeed or fail – because it provides the momentum for share prices to move over time.

That’s why Wednesday was such a big day for Paycom Software (PAYC).

PAYC has a great business model: It helps clients streamline their human resources departments with cloud-based systems for everything in the employment lifecycle. Recruitment, hiring, retirement, payroll…these things can be quite a headache, as we all know, when they’re not done efficiently. No wonder Paycom reported 31% revenue growth and 34% earnings growth, year-over-year, in its latest results.

In response to the call up to the S&P 500, PAYC shares jumped 7% to a new 52-week high. Investors must have thought it was their lucky day. But there’s more to it than luck. Inclusion in a major index is a big deal for a stock, long-term.

In my stock-picking system, I have a proprietary formula for measuring this, which gets reflected in the stock’s Quantitative Score. Even before PAYC joins the S&P 500, it already gets top marks there: 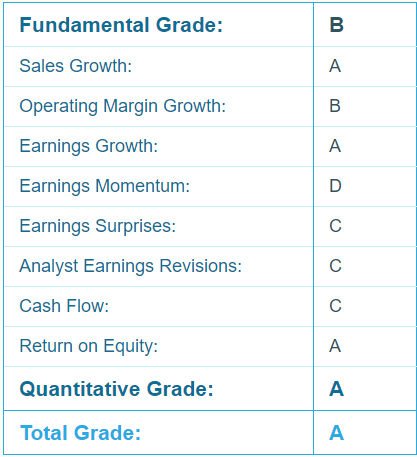 As you see there, Paycom Software also has strong fundamentals. While its earnings scores aren’t entirely perfect, PAYC does get an “A” for Earnings Growth, as well as Sales Growth.

In that vein, there’s also another catalyst on the horizon that could produce further gains: Paycom’s fourth-quarter and full year 2019 earnings report. The results are due out on February 5 after the close. Paycom is expecting revenues to grow 29%-30%, year-over-year. That would be nicely higher than analysts’ previous estimates.

Already, PAYC is up about 288% for us at Accelerated Profits, where it’s on our list of Ultimate Growth Trades. All in all, we’ve got 35 of them – and some are particularly great buys now.

This week in our Weekly Profit Guide, I highlighted two Chinese stocks, one of which just posted nearly 150% earnings growth!

And as part of our latest venture for Accelerated Profits– Project Mastermind – I named my number-one stock pick for a year’s worth of gains in half the time (or less!)

It all stems from the major discovery of my career: Through hundreds of hours of research, I found that an elite type of stock consistently outperformed the broad market, year in and year out. After extensive analysis, I isolated the eight key qualities that these super-performing stocks shared… and I developed a system for riding them.

Click here for the replay of the special event where I unveiled Project Mastermind. In it, I revealed the stock I rated number one based on results from Project Mastermind – ticker symbol and all. I’m really excited about the project, and I hate for anyone to miss out on under-the-radar gains, so be sure to watch now.