Well, the mainstream media must be loving all this negativity lately. Between the impeachment trial and the new respiratory virus out of China, coronavirus, it must be great for their ratings…

However, the big picture is much different. Yesterday’s new highs in the S&P 500 have plenty of support in terms of the economic data.

For one thing, we just had a record-breaking holiday shopping season. The last Saturday before Christmas set a record as the biggest shopping day ever, with $34.4 billion in sales!

For all of December, U.S. retail sales (excluding cars and gasoline) gained 0.5% — the highest rate since summertime. Interestingly, that figure includes weak numbers from department stores like Kohl’s (KSS) and Macy’s (M) – and even from Target (TGT) – while companies like Amazon (AMZN) and Lululemon Athletica (LULU) continue to thrive. This is exactly why it pays to be highly selective with your investments.

At this point, consumer spending supports about 70% of the U.S. economy. So, this data is good news for all of us.

Traditionally, we figure that consumers spend when they are feeling more confident – and also, of course, when they are being paid more. That seems to be the case now.

Take a look at this summary of jobs data from analysts at LPL Research. Compared to the rest of the economic cycle, wage growth was the highest in 2018…and then again in 2019:

Meanwhile, unemployment reached its lowest level as well. That seems likely to continue in 2020; just last week, weekly jobless claims fell to 204,000. That was a surprising 10,000 drop, whereas analysts had expected a slight increase.

The U.S. housing market is looking good as well. Demand for homes had started to outpace supply, so now housing starts jumped about 17% in December. That was the most we’ve had since the real estate boom of the mid-2000s, 13 years ago!

That’s all encouraging. Now, as investors, what’s the best way to take advantage?

Clearly, housing is one to watch, which is why I chose PennyMac Financial Services (PFSI) as my entry in the InvestorPlace Best Stocks for 2020 contest.

But I will say that I believe we’re in more of a “special situation market,” and less of a “sector market.”

As any market climbs higher, it chases fewer and fewer stocks. You can think of the market like a funnel. The market will no longer be chasing a lot of the hot sectors. Instead, it will have a more narrow focus.

Take the energy and biotech sectors, for example.

The S&P 500, which has grown to be dominated by tech behemoths like Microsoft (MSFT), Apple (AAPL), Amazon (AMZN), and Facebook (FB), returned 61% in the past five years.

The chart below shows us how the energy sector did in comparison to the S&P 500 since January 2015. 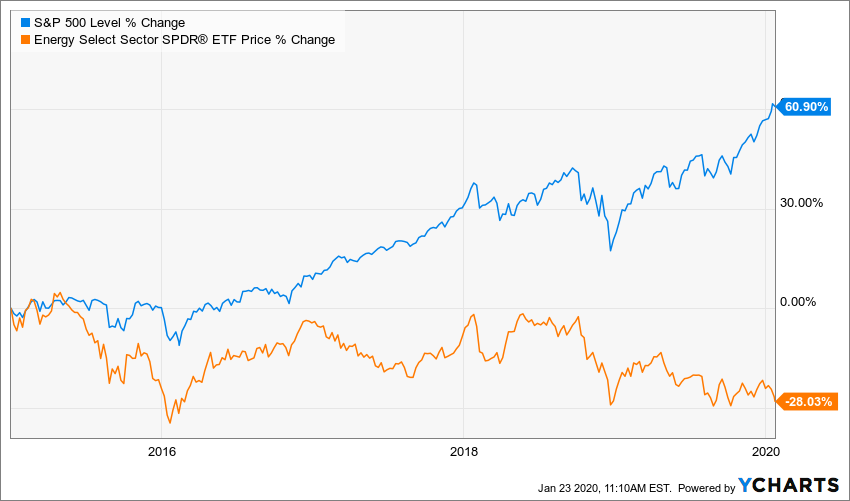 Even with the bump in November, and now the tensions between the United States and Iran, the energy sector’s performance still isn’t very pretty!

From July 2010 to July 2015, the S&P 500 biotech index soared more than 400%. But after that, folks mostly steered clear of the sector for years. In the 2016 presidential election, Hillary Clinton started talking about drug pricing, and now Senator Bernie Sanders has his “Medicare for All” bill on the table.

But then in the fall, biotech stocks showed new signs of life.

Several of the world’s largest biotech juggernauts are snapping up smaller firms that specialize in treatments for cancer and autoimmune disorders. The major players in this industry don’t want to miss out on what’s coming down the pike, especially when many of them rely on profits from older drug patents that are set to expire.

My InvestorPlace colleague, Matt McCall, and I both agree that biotech’s resurgence could have a big impact this year. And we’re bullish for 2020 in general. We’ve teamed up to bring you our Power Portfolio 2020, for which we just released two new picks yesterday.

All in all, we’ve agreed on 12 stocks for our joint project. We don’t want you to do “average” next year, we want you to bring in extraordinary returns, and we believe this is the way to do it.

If you’re interested in being a part of this exciting wealth-building project, please click here. While watching our free webinar, the Early Warning Summit, you’ll get the chance to sign up for full access to our 12 hand-picked recommendations.

Next Friday, we’re releasing our first-ever Monthly Issue, and we’ll share our latest thoughts on these stocks. Sign up now for all the details so you don’t miss out!