Let’s get to the bottom of that today. Because Lululemon is not part of any of the major trends that are pushing other stocks like American Tower Corp (AMT), Fortinet (FTNT) and Paycom Software (PAYC) to new highs: 5G… artificial intelligence (A.I.)… or any other technological breakthrough. Lululemon is a yoga pants store.

Here’s what Lululemon does have going for it: A hot brand at a time when the U.S. consumer is more confident and more willing to spend.

This holiday season was one for the record books. First, shoppers spent $31.2 billion on Black Friday, then another $19.1 billion on Cyber Monday. Then December 21, or Super Saturday, set a record as the biggest shopping day ever, with $34.4 billion in sales!

LULU has been working hard to get its fair share of sales on all those big shopping days. The company invested in its e-commerce business, including a mobile app, and in expanding its loyalty program. It’s also gone after the menswear market – not just with yoga products, but also mass sports distribution. As such, Lululemon has been able to capture market share from big-name athletic apparel companies like Nike, Inc. (NKE) and Under Armour, Inc. (UA).

Clearly, this put Lululemon in high demand this holiday season: Yesterday, the company announced that it’s anticipating fourth-quarter revenues of $1.37 billion to $1.38 billion. That would be a nice 17% to 18% increase from the year-ago quarter. The profit picture is even better! LULU anticipates $2.22 to $2.25 earnings per share, which would be a 27% to 29% gain, year-over-year.

That’s the kind of growth that makes stocks a must-have in my stock-picking system.

And it’s no fluke. In the last major season for retailers – summer and back-to-school – other companies floundered. Forward guidance fell short, with the U.S.-China trade war pegged as the culprit. In contrast, when Lululemon released its early-September results, the company beat Wall Street expectations on comparable sales, net revenue AND earnings per share.

If you’re wondering why a retailer focused on yoga clothes has been such a top performer, well, there’s much more to the story than that. It’s an entire lifestyle known as “athleisure.”

Lululemon has been the vanguard of this athleisure trend for over two decades. Founded in 1998, LULU started as a design studio by day and yoga studio at night in Vancouver, Canada. And that became the company’s first standalone store in 2000.

Initially, LULU grew by word of mouth, pop-up shops in yoga studios and brand ambassadors. Now, the company has more than 400 stores across four continents for its high-quality, comfortable products.

The stores are beautiful and equally stylish, as you can see with its Chicago mega-store below. 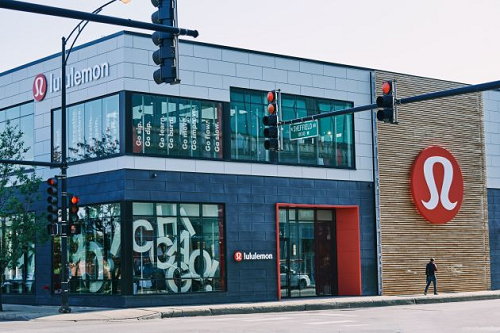 In addition to the clothes, shoppers can linger for coffee, smoothies, even yoga classes and meditation. Or, for workout buffs on the go, Lululemon has also expanded in-store pickup of online purchases to nearly all North American locations.

Now for those of us who aren’t yoga enthusiasts…how are we to spot these opportunities?

Well, it’s easy – if you know where to look.

LULU became my pick for last year’s InvestorPlace Best Stocks contest because it was a standout in my Portfolio Grader stock scanner. Take a look at LULU’s Report Card below: 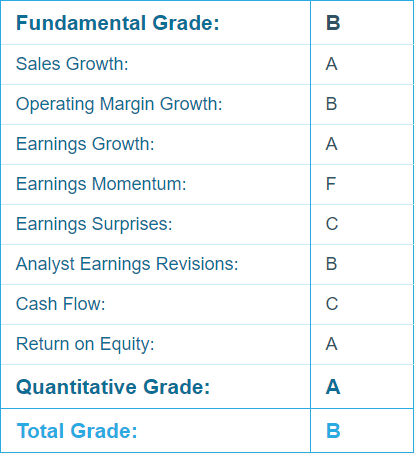 Overall, those are some very healthy fundamentals, with top-notch Sales Growth and Earnings Growth.

Best of all, LULU gets top marks for its Quantitative Grade, too. This is my proprietary measure of institutional money flow – and, in my experience, it’s the single most important factor in a stock’s long-term success. Basically, even the strongest company needs to attract attention from big money on Wall Street. And when it does, the gains for investors can be incredibly powerful.

But, as Lululemon proves, you can find these opportunities in any industry…even ones you may not otherwise think to look for market-beating gains.

That’s why I do my best to remove human bias from the equation entirely. Instead, I’ve got a computer doing all the work. And lately, the growth plays it’s finding are truly extraordinary.

LULU is undoubtedly a great stock, with its 90%+ gain in just over a year. Now we’re deploying my Portfolio Grader system for even better gains in less time with Project Mastermind.

It all stems from the major discovery of my career: Through hundreds of hours of research, I found that an elite type of stock consistently outperformed the broad market, year in and year out. After extensive analysis, I isolated the eight key qualities that these super-performing stocks shared… and I developed a system for riding them.

Click here for the reply of the special event where I unveiled Project Mastermind. In it, I revealed the stock I rated number one based on results from Project Mastermind – ticker symbol and all. I’m really excited about the project, and I hate for anyone to miss out on under-the-radar gains, so be sure to watch now.

Note: This recommendation is flashing all the same signals as the other winners I’ve mentioned here. So, I’m confident in saying – this stock has the potential to double your money or more over the next three months.

Between the glimpse at my system and potential access to its number-one stock pick, you’re not going to want to miss out on what I’ve shared in my Project Mastermind presentation.