I hate to say “I told you so.” But when it comes to the “permabears” on TV who are more worried about their own fame and ratings than about helping investors…I don’t mind pointing out where they fall short.

Well, the naysayers certainly got it wrong in 2019. Stocks simply refused to get hung up on Brexit, impeachment, or any other bearish headline for long. Ultimately, the S&P 500 gained nearly 29%, the Dow gained 22.3% and the Russell 2000 tacked on a 23.7% gain. This was one of the market’s best years ever!

Now, I do have to give the bears one thing: The side effect of this was that bubbles formed under several flagship stocks, including Tesla (TSLA) and Apple (AAPL). I alluded to this in yesterday’s Market360 as a situation to watch this year.

Today I’d like to take a closer look at the poster stock for overvaluation, Tesla. Its troubles are a case study of the factors I usually look for in an investment – and the warning signs to heed in crafting the right portfolio for 2020.

Is TSLA Worth It?

As I write this, TSLA trades at more than 81 times forecasted 2020 earnings.

That’s not unusual for growth stocks – at least, for a time. But the problem with Tesla is that, when you look at its actual results, it doesn’t always live up to the “growth” moniker. Certainly not to the degree that my stock system would need to see.

In the third quarter, Tesla’s sales in the U.S. dropped 39%, while Model 3 sales surged internationally. The company has also missed analysts’ earnings estimates in three of the past four quarters. So, if Tesla reveals another earnings miss or provides poor guidance, the bubble could be “pricked” and the stock could be hit hard.

Morale is already low at Tesla’s Reno battery plant, where I know several workers. The company’s Gigafactory partner, Panasonic (PCRFY), has yet to make any money, so Panasonic has stopped expansion at the Reno Gigafactory as U.S. demand has ebbed. This essentially means that Tesla’s claim to be the most efficient manufacturer of lithium batteries via its Gigafactory in Reno has failed.

As a result, Tesla no longer has a competitive advantage. The company is now buying batteries from LG Chem for its Gigafactory in Shanghai, China. LG Chem also supplies Volkswagen Group’s (VWAGY) big electric vehicle push. And Volkswagen Group will likely surpass Tesla in global electric vehicle sales in the next few years, especially considering that the company will have up to 25 electric models from Audi (AUDVF), Porsche and VW.

Now, I should add that Tesla’s Model 3 and upcoming Model Y are expected to have strong international sales. But these two models will eventually be overwhelmed by all the electric vehicle competition from, as well as Jaguar, Mercedes-Benz and Volvo. As a result, I expect Tesla’s bubble to be “pricked” when its international sales peak, likely in the next couple of years.

This is the context for TSLA’s uninspiring Report Card in my Portfolio Grader. For all the reasons I mentioned above, the company just doesn’t measure up in terms of its fundamentals: 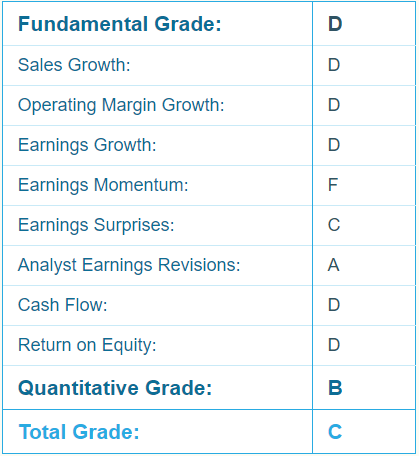 Tesla falls down on all of its growth factors. The one bright spot here is a strong grade for Analyst Earnings Revisions – but given its tendency to miss these expectations in the actual report, it’s just not enough to recommend the stock at this time.

And while its Quantitative Grade is a solid B, the increased buying pressure is because it’s such a talked-up name, so I’m not impressed here, either.

Not when there are much better choices out there.

To name just one example, one of my Top 5 Stocks for January in Breakthrough Stocks gets an “A” for Analyst Earnings Revisions and has a solid history of positive earnings surprises.

The stock, Enphase (ENPH), also gets the top grade for Sales Growth. And it looks poised for a repeat performance in the fourth quarter. Specifically, analysts are looking for 122% revenue growth, year-over-year. Even better, the company is expected to post 725% earnings growth later this month!

That’s all the more impressive when you consider that Enphase is operating in an industry that others have found challenging: solar. But this firm makes a component that’s vital to all solar panels (whether for home or business).

For more than a decade, Enphase has shipped its components all over the world. And in just two months since I recommended ENPH at Breakthrough Stocks, our position is already up 67%!

Looking ahead, analysts have upped earnings forecasts on ENPH in the past three months, so a fourth-straight earnings surprise is likely. In other words, now is the time to check out Breakthrough Stocks and see what this can do for your portfolio.

I’m releasing my January issue of Breakthrough Stocks today with the full list of Top 5 Stocks (plus a new buy!) So, there’s still time for newcomers to get in on the action. Go here for a free briefing on our strategy – and let’s get started.