Many companies are vying to dominate the artificial intelligence (A.I.) space. The market is worth billions, and it’s only going to keep getting bigger. According to Grand View Research, by 2025 the global A.I. market is estimated to hit a stunning $390.9 billion! So, it’s no surprise that tech companies want a piece of the pie, and as big a piece as they can get.

Not surprisingly, two leaders of the A.I. sector are ones you’re already probably well-acquainted with: Google (GOOGL) and Microsoft (MSFT). But neither are the winners. No, that title now goes to Baidu (BIDU), known as the “Google of China,” which is beating its competitors in a big way.

On December 11, Baidu’s A.I. machine, Ernie, received top marks and broke records during the General Language Understanding Evaluation (GLUE) test. Put simply, this test determines how well an A.I. machine can understand human language.  Ernie scored a 90.1 out of 100 – the first A.I. system to score above 90 – and beat out Microsoft’s score of 89.9 and Google’s score of 89.7.

Since the results were released, the stock has made a nice move higher – running up as much as 21%. Given the positive news and positive trading action, does this make Baidu a good A.I. investment?

My Portfolio Grader says no. In fact, it gives BIDU a solid F for its Total Grade, making this stock a Strong Sell. 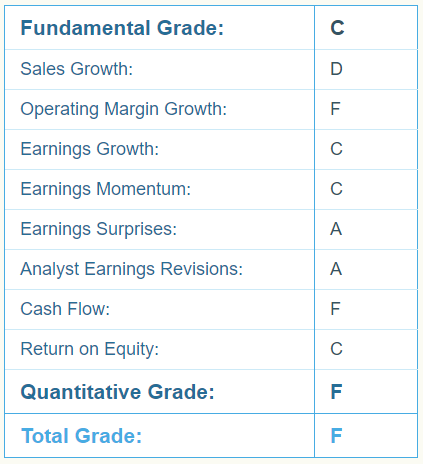 It receives poor marks for its Sales Growth, Operating Margins Growth, Earnings Growth and Earnings Momentum. And even worse, it receives an F-rating for its Quantitative Grade. So, even though the stock has moved higher over the past month, there’s been no significant increase in buying pressure. This tells us that the “smart money” is still staying far, far away.

The Right Way to Play the A.I. Trend

So how do you play this growing A.I. trend? Well, it’s not with Microsoft or Google, either. Yes, they rate higher in Portfolio Grader – Microsoft receives an A-rating and Google holds a C-rating – but the real money isn’t going to be made there. It’s going to be made with the company that provides the A.I. technology for all of them.

I call this the A.I. Master Key.

It is the company that makes the “brain” that all A.I. software needs to function, spot patterns, and interpret data.

It’s known as the “Volta Chip” — and it’s what makes the A.I. revolution possible.

Ron Baron, billionaire money manager with one of the biggest estates in the Hamptons.

Ken Fisher, author of The Ten Roads to Riches and other bestsellers, who’s made the Forbes 400 Richest Americans list.

Mario Gabelli, namesake of the Gabelli Funds, with a salary of $85 million for one year — Wall Street’s highest paid CEO.

And some of the biggest companies are also its customers, including Google, Microsoft, Amazon (AMZN), Baidu, Facebook (FB), Tesla (TSLA) and Alibaba (BABA).

So it doesn’t really matter which competitor wins the A.I. race, because this company’s technology is used by all of them; therefore, its investors will profit off of all the A.I. success.

I’ll tell you everything you need to know, as well as my buy recommendation, in my special report for Growth Investor, The A.I. Master Key. The stock is currently sitting pretty with a 40% return on my Growth Investor Buy List, but it still under my buy limit price — so you’ll want to sign up now; that way, you can get in while you can still do so cheaply.