December certainly started off on a weak note. After a tremendous November, which included the S&P 500 hitting 13 highs, the S&P 500 and Dow have fallen more than 1.5% since December began.

A big chunk of that weakness came today, with the Dow at one point down more than 400 points. The main catalyst behind the selling was President Trump’s comments during the London NATO summit, where he said that he had “no deadline” for the U.S.-China trade deal and may not sign the phase one trade deal until after the 2020 election.

Remember, leading into the Thanksgiving holiday, Wall Street was optimistic that a U.S. China trade deal would finally be inked. Trade negotiators from the U.S. and China spoke on the phone and mutually agreed to continue the trade talks.

Clearly, Wall Street was not pleased with President Trump’s statements today. So, stocks sold off as a result.

Financials and energy stocks, in particular, were crushed. However, this wasn’t surprising. Remember, both sectors outperformed in November, but this was because of another mean reversion/short covering, or “crap” rally, as I like to call them. As I discussed last month, this is when investors buy weak stocks with little upside that might pop briefly, rather than stocks with strong momentum and plenty of future upside.

Enphase Energy is a semiconductor that is vital to the solar energy industry since it makes microinventer systems. (Microinverters sit underneath solar panels and convert all the sunshine to actual electricity for homes and businesses.)

So, it’s no surprise that ENPH holds an A-rating in Portfolio Grader given the demand for its products and growth potential. 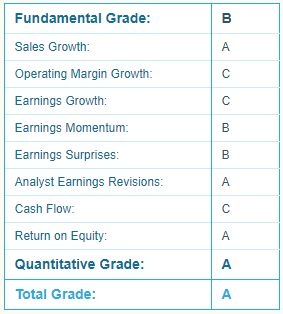 As you can see above, ENPH earns top marks for both its Fundamental Grade and Quantitative Grade. Sales growth is especially impressive. For the third quarter, it reported that third-quarter revenue soared 130.8% year-over-year to $180.06 million, up from $78 million in the same quarter a year ago. Looking forward to the fourth quarter, Enphase Energy expects revenue between $200 million and $210 million, or 116.7% to 127.5% annual revenue growth.

Since my recommendation on November 8, the stock has surged about 29%. And given its strong fundamentals and increase in buying pressure, I see significant upside ahead. I’ll talk more about this stock in my Breakthrough Stocks December Monthly Issue this Friday, so make sure to sign up here so you can get all the details.

One of the Strongest Months of the Year

Now, if you’re still nervous about investing in the stock market following today’s gyrations – don’t be. The reality is that December is one of the strongest months of the year for the stock market. In fact, according to Bespoke, December is the “most consistently positive month” for the past 100 years. The Dow has gained an average 1.44%, and the index has posted gains 73% of the time during the month over the past 100 years.

Taking a shorter-term view, the results are equally as positive. In the past 50 years, December has been the second-strongest month of the year. The Dow has climbed an average 1.45% over this timeframe. And in the past 20 years, the Dow has risen an average 1.03% in December. For the S&P 500, the index has increased an average of 1.5% since 1983.

So, I view the recent weakness as an excellent buying opportunity. And I look for my Breakthrough Stocks to do exceptionally well. My Buy List is stacked with fundamentally superior stocks that are in prime position to benefit from the early January effect and the international flight to quality. I’m so optimistic that I am recommending two new buys in my Breakthrough Stocks December Monthly Issue on Friday. Click here to sign up now so you don’t miss out!