Every bull market faces its share of skeptics. That’s especially true of this one – which has turned out to be the greatest yet!

I remember back in 2017, people were saying, “Surely stocks have gone as high as they can go.” Those were the days of the post-election “Trump Rally”…and to many, the 20,000 level on the Dow looked like the ceiling. Well, to me, it looked like a launching pad for the market to go even higher.

And now I’m looking for a further run to Dow 40,000. It’s the centerpiece of my market forecast for 2020. Why? Because three specific economic factors are putting a strong wind at the market’s back.

All along, the Federal Reserve has played a major role in sustaining this bull market. After dabbling with some key interest rate hikes in 2018, the Fed then reversed course and cut rates multiple times in 2019.

Rate cuts were, for one thing, their mandate from President Trump. And in the bigger picture, this is a data-driven Fed – and there were some signs of an economy that’s cooling off, like mixed jobs reports.

So, the Fed has been crystal-clear that it “will act as appropriate to sustain the expansion,” as Chairman Jerome Powell put it this summer. As long as the Fed stays that course, each move will help fuel the market’s breakout to Dow 40,000.

But what’s happening with interest rates is much bigger than any single rate cut. Even when the Fed was attempting to prod rates higher (to stave off inflation), the 10-year Treasury yield collapsed, as you see here: 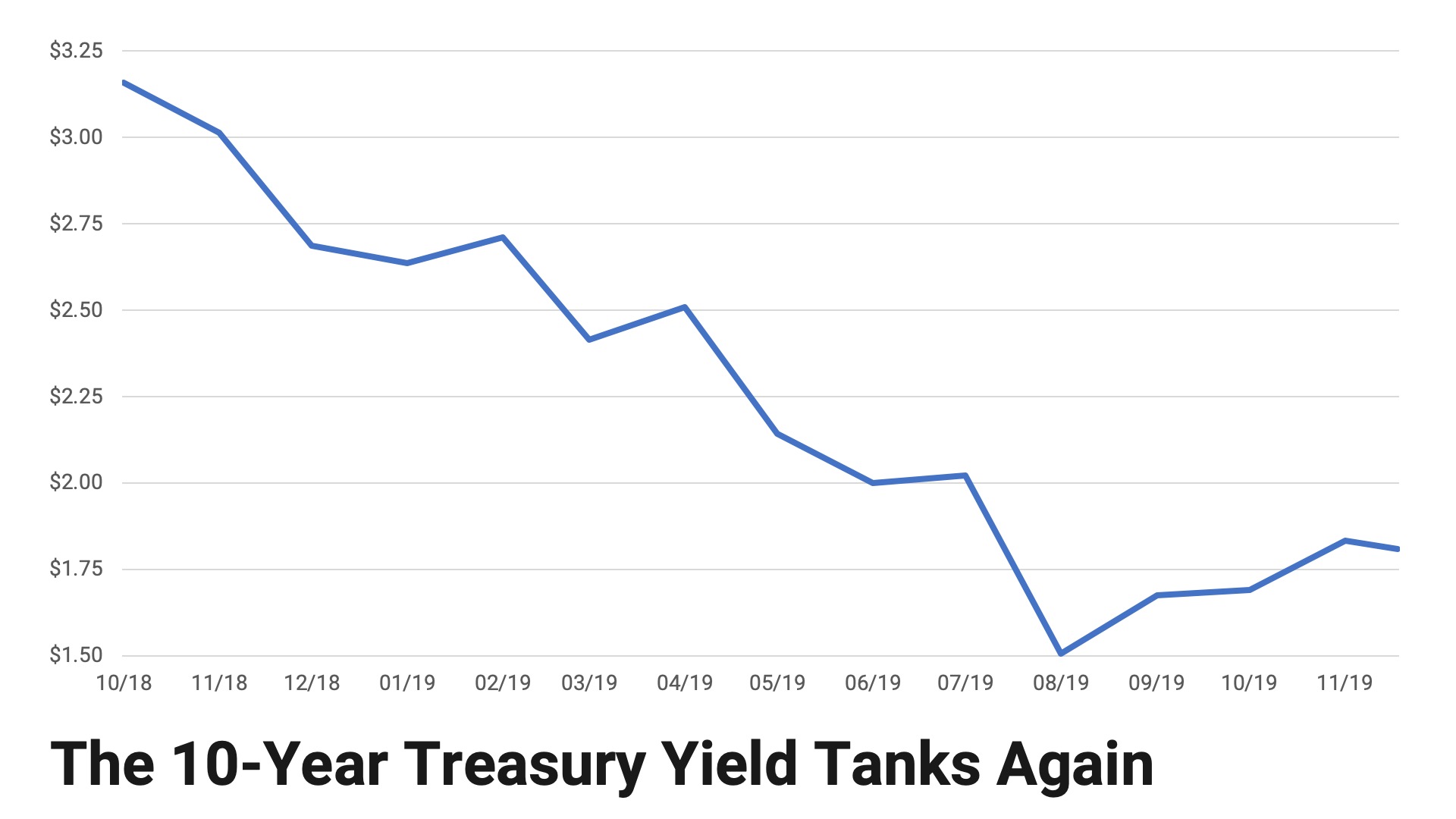 When the 10-year briefly touched 3% during the market sell-off late in 2018, I told readers it wouldn’t last, saying “I think within a couple of weeks, everything’s going to be back to normal.” Sure enough, it cratered and now sits well below 2%.

At this level, the 10-year is actually yielding about the same as the average S&P stock – which means that more than half of them now pay better dividends than a Treasury!

That’s one major reason that I’m saying full speed ahead on the market’s strongest stocks. Every money manager knows that you need income to smooth out your portfolio returns. If bonds don’t provide it, the “smart money” is more than happy to look for yield on Wall Street.

And besides the Fed, there’s another reason rates are going to stay low, no matter what. Which brings me to:

Europe is a mess right now, both politically and economically. As a result, Europe is absolutely drowning in negative yields:

Yes, that’s right: HALF of all European government bonds are yielding less than nothing!

And European Central Bank President Mario Draghi is unable to raise them, because European economies are stalled: Even Germany is teetering on the brink of recession, with just 0.1% GDP growth in the third quarter.

Draghi even remarked that “In the absence of improvement…additional stimulus will be required,” meaning that restarting the ECB’s massive quantitative easing program is on the table.

That statement immediately pushed European rates even lower. Nowadays, there are trillions of dollars’ worth of negative-yielding bonds worldwide:

That includes Austrian and French 10-year government bonds, which just fell into negative territory for the first time ever. And investors are so desperate for safety that they’ll buy trillions of bonds that are guaranteed to lose money!

After all, nationalist parties all over Europe are dealing a stunning blow to establishment politics, meaning the EU could be headed for a meltdown.

All of this chaos creates fear that weakens European currencies, drives down bond yields – and causes huge amounts of capital to flee Europe.

Much of that global capital flowed to U.S. Treasuries, but with those yields falling, too, it’s flowing to U.S. stocks as well.

And it’s not hard to see why investors feel comfortable doing so:

Right now, the United States is enjoying its longest economic expansion in history, as you see in the chart below. It remains one of the strongest economies around.

With the 2020 election on the horizon, President Trump is going to be as supportive as he can. His highest approval ratings are for his handling of the economy – and he’s up for a second term.

On Twitter, on TV, and any way he can, President Trump will spend the next year aggressively promoting the U.S. economy. That includes keeping the pressure on Fed Chair Powell to keep rates low.

It also includes slashing regulations and keeping China at the negotiating table, with the goal of ending the U.S.-China trade war in time to give the economy – and the markets – another big boost before the November elections. There are even rumors of another tax cut.

Bottom line: Powerful people are backing the U.S. economy, upending the bureaucratic status quo in Europe, and keeping interest rates in the basement.

It all adds up to a stock market that’s more and more attractive through 2020.

That’s especially true of the high-quality stocks I’ve got my eye on for the year ahead.

And remember: The market is forward looking. The more people’s thoughts turn to 2020, the more they’re going to rush in and propel these elite stocks higher. Make sure you’re first on the bandwagon. I’d say you’d want to take a look at my 2020 strategy and get positioned no later than December 1st.

P.S. Have you noticed how all that talk from the doom and gloomers about a looming U.S. recession has just disappeared?

The truth is we have one of the strongest economies on the planet. We’re enjoying the longest economic expansion in U.S. history, as I showed you earlier.

And we have two powerful forces hellbent on keeping the party going: a supportive Federal Reserve and our “Cheerleader in Chief,” President Trump.

Those extremely powerful forces are coming together to help fuel another massive market breakout that will have us at Dow 40,000 in no time.