I’d like to go on the record about energy stocks right now because there’s some news going on that might, on the surface, sound bullish for the sector. However, it’s really only good news for a very limited number, as we’ll see.

I’m talking about the upcoming IPO of Saudi Arabia’s state-owned oil & gas operation, Saudi Aramco, which was just announced for December. Ahead of the long-awaited IPO, Saudi Aramco has been cutting production since mid-2018. Due to the laws of supply and demand, this gives a nice lift to oil prices. (That’s especially true when, as rumor has it, the Saudis are about to pressure the restof OPEC for more cuts next month.)

However, when you see oil prices rise – like they did earlier this month, by 8% – that’s no reason to rush in.

For one thing, there’s a lot going on outside of OPEC that could have the opposite effect! Guyana, a new oil producer, is about to come online; Brazil and Norway are about to have new fields come online, too. And we in the United States are producing more oil, too. Let’s not forget: the United States is actually the biggest oil producer and has been for over a year now!

Speaking of the United States, you’ve also got election risks to consider as well. If somebody like a Tom Steyer arises, or even Elizabeth Warren, it’s going to hurt the energy stocks. Tom Steyer is anti-pipeline, anti-natural gas, and, of course, anti any fossil fuel. He was a trustee at Stanford, where he stopped all energy investments. A lot of states don’t invest in energy anymore, either.

In the meantime, though, elections are good for the stock market, because the politicians are going to run around and promise us everything and anything. And for stocks, that’s a rising tide that tends to lift all boats.

But for energy stocks – as with anything else – you’ve got to look at which companies can produce superior earnings going forward.

In the realm of oil & gas, that’s just not the exploration and production (E&P) companies. As much as the Saudis are fighting it, there’s a worldwide supply glut of oil. And the more companies pump and pump to try to win out, the lower prices will go. So, E&P companies simply can’t make their earnings in that environment.

Pipeline companies, however, most certainly can.

Remember, they’re the “toll-takers.” They make their money not from oil prices themselves, but the fees they charge to transport all that oil. So if more oil is pumping, pipelines are the biggest winners.

Pipelines are a great business…especially for investors seeking income. So, even when other energy stocks don’t make the grade, pipelines tend to be a staple of my Elite Dividend Payers Buy List at Growth Investor.

Right now, CNX Midstream Partners L.P. (CNXM) makes the grade. CNXM is in the natural-gas business, but it is on the terminal pipeline side. So, even with these low gas prices, it’s benefitting from shipping more natural gas. In the October earnings report, we learned that revenues and earnings both gained more than 20% year over year.

Relatedly (and more importantly), CNXM is a dividend stock that keeps increasing its dividend. The third-quarter dividend represents a 15% year-over-year increase, as well as the 18th-straight quarter that the company has upped its dividend.

So, if you’re looking to invest in energy, you may as well ride out the volatility with a stock like this.

Here is CNXM’s Report Card from my Dividend Grader: 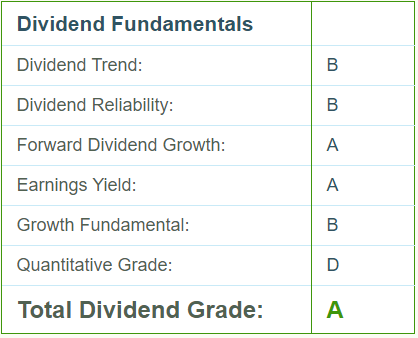 CNXM’s Quantitative Grade tells us that it’s not getting a lot of attention on Wall Street right now. But when you’ve identified a great income investment, there’s a silver lining to that: You get the chance to pick up shares at a bargain price.

And as you can see above, CNXM does qualify as a great income play. Its fundamentals, Dividend Trend, and Dividend Reliability are all strong. And it gets top marks for both Earnings Yield and Forward Dividend Growth.

Listen, my flagship newsletter is Growth Investor. I demand growth from any stock – and that’s true of dividends, too. So with CNXM, you not only get a discounted buy, for a current forward dividend yield of 11.5%! You also get the prospect of bigger payouts in the future.

That being said, CNXM is just below my preferred buy price now, and I don’t expect it to stay there much longer. To hear more on my dividend strategy, click here now.