What an interesting fourth quarter it’s been so far! While the stock market has hit new record high after record high, the leadership behind the rally is different. What do I mean by that? This time it’s not growth stocks, but value stocks leading the charge.

This isn’t because value stocks are the better investments. Rather, it’s because of another mean reversion rally/short covering, or “crap” rally, as I like to call them. This is when investors buy weak stocks with little upside that might pop briefly, rather than stocks with strong momentum and plenty of future upside.

As you may recall, I talked about this in September. Bespoke found that the worst-performing 50 stocks from the market’s last all-time high became the best-performing stocks. 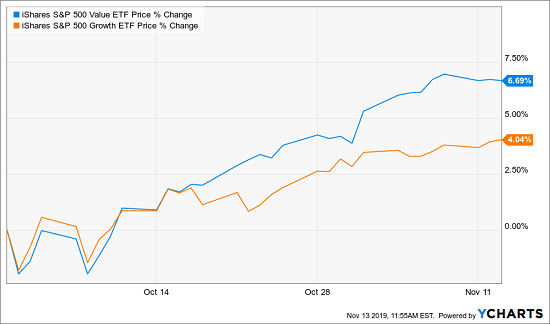 Now, before you run out and fill your portfolio with value stocks, I’ll ask you to pump the brakes just a little bit. Yes, I know the financial media is hammering the table on value right now. CNBC is a great example of this. Last Friday, it released an article about JPMorgan Chase’s (JPM) top quantitative analyst saying that the rotation into value stocks “is a once in a decade trade.” But the truth is this is just another mean reversion rally.

Let’s take financials as an example. While the Financial Select Sector SPDR (XLF) climbed almost 9% during that same time period, this was nothing more than a mechanical bounce. You see, the banks’ forecasted earnings weren’t very good, but they’ll do better on a steeper yield curve.

All that said, a mean reversion rally isn’t necessarily a bad thing because it means that money isn’t leaving the market, it’s just sloshing from one side to the other. If anything, it’s helping build a foundation under the market to launch. And boy do I expect this market to launch.

In the meantime, whenever we’re experiencing a mean reversion rally, that’s the time to invest in the high-quality stocks. But if you’re not sure which stocks are truly the best, I can help you with that. The financial media loves to throw out a lot of ideas and trends – they sure had no problem hyping up IPOs like Uber (UBER) and WeWork, which ended up being complete disasters – and you can end up losing a lot of money that way.

For November, I really like small-cap growth stocks. We often get a liquidity injection, which causes small-cap stocks to “melt up.” They also have the early “January effect” working in their favor. This is when yearend pension funding and annual gift giving zero in on fundamentally superior small-cap stocks.

I’m so confident in the potential strength in small caps, I released six brand-new recommendations in my Breakthrough Stocks service just last Friday. I expect these stocks to rally nicely in the coming weeks as Wall Street returns its focus on companies with strong fundamentals, earnings and sales growth with positive future guidance.

There is a catch, though: The best time to buy is the week before Thanksgiving, and that week is fast approaching.

So, the best window to buy is closing soon!

You’re going to want to get into position now so you don’t miss out on the next leg higher. To get started, you can get the six names here.